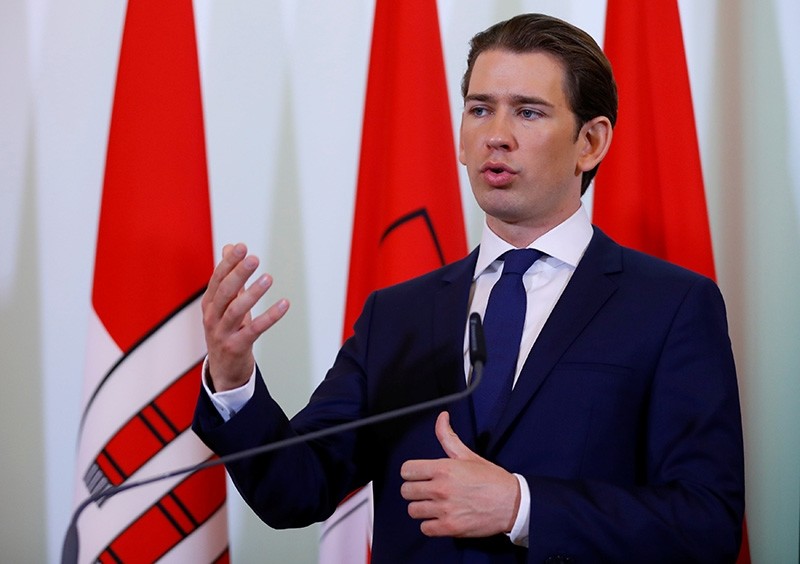 Austria's anti-Turkey Chancellor Sebastian Kurz threatened to close one of the biggest mosques in Vienna and urged municipal authorities to be stricter regarding state subsidies for Muslim organizations in the city, reports said.

Kurz, who is known for his Islamophobic and anti-Turkey stance, criticized a commemoration event held in a Turkish mosque back in 2016, where children dressed up as Turkish soldiers took part in a reenactment of the World War I battle of Gallipoli.

"What took place... here has no place in Austria. There will be zero tolerance from the government," Sebastian Kurz told reporters. "This government will deal with these negative developments with full force."

The rightwing Kurz, 31, said that under Austrian law, the mosque could be closed.

His chief of staff Gernot Bluemel said on Tuesday that he had ordered the Kultusamt, the religious affairs authority, to conduct a "very thorough" probe.

The photos, published by the Falter weekly, showed the young boys in camouflage uniforms marching, saluting, waving Turkish flags and then playing dead.

The 1915-16 battle of Gallipoli, known as the Battle of Çanakkale in Turkish, saw the Ottomans resist an Allied invasion.

Turkey's relations with Austria have long been strained, with Kurz calling on the European Union to break off negotiations on Ankara joining the bloc.

The young Austrian leader is the head of the conservative People's Party of Austria (ÖVP) and was sworn in as prime minister on Dec. 18 after general elections in October. Earlier in December, a coalition was formed between Kurz's ÖVP and the Austrian Freedom Party (FPÖ) after eight weeks of intense negotiations. The FPÖ's neo-Nazi connections caused concern in Austria and other EU countries. They have pledged to stop illegal immigration, cut taxes and resist EU centralization.

He recently came under fire after proposing to ban the Muslim headscarf in schools.