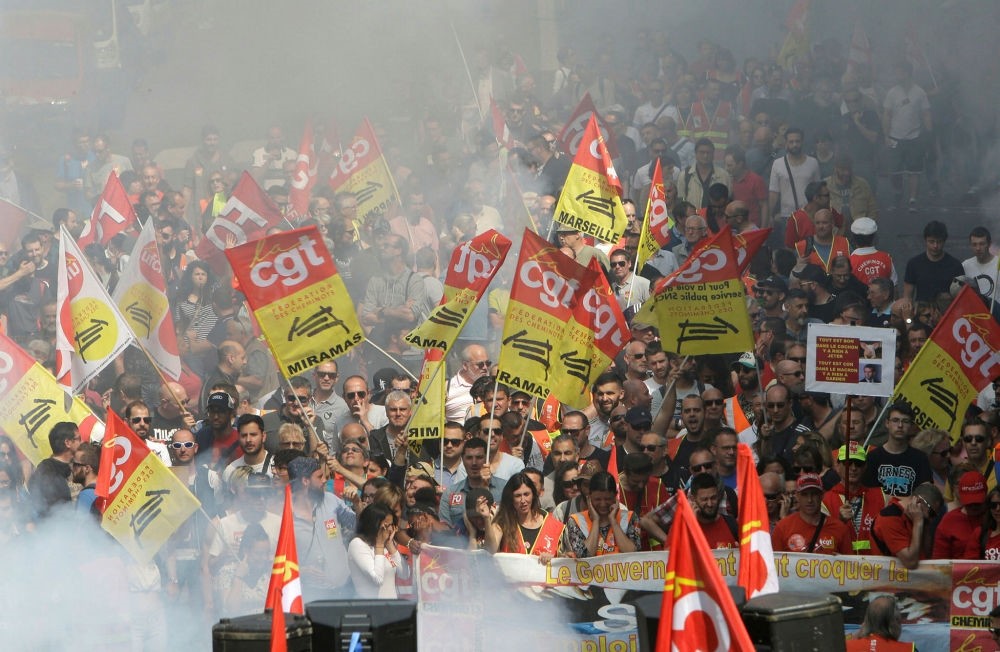 Macron's presidency is still being challenged on multiple fronts as a joint show of force by anti-Macron groups, including students and labor unions, sought to broaden resistance to hard-hitting reforms

The demonstrations broadened yesterday as scores of government-employed staff and workers from other sectors joined SNCF workers after unions increased pressure on the government by urging workers from all sectors to unite in a show of force. Thousands took to the streets in the southern city of Marseille, while several other demonstrations were scheduled in cities across France, including a march through Paris.

France's far-left CGT labor union sought to broaden resistance to hard-hitting economic reforms on Thursday, urging employees across the public sector to join striking railway workers in their showdown with President Macron. The CGT's goal is a "convergence des luttes" or "convergence of struggles" - a storm of public discontent where protests of different origins fuse into one widespread upheaval against government, something like in May 1968 or more recently at the end of 1995.

Macron's presidency is being challenged on multiple fronts, but the centrist president has repeatedly said he won't cave in under pressure, arguing that he was elected president last year to reform the country. Pressure has been mounting on Macron nearly a year since the 40-year-old centrist swept to power, with a survey by Ifop-Fiducial released Wednesday suggesting that 58 percent of voters were unhappy with his presidency. He has stood firm and on Wednesday urged the unions to "stop holding the country hostage." His government hopes union divisions will ultimately work in its favor, and the lower house of parliament this week approved the bill that enshrines most of the envisaged SNCF reforms.

Public support for the SNCF protest is weaker than for all but one of several dozen major protests over the last 20 years in France, according to an Ifop poll published last Sunday. It showed 42 percent were sympathetic to the strikers. That compared with much bigger support rates of two-thirds or so when strikes in late 1995 waged by rail workers snowballed into a broader public sector protest movement, forcing the government of the time to abandon rail and welfare reforms.

Meanwhile, just four of France's 70 universities remain blocked, with a court ordering protesters at the university in the southern ci

ty of Montpellier, where the movement started, to clear out immediately or face eviction. But the student revolt caught hold Wednesday at the prestigious Sciences Po university in Paris, Macron's alma mater, against the plan to introduce admission criteria and student rankings, ending guaranteed admissions for anyone with a high school diploma.