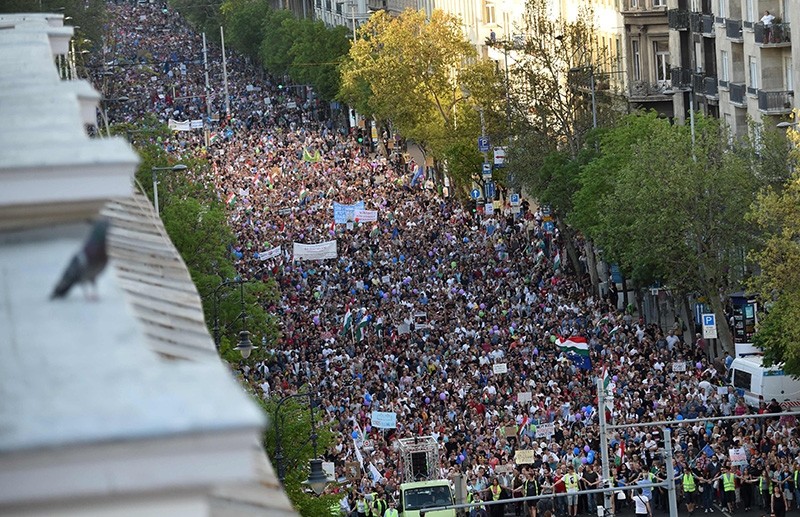 Tens of thousands of Hungarians took to the streets in Budapest for a second consecutive Saturday to protest against newly re-elected Prime Minister Viktor Orban.

The crowd marched through the city to a rally where speakers demanded a non-partisan public media.

Campaigning hard against immigration, the 54-year-old Orban's overwhelming victory April 8 saw his Fidesz party secure around half the vote.

But among criticisms regarding the fairness of the election, observers from the Organisation for Security and Co-operation said the campaign was marked by media bias.

As part of sweeping reforms since he came into power in 2010, Orban has turned the public media channels into what his critics call "government mouthpieces."

Many of the demonstrators, most of whom were young, chanted "democracy" and brandished Hungarian and European Union flags.

An organizer, Viktor Gyetvai, 20, told AFP the protest "was not going to change the system overnight" but was aimed at sparking a "civil movement" to challenge Orban.

"These are first steps, a sign that there are many Hungarians who want to live in a democracy, with independent institutions and a free media," said Gyetvai.

More demonstrations will be held in provincial cities in coming weeks, he added.

Last Saturday some 100,000 protestors held a protest in Budapest days after Orban's win.

The victory handed Orban his third consecutive two-thirds parliamentary majority and a legislative free rein for the next four years.

Since then Orban has signaled an escalation of his long-running onslaught on non-governmental organizations (NGOs) linked to the liberal U.S. billionaire George Soros.

Orban accuses the Hungarian-born 87-year-old of wanting to destroy Europe though mass immigration.

A pro-Orban newspaper recently published a list of some 200 "Soros mercenaries" that included staff at NGOs, universities and investigative journalism websites.

A vote on a controversial "Stop Soros" package of bills targeting NGOs is likely to be among the first to pass through parliament after it convenes May 8.

The package apes similar laws in Russia and would slap taxes on foreign-funded NGOs that "support" illegal immigration.

Under the proposals, foreigners deemed to support asylum seekers could be stopped from entering Hungary, NGO staff face being barred from approaching border areas and organizations will undergo "security tests."

Soros's Open Society Foundations (OSF) network said Friday it is considering moving its office from Budapest, possibly to Berlin, if the laws are approved.