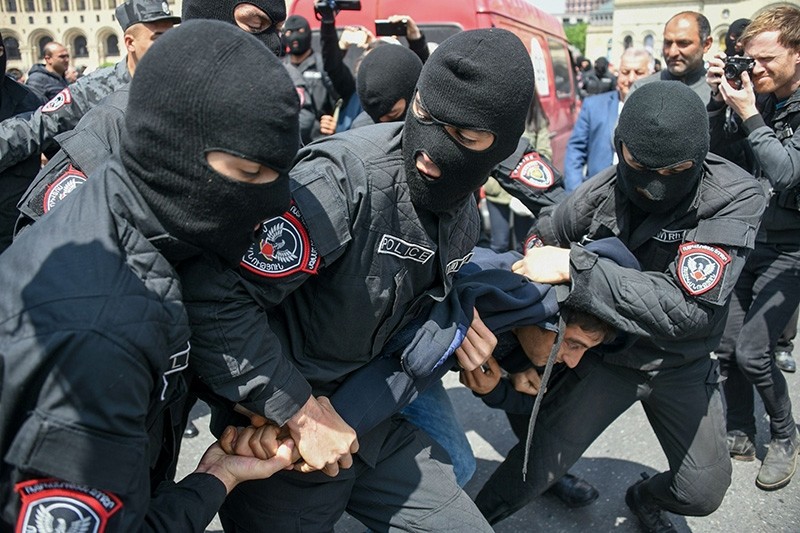 Armenian policemen detain an opposition supporter during a rally in central Yerevan (AFP Photo)
by Apr 23, 2018 12:00 am

Hundreds of opposition supporters took to the streets of Armenia's capital Monday amid rising political turmoil as the whereabouts of the protest leader remained unclear a day after he was detained.

On the 11th day of the protests in the ex-Soviet country, young men in small groups briefly blocked roads and shouted slogans such as "Join us!" and "Victory" and the name of protest leader Nikol Pashinian as drivers beeped their horns in support.

Tens of thousands also rallied in the capital of Yerevan over the weekend to protest the rule of Prime Minister Serzh Sargsyan, the country's former president.

The whereabouts of protest leader Nikol Pashinyan, a parliamentary lawmaker, were unclear after he was detained on Sunday.

His lawyer Rustam Badasyan wrote on Facebook: "There is no answer to the question where he is."

As a lawmaker, Pashinian is protected by parliamentary immunity and cannot be arrested without the approval of fellow lawmakers.

The speaker of the country's parliament, the National Assembly, met Pashinian and the other detained politicians overnight, however, the parliament's spokesman told AFP, without giving details.

The speaker Ara Babloyan was quoted as saying that he urged Pashinian and the others "to take part in real talks."

Pashinian and two other opposition politicians "were detained as they were committing socially dangerous acts," the prosecutor general's office said in a statement on Sunday.

Sargsyan earlier on Sunday stormed out of tense televised talks with Pashinian, the leader of the Civil Contract Party, accusing him of "blackmail."

Pashinian last week announced the "start of a peaceful velvet revolution" in the landlocked country of 2.9 million people.

Hundreds of people were detained at protest rallies held across Yerevan on Sunday, while on Monday the Investigative Committee, which probes serious crimes, said that 26 had been detained on suspicion of "hooliganism" and use of violence against police.

Sargsyan was elected prime minister by lawmakers last week under a new parliamentary system of government that transfers power from the presidency to the premier, while the president becomes largely a ceremonial role.

Sargsyan, a shrewd former military officer, was first elected as president of the impoverished Moscow-allied country in 2008.

After that poll, 10 people died in bloody clashes between police and supporters of the defeated opposition candidate.

He was re-elected in 2013, with his second and final term ending April 9.