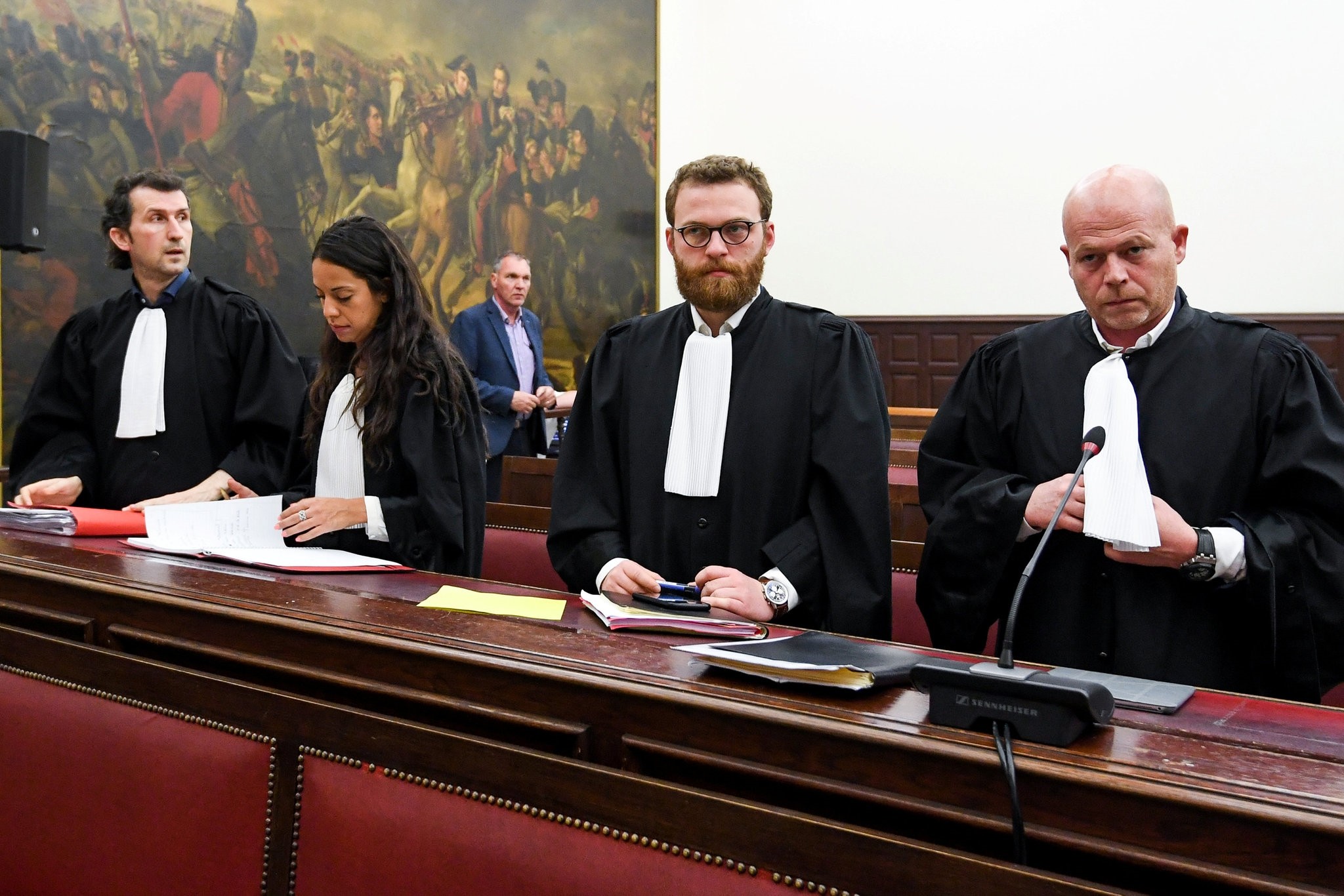 Sven Mary and Romain Delcoigne, Belgian lawyers representing Salah Abdeslam, look on in the courtroom prior to announcement of the sentence in the trial of Abdeslam and co-defendant Sofien Ayari, in Brussels, Belgium April 23, 2018 (Reuters Photo)
by Compiled from Wire Services Apr 23, 2018 12:00 am

A Belgian court sentenced Paris terror attacks suspect Salah Abdeslam and a co-accused to 20 years in prison on Monday for trying to kill police during a terror attack in Brussels in 2016.

Abdeslam's co-defendant Sofiane Ayari received the same sentence after the pair were convicted of terrorism-related attempted murder over the shootout in which four police officers were wounded.

Judges at the court in Brussels said that "there can be no doubt about their commitment to radicalism" as they handed down the maximum jail term demanded by Belgian prosecutors at the trial in February.

Neither Abdeslam, 28, a Belgian-born French national, nor Ayari, a 24-year-old Tunisian citizen, was in court to hear the verdict.

Abdeslam is in a French prison awaiting trial for his role in the Daesh terrorist attacks in Paris in November 2015 in which 130 people were killed. Prosecutors say he is the lone survivor of a suicide squad.

The pair were convicted of opening fire on a team of Belgian and French police who raided a flat in the Forest area of Brussels on March 15, 2016, following a tip-off about the Paris attacks. A third jihadist was killed in the raid.

At the time Abdeslam was regarded as the most wanted man in Europe.

On March 22, suicide bombers from a cell linked to the Paris attacks killed 32 people and wounded hundreds more at Brussels airport and a metro station in the Belgian capital.

Abdeslam's lawyer Sven Mary told reporters outside the court that he would consult with his client at the prison where he is being held in France "and then we will see if he wants to lodge an appeal."

He said Abdeslam would likely have to serve the full Belgian 20-year term on top of any sentence that arises from the French trial over the Paris attacks.

Monday's judgment said a total of 34 shots were fired during the shootout.

Abdeslam has spent most of the last two years in jail in France.

He was transported to the court from France for the start of the trial in February amid tight security including a helicopter escort, while Ayari is in jail in Belgium.

Abdeslam refused to attend the rest of the proceedings.

Investigators say Abdeslam's arrest spurred the Brussels bombers to bring forward the 2016 attacks, which had originally been planned for a later date, as they feared their capture.

Prosecutors have said that DNA links Abdeslam to the apartment in the Forest district of Brussels where the shooting took place, but not to the weapons that were used.

After Abdeslam refused to return to court for the trial in February, Mary sought the case's dismissal on a technicality over how the judges were named to investigate the gun battle, and said media leaks had denied him a fair trial.

But lawyers for police wounded in the gun battle accused Abdeslam of "mocking" the trial.

One of the injured police officers was still suffering from after-effects including brain lesions, epileptic fits and vision and balance problems.

An organization representing victims of the Brussels attacks and their families is seeking symbolic damages of one euro.