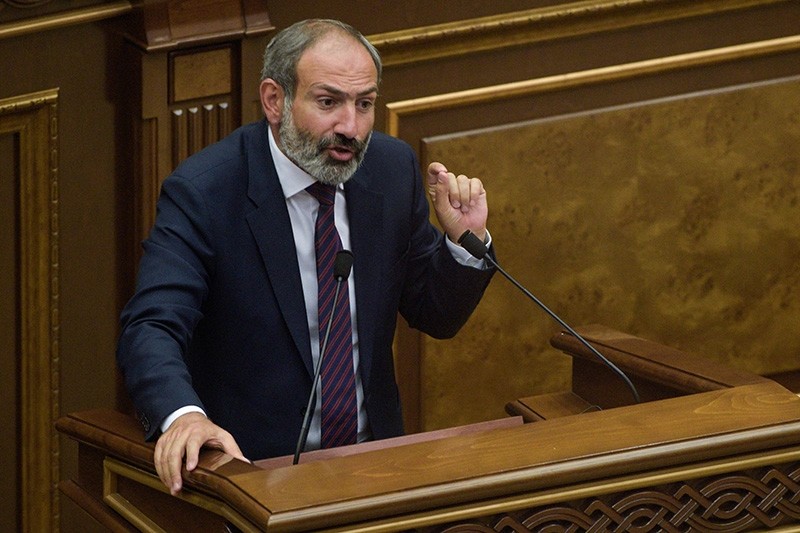 Armenian opposition leader and the only candidate for the post of prime minister Nikol Pashinian answers lawmakers' questions at the extraordinary session of parliament to elect a new prime minister in Yerevan on May 1, 2018. (AFP Photo)
by Associated Press May 01, 2018 12:00 am

Armenia's prospective next prime minister warned Tuesday that the country will be plunged into a deep political crisis if the ruling party fails to support his candidacy.

Opposition leader Nikol Pashinian, who has been nominated for prime minister, told lawmakers that Armenia will be swept in a "political tsunami" if the ruling Republic party fails to support him.

The Armenian parliament is expected to vote on a new prime minister later Tuesday. Pashinian is the only candidate but the chamber is controlled by the ruling party, and Pashinian needs their votes to win.

Pashinian led more than two weeks of anti-government protests that forced Serzh Sargsyan, who led Armenia as president for 10 years and was elected prime minister in mid-April, to resign. The opposition in this Caucasus Mountains country saw Sargsyan's move into the prime minister's chair as an attempt to stay in power indefinitely.

Tens of thousands of people have packed the square outside to show their support for Pashinian.

The Elk or "Exit" opposition alliance formally announced Pashinian's nomination at the start of the session, and the opposition leader himself later took the floor to answer the deputies' question before the vote was to be held.