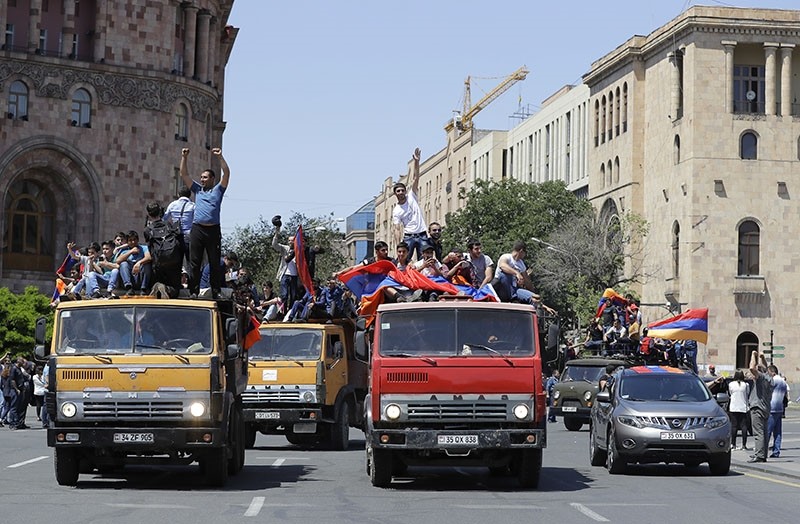 Supporters of opposition lawmaker Nikol Pashinian react standing on top of vehicles as they protest in Republic Square in Yerevan on Wednesday, May 2, 2018. (AP Photo)
by Compiled from Wire Services May 02, 2018 12:00 am

Armenian protesters blocked some routes into the capital, Yerevan, and a road to the airport on Wednesday after Nikol Pashinian, blocked in parliament from becoming prime minister, announced a nationwide campaign of civil disobedience.

Days of protests in the small ex-Soviet state have created a standoff between Pashinian's supporters, who have mobilised thousands of people to take to the streets, and a ruling elite which is determined to hold on to power and still controls the security apparatus.

The ruling Republican Party thwarted Pashinian's bid to take over as prime minister on Tuesday.

Pashinian then urged his supporters to launch a campaign of civil disobedience and block key transport links including an airport.

"From 8:15 am tomorrow (Wednesday) all roads should be blocked, I announce a general strike," Pashinian told tens of thousands of supporters gathered in the capital Yerevan's Republic Square.

"A revolution of love and tolerance is continuing," he said, also urging people to turn out for a huge rally Wednesday

"We will be staying here," David, 19, one of those who blocked the road to the airport, told Reuters. Protesters also blocked several junctions in the city centre and around some state agencies.

Hundreds of students started to march in Yerevan, waving flags and shouting "Nikol — prime minister!", while drivers sounded their car horns in support.

"We will paralyze the whole city and the whole country," said Sargis Babayan, a 22-year-old student wearing a T-shirt with Pashinian's portrait.

Police tried to persuade protesters to open roads, but did not use force.

Veteran leader Serzh Sargsyan stepped down as prime minister last week. That seemed to signal a dramatic shift in power in Armenia, the South Caucasus state closely aligned to Russia that has been run by the same cadre of people since the late 1990s.

The crisis in Armenia, which has a population of only about three million people and has Russian military base on its territory, is being closely watched in Moscow.

Officials there are wary of a repeat of a popular revolt in Ukraine in 2014 that swept to power new leaders who pulled away from Moscow's orbit.

Pashinian, a 42-year-old former journalist who spent two years in jail for fomenting unrest after the presidential election in 2008, was put forward to parliament as the only nominee for the vacant prime minister's job.

But the Republican Party, allied to Sargsyan, has a majority in the legislature and after hours of acrimonious debate it withheld its support for Pashinian, leaving him short of the support he needed.

Protests flared when Sargsyan, an establishment veteran, announced he was seeking to become prime minister. He had previously been president, but was limited by the constitution from seeking another term.

Some Armenians saw Sargsyan's bid for the prime minister's job as a cynical ploy to extend his grip on power. Some voters accuse Sargsyan and his associates of cronyism and corruption, allegations they deny.