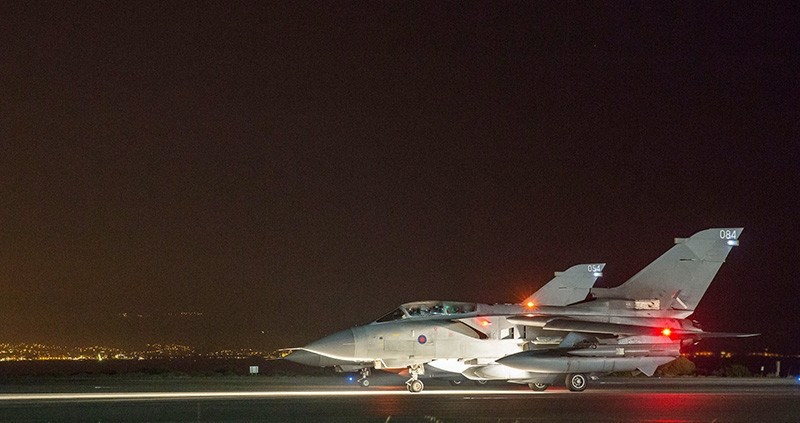 In this image released by Britain's Ministry of Defense, two of four RAF Tornados prepare to take-off from at Britain Royal Air Force base in Akrotiri, Cyprus Saturday, April 14, 2018. (AP Photo)
by May 02, 2018 12:00 am

A British airstrike on Daesh terrorists in Syria unintentionally killed a civilian, London said Wednesday -- the first time it has confirmed a civilian death in the fight against Daesh.

The Royal Air Force strike on three Daesh terrorists in eastern Syria on March 26 also killed a motorcyclist who crossed into the area at the last minute, Defense Secretary Gavin Williamson said in a statement.

It comes a day after the BBC reported that a source inside the coalition fighting the Daesh terror group, as saying he believed civilians had been killed in "several" RAF attacks.

"During a strike to engage three Daesh terrorists, a civilian motorbike crossed into the strike area at the last moment and it is assessed that one civilian was unintentionally killed," Williamson said.

"We reached this conclusion after undertaking routine and detailed post-strike analysis of all available evidence," he said.

A Ministry of Defense statement on March 26 had said of the attack that a Reaper remotely-controlled aircraft had tracked "a group of terrorists in a vehicle" in the Syrian Euphrates valley and "successfully destroyed it and its occupants with a precision Hellfire missile attack."

Wednesday's statement also gave details about Britain's involvement in the fight against Daesh.

The RAF has conducted more than 1,600 air strikes in Iraq and Syria -- second only to coalition leaders the United States, said the statement.

It said Britain had nearly 1,400 military personnel in the region providing "support to local partners."

"British soldiers have trained over 60,000 members of the Iraqi Security Forces in engineering, medical, counter-IED and basic infantry skills," the statement said.