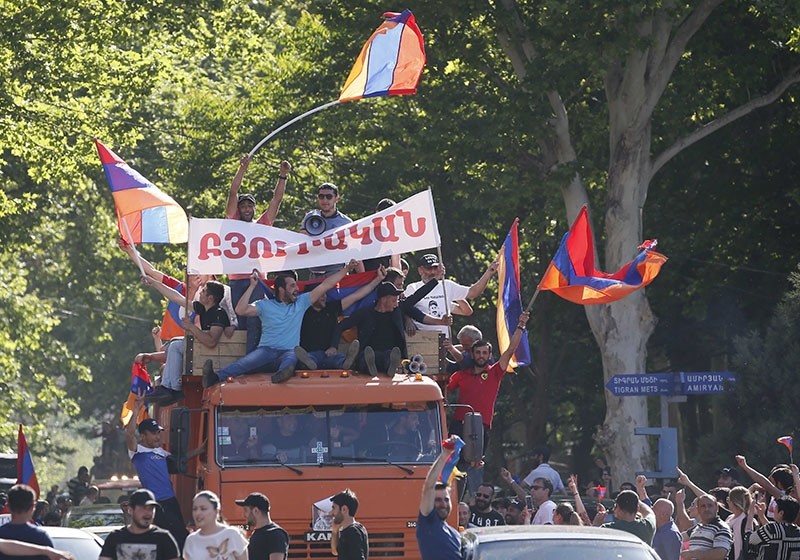 Armenian opposition supporters ride on a truck along a street after protest movement leader Nikol Pashinyan announced a nationwide campaign of civil disobedience in Yerevan, Armenia, May 2, 2018. (Reuters Photo)
by Compiled from Wire Services May 02, 2018 12:00 am

Armenian protest leader Nikol Pashinian has called on his supporters to end a day of blockades that stopped traffic in parts of the capital and reconvene for a rally on a central square, as parliament set a new date to choose a prime minister.

Armenia was plunged into political crisis last month when street protests led by Pashinian elicited the resignation of the prime minister - and former president - Serzh Sargsyan.

Pashinian, an opposition lawmaker who has led the protests, demanded to be named prime minister, but the parliament, where Sargsyan's Republican Party has the majority, rejected his bid on Tuesday.

Protesters used their cars to block major traffic routes throughout Yerevan on Wednesday, the day after Pashinian came up eight votes short of the required 53 in a parliamentary vote for prime minister, even though he was the only candidate.

Pashinian said that move effectively was suicidal for the party.

Parliament Speaker Ara Babloyan on Wednesday announced that the second round of voting in the parliament to elect the country's prime minister will be held on May 8.

In a written statement, Babloyan said: "According to the parliament code, the second round of voting to elect the prime minister will be held on May 8, 12 p.m. [GMT 0800]."

If no candidate is elected in that second round, the parliament will be dissolved, state media reported.

The parliament will hold another vote on naming a prime minister next Tuesday. It wasn't immediately clear if the ruling party would put forth a candidate. Pashinian was the only candidate in the first vote. The ruling party said it wouldn't nominate its own candidate in order to avoid inflaming tensions.

Although the vote against Pashinian in the parliament on Tuesday dashed the opposition's hopes for a quick resolution of the tensions, there were no immediate signs that tempers would boil over into clashes. Pashinian insisted that the demonstrations would continue to be peaceful.

"Police and security services are neutral and if they (government) will bring for example the army to Yerevan, all soldiers will come to us and they will join us. And there is no way for any solution by force," Pashinian said in an interview with the Associated Press.

He told that parliament's rejection of his bid to lead the country had only galvanized the opposition and that if the government brings troops to the capital to quell protests "all the soldiers will come to us and join us."

"Today, our actions are much bigger and there is a big crowd reaction from society and from the people," Pashinian said in the interview.

But he emphasized that Armenia's political crisis can't be resolved by force.

Protesters occupied the city hall in Armenia's second-largest city Gyumri, They shut down all surrounding roads and refused to allow staff into the building, state media reported. Media reports said protesters made some significant highways in the countryside impassable.

The State Revenue Committee warned that the blockages could "present a serious blow to Armenia's food security" and called on protesters not to interfere with food deliveries.

Protesters blocked several government ministries, including the Justice Ministry, was also blocked and the highway to the country's main airport was shut down.

Numerous tourists were seen walking with suitcases on the highway to and from Zvartnots International Airport, state news agency Armenpress reported.

Pashinian's party called for protesters to let ambulances and military vehicles through the blockades.

Armenia's national rail operator, South Caucasus Railways, said in a statement it was suspending goods services and suburban passenger services across the country, citing "unsanctioned blocking of tracks and interference in the operation of rail transport."

Demonstrators were converging in the evening on Yerevan's central Republic Square, where nightly demonstrations over the past three weeks have attracted crowds of tens of thousands.

The protests have plunged the country into political turmoil and led to the resignation of Prime Minister Serzh Sargsyan just days after his appointment.

Sargsyan had led the country as president for 10 years, but stepped down because of term limits. Soon thereafter, parliament named him prime minister under a new government structure that gave the post greater powers. Protesters claimed the move effectively allowed him to remain the country's leader indefinitely.

The demonstrators on Republic Square have been determined but appeared largely cheerful. Scores of protesters carried a mock coffin and then smashed it to the ground Wednesday, symbolizing what they believe is the death of Armenia's ruling party.

In the interview with the AP, Pashinian said that by rejecting his bid to become prime minister, the ruling party had dealt itself a fatal blow.

"I think that the Republican Party yesterday have made a suicide pact, as a party, as a whole," he said.