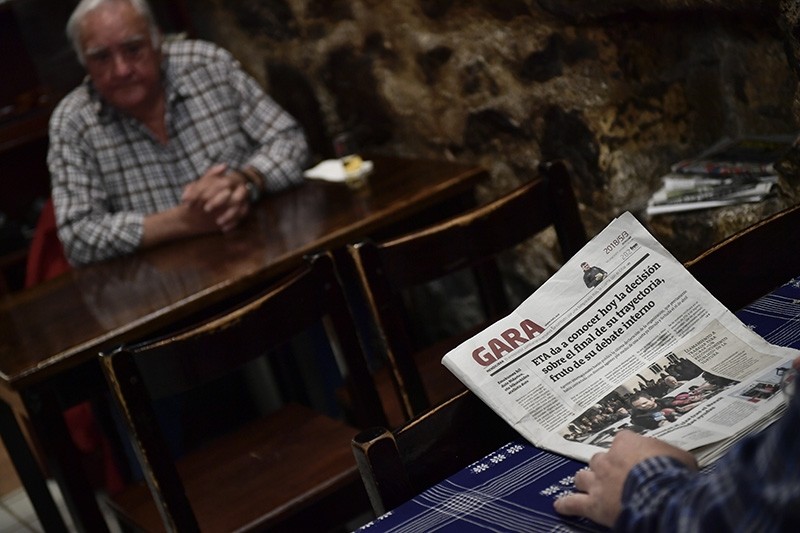 A man reads a basque nationalist newspaper reporting on the dissolution of the Basque armed separatist group ETA, in the small basque village of Hernani, northern Spain, Thursday, May 3, 2018. (AP Photo)
by Compiled from Wire Services May 03, 2018 12:00 am

Spanish separatist group ETA announced Thursday it has ended its armed campaign and political efforts to create a Basque homeland, though the Spanish government vowed to continue prosecuting the organization's militants.

ETA, which killed more than 850 people in its six decades of existence, said in an open letter to the Basque people that it has "completely dismantled all of its structures" and "will no longer express political positions, promote initiatives or interact with other stakeholders."

The letter was published by the Basque news website naiz.eus, a day after the group's intentions were leaked in a letter.

Former militants will keep on seeking a "reunited, independent, socialist, Basque-speaking and non-patriarchal Basque country," but they will do it outside of ETA, the letter said.

A key challenge for left-wing Basque separatists "will be to bring into effect the right to decide, in order to achieve recognition of our nationhood," it added.

But Spanish Prime Minister Mariano Rajoy expressed no sympathy with the Basque dream of self-determination, calling the disbanding of ETA "noise and propaganda."

Rajoy said the group had failed in imposing through violence an independent Basque state.

"Whatever ETA does or says, it won't find any loophole for impunity," Rajoy said. "ETA can announce its disappearance, but its crimes or the action of the judiciary won't disappear."

"We don't owe them anything and we have nothing to thank them for."

While an overwhelming majority of Basques welcome the end of violence, many still want independence.

The separatist coalition EH Bildu, the second largest grouping in the regional parliament, won 21 percent of the votes in the 2016 regional elections.

The party has long called for the roughly 300 ETA prisoners held across Spain and France to be transferred to jails closer to the Basque region and their families.

"It responds to a demand of the majority of Basque society," he said in an interview published earlier on Thursday in Spanish newspaper El Pais.

"ETA never should have existed. It puts an end to a dark chapter of 60 years," he added.

Apart from ETA victims, there were also separatists killed by far-right groups and death squads backed by members of Spain's security forces in what has become known as a "dirty war" campaign.

According to a December report commissioned by the Basque regional government, more than 4,100 complaints of police torture were made between 1960 and 2014.

Those victims are also demanding they be acknowledged.

"If you don't recognize part of the suffering, it's very difficult to create conditions for... reconciliation," said Ane Muguruza, 28.

Her father Josu, a lawmaker for Herri Batasuna, ETA's political wing, was murdered in 1989 by far-right militants she believes were state-backed.

"It's very difficult when there are open wounds," she said.

"To close them, you have to clean and cure them. And for that to happen, there must be acknowledgment, it's crucial."

ETA, which stands for "Basque Homeland and Freedom" in the Basque language, carried out bombings, shootings and kidnappings, most of them after Spain transitioned to democracy in the late '70s.