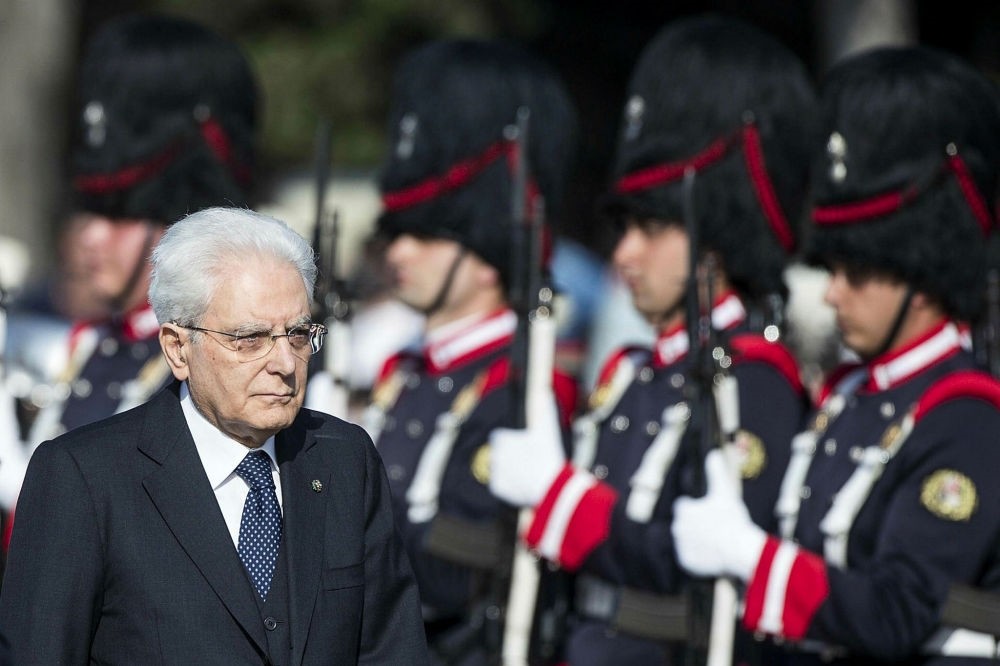 Italian President Sergio Mattarella favors a new government, rather than another election campaign, in order to end the two-month political stalemate.
by Compiled from Wire Services May 03, 2018 12:00 am

Amid calls for snap elections to end deadlock, Italian President Mattarella has ruled out the possibility of early elections in June, preferring instead to have a new government

Italian President Sergio Mattarella has ruled out the possibility of early elections in June, preferring instead to have a new government in place to pass the 2019 budget, a presidential palace source said yesterday.

Italian politics have been in limbo since an inconclusive vote on March 4, which saw a center-right alliance led by the anti-immigrant League win the most seats and the Five Star Movement (M5S) emerge as the biggest single party. The center-left Democratic Party (PD) suffered a historic defeat and came a distant third.

So far, four rounds of consultations, two by the president and two by parliamentary leaders, have failed to gather consensus for a new government. The budget must be presented to parliament in October and passed by the end of the year. On Monday, the leader of the anti-establishment 5-Star Movement called for fresh elections next month, saying efforts to form a coalition government after the March inconclusive vote had failed. Only a new vote can break the post-election stalemate that has ensnared Italy for almost two months, the leader of the anti-establishment M5S said.

"For me there is no other solution: We need to vote again as soon as possible," Luigi Di Maio said on Facebook, giving up coalition hopes with the far-right League or the center-left PD, as reported by DPA. He invited League leader Matteo Salvini to join him in urging President Sergio Mattarella to dissolve parliament immediately, allowing for new elections in June.

But the move was pre-empted late on Sunday by ex-premier Matteo Renzi, who gave his first television interview since quitting as PD leader following last month's election rout. "We can meet [with the M5S], for sure. But we cannot vote for their government," Renzi told RAI state television, insisting that it was best for the PD to move to the opposition.

Renzi's return angered his peers. Acting PD leader Maurizio Martina it was "impossible to lead" while his predecessor was still trying to call the shots, and called for a "frank and unequivocal discussion" on the party's future on Thursday.

The "no" from Renzi left Di Maio with few options, as he previously burnt bridges with Salvini over the League's reluctance to part ways from ally Silvio Berlusconi.

Berlusconi's Forza Italia is part of Salvini's bloc. The M5S wanted to cut out the ex-premier from any coalition deal with the League due to his scandal-filled career, including a tax fraud conviction.

Di Maio's wish for June elections seems unrealistic, since it takes at least two months to organize a new vote, and by convention Italian elections never take place in the warm months of July or August.

Earlier this month, a frustrated Mattarella said Italy needed a new government, rather than another election campaign, to face an important late June European Union summit on migration, banking and budget issues.

Amid the stalemate, Salvini was galvanized by a landslide conservative victory in Sunday elections in Friuli-Venezia Giulia, a north-eastern region. League candidate Massimiliano Fedriga was elected with 57 per cent of votes, results showed Monday, against 27 per cent for Sergio Bolzonello of the outgoing PD administration. "Thank you Friuli Venezia Giulia!!! #letsgoandgovern, I'm ready!," Salvini commented on Facebook, mocking the PD and the M5S for their poor showings.