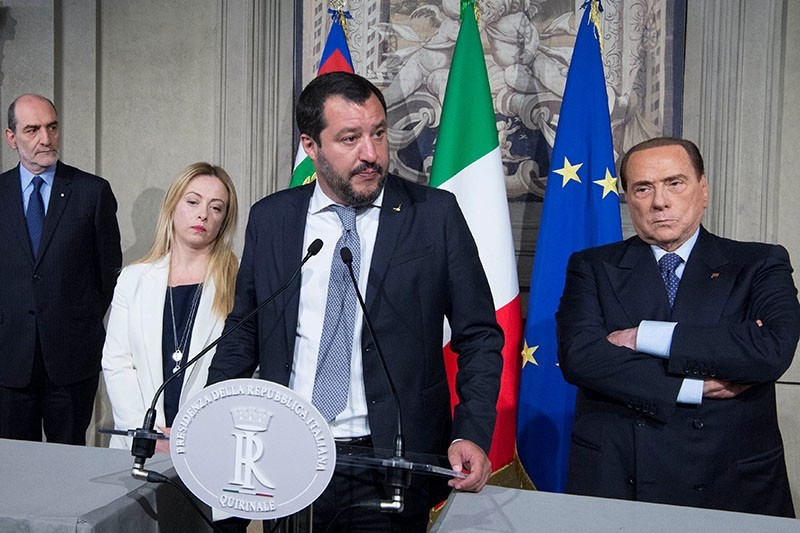 League's Matteo Salvini (C) speaks next to Fratelli d'Italia's Giorgia Meloni (L) and Forza Italia's Silvio Berlusconi following a talk with President Sergio Mattarella at the Quirinale Palace in Rome, Italy, May 7, 2018. (Reuters Photo)
by Compiled from Wire Services May 07, 2018 12:00 am

Italian politics has been deadlocked since the March 4 general election resulted in parliament being occupied by three minority blocs, unable or unwilling to work together.

Mattarella called separate meetings with rival political leaders at his Quirinale palace, in what was seen as a last-ditch effort to get them to agree on a government coalition.

A right-wing coalition led by the far-right League party topped the March 4 polls with 37 percent of the vote, while the anti-establishment Five Star Movement (M5S) became Italy's largest single party with almost 33 percent. The center-left Democratic Party came a distant third, with less than 19 percent. Neither group has the numbers to form a majority government and both have been tussling for power since the election.

Over the weekend the M5S leader, Luigi Di Maio and League chief Matteo Salvini seemed to have made some progress but after a new round of consultations with the president Monday, deadlock appeared insurmountable.

Speaking after his meeting with Mattarella, Di Maio said he was willing to forgo the premiership in order to come to an accord with the League.

"I am prepared to choose a different prime minister who would forge a government contract (with the League)," he said.

The far-right League and the anti-establishment Five Star Movement (M5S) agree that Italy should hold new elections on July 8. League leader Matteo Salvini suggested the date after meeting with M5S leader Luigi Di Maio. When journalists asked him whether Di Maio was also in favour of a July 8 vote, Salvini said "yes."

But for any potential deal to work, Di Maio insists that Salvini's coalition partner, former premier Silvio Berlusconi and his Forza Italia party must play no role in the new government, limiting themselves to outside support only.

Salvini said he was confident he could win over the missing votes - some 50 in the 630-member lower assembly, and 21 in the 320-member Senate - but did not say how.

The M5S regards Berlusconi's party as the symbol of Italy's political corruption.

Di Maio also stated that his party would refuse to back a caretaker government and that if no majority emerged the country must "return to the polls," a stance he shares with League leader Salvini.

Following his meeting with the president, Salvini also declared that he was ready to "participate in a new government which would start to solve the country's problems."

But he remained firm in his refusal to break up his coalition and ditch Berlusconi.

Instead he proposed he be given a mandate to form a minority government which would need the support of a few dozen MPs from smaller parties in parliament.

Press reports suggest Mattarella would be unlikely to do so without guarantees a majority could be reached.

The President is expected to name a caretaker government, similar to that of economist Mario Monti from 2011 to 2013, that would be tasked with restoring Italy's role on the world stage and running the country at least until the 2019 budget is passed.

He is thought to be looking for a neutral but competent figure, perhaps a woman, with press speculation running wild.

Several academics have been touted for the job by the media, including female candidates like economist Lucrezia Reichlin and constitutional court judge Marta Cartabia.

Italy has never had a female prime minister.

A "government of the president" would likely be tasked with drafting next year's budget law and help parliament draft a new election law to minimize chances of a deadlock after the next elections.

It would also have to engage in sensitive negotiations with European Union partners on migration, eurozone reforms and budget issues - all of the agenda of a Brussels summit in late June.

But with M5S and the League staunchly opposed to the idea, putting together a caretaker government will be no easy feat.

Pollster Lorenzo Pregliasco said voter surveys suggested new elections would not change the balance of forces. "No one will win a majority."