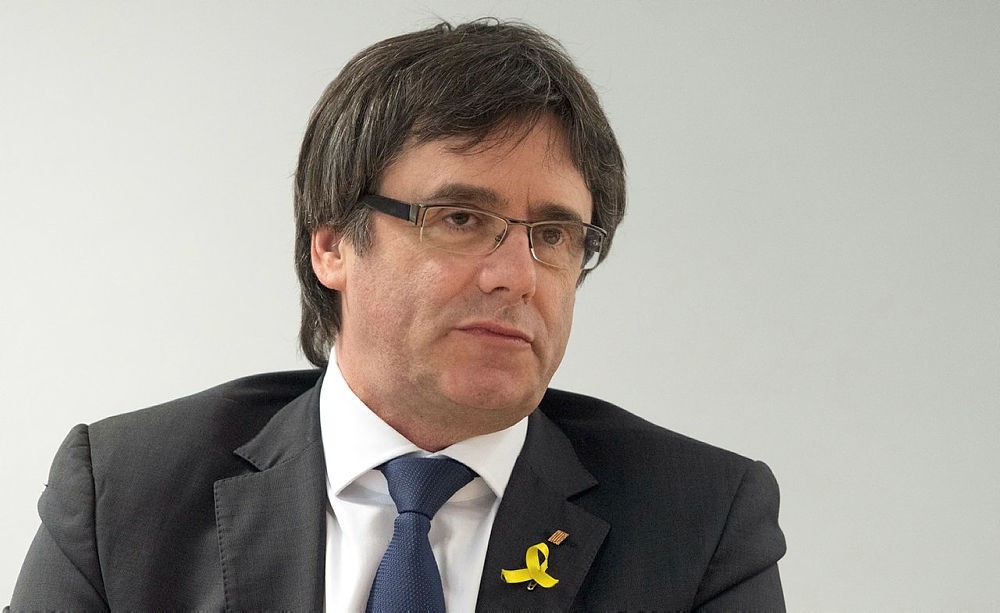 Former Catalan leader, Carles Puigdemont, attends a a meeting with members of the Junts per Catalunya party, in a hotel in Berlin, Saturday, April 5, 2018. (dpa via AP)
by Associated Press May 09, 2018 12:00 am

Plans by Catalan separatists to re-elect their region's former president in absentia were blocked Wednesday by Spain's Constitutional Court.

The court agreed to consider the Spanish government's challenge of a legal change approved by Catalonia's separatist-dominated parliament that paved the way for Carles Puigdemont's election while he fights extradition from Germany to Spain.

By accepting the case, the court effectively ended Puigdemont's chances of being re-elected to the post the Spanish government removed him from in October. A ruling will take months, but pro-independence parties in Catalonia need to elect a new chief by May 22 or risk the calling of a new election.

The government said its appeal also aims to ban regional Catalan cabinet meetings held via videoconference and with participants who might be outside Spain.

Separatist parties have said in recent days that they have time to come up with another candidate before the deadline.

Failure to form a new government could be disastrous for the pro-independence parties. So far, they have blamed central authorities in Madrid or judges for their frustrated efforts to elect a president while considering candidates who were either in jail or facing charges linked to the independence bid.

A Catalonia without an effective leader would also mean that the region's control would continue in the hands of Prime Minister Mariano Rajoy's conservative government.

The central Cabinet in Madrid has been managing Catalan public affairs since shortly after separatist politicians made an independence declaration six months ago based on the results of an outlawed referendum on secession.

A regional election called by Rajoy to overcome the crisis at the end of 2017 gave a narrow majority to Catalan separatist lawmakers.

In a separate development, a Spanish Supreme Court Judge on Wednesday upheld Puigdemont's indictment on rebellion and misuse of public funds, the two charges for which Spain wants the former politician to be extradited from Germany.

Puigdemont was arrested on March 25 in northern Germany and is currently on bail in Berlin. The regional German court in charge of his case decided that the charge of rebellion did not warrant extradition because the accusation isn't punishable under German law.

Puigdemont can still be extradited on the less serious charge of misuse of funds, an allegation connected to the banned independence referendum his government sanctioned and oversaw last year.

In Wednesday's ruling, Spanish Judge Pablo Llarena also rejected the appeals of 22 other former Catalan cabinet members, lawmakers and activists who were indicted in March.