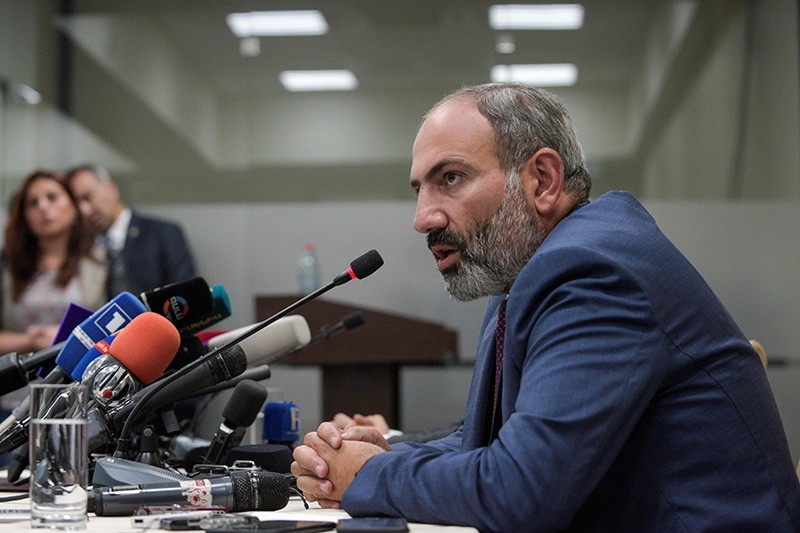 Armenian Prime Minister Nikol Pashinian gives a news conference on May 9, 2018, in Stepanakert, the capital of Azerbaijan's breakaway Nagorny Karabakh region. (AFP Photo)
by May 10, 2018 12:00 am

New Armenian Prime Minister Nikol Pashinian, who was swept to power this week on the back of popular protests, said Thursday he had sacked the heads of the country's police and security service.

The country's defense and finance ministers earlier said they would not serve in a new government, which has to be formed within a fortnight of the prime minister's election.

"I've just signed a statement to the president about relieving the police chief Vladimir Gasparyan and security service head Georgi Kutoyan of their duties," the politician wrote on his Facebook page.

Yerevan's deputy police chief Valeri Osipyan, who took part in negotiations with the organizers of the recent street protests, was nominated to lead the country's police force.

Pashinian underlined the symbolism of the appointment.

"During the demonstrations, we were on a different side of the barricade from Valeri Osipyan. I decided... that we will be on the same side," he wrote.

Artur Vanetsyan, who is currently head of the security services in the Armenian capital, was appointed to the national role.

"The National Security Service must perform a serious function in the fight against corruption, which we must wipe out very quickly from Armenia," the prime minister said as he announced the personnel change.

Armenia's parliament elected Pashinian this week after he spearheaded weeks of mass protests against the ruling party, transforming the country's political landscape.

Critics accused longtime leader Serzh Sarkisian and his Republican party of corruption, being under the influence of powerful oligarchs and of failing to tackle widespread poverty.

The hugely popular Pashinian had in recent weeks piled pressure on the Republicans through an unprecedented campaign of civil disobedience, leading to Sarkisian's shock resignation, a week after he shifted to the newly-empowered role of prime minister after serving for 10 years as president.

Pashinian said ahead of the vote that he would work to eradicate corruption and ensure "a normal life in the country."