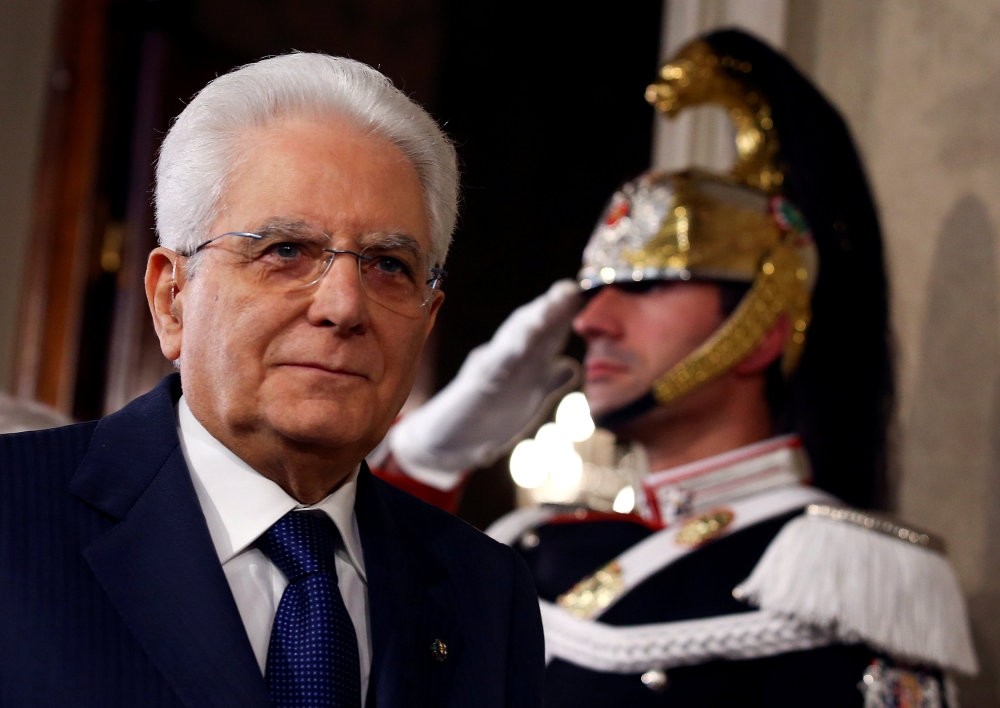 Italian President Sergio Mattarella at Quirinal Palace, Rome, April 5.
by Compiled from Wire Services May 11, 2018 12:00 am

The anti-establishment 5-Star Movement and far-right League have made "significant steps" toward forming a government, the two parties said yesterday as Italy looked to end nine weeks of political deadlock.

The two groups, which are hostile to European Union budget restrictions and have made electoral pledges that would cost billions of euros to implement, entered into negotiations on Wednesday just as a swift return to the polls looked inevitable.

5-Star draws much of its support in the impoverished south while the League's electoral base is the wealthy north. While 5-Star wants to introduce generous welfare benefits, the League wants to slash taxes.

"Significant steps forward have been made on the composition of the government and on the [nomination] of a prime minister," a joint statement said following a meeting between League leader Matteo Salvini and 5-Star chief Luigi Di Maio, as reported by Reuters.

They gave no indication of who might lead the administration or who could take charge of the key ministries.

"I cannot disguise my joy and happiness that we can finally start solving Italy's problems," Di Maio told supporters on Facebook. He said he should have more details later in the day.

In a sign of progress on Wednesday, Salvini's right-wing coalition partner, former Prime Minister Silvio Berlusconi, gave the green light for the pair to form a government without his Forza Italia party.

Salvini and Berlusconi's coalition won the most seats in the March election, but the 81-year-old ex-premier has been a sticking point in the ensuing horse-trading.

Di Maio insisted Salvini dump the scandal-dogged media mogul Berlusconi and form a government with the M5S and without Forza Italia.

Late Wednesday Berlusconi announced he would not block a possible coalition deal between the two parties. Between them they would have enough seats in both houses of parliament to form a majority.

After three failed rounds of consultations hosted by President Sergio Mattarella, Italy had looked to be heading either for a caretaker government, chosen by the president, or fresh elections.

Both the League and 5-Star are staunchly opposed to a caretaker government and without their support the initiative would not pass a confidence vote in parliament.

The alternative could be fresh elections as early as July. News agency AGI said Di Maio and Salvini were aiming to indicate their choice for prime minister to President Sergio Mattarella by Friday.

Talks over policies will likely take longer given the serious differences between the two parties, in particular regarding the 5-Star's flagship universal basic income policy.

"We still have to work on the program, on dates, on the team and the things that need doing," Salvini said, Agence France-Presse (AFP) reported. "Either we reach a conclusion, or we return to the voters."