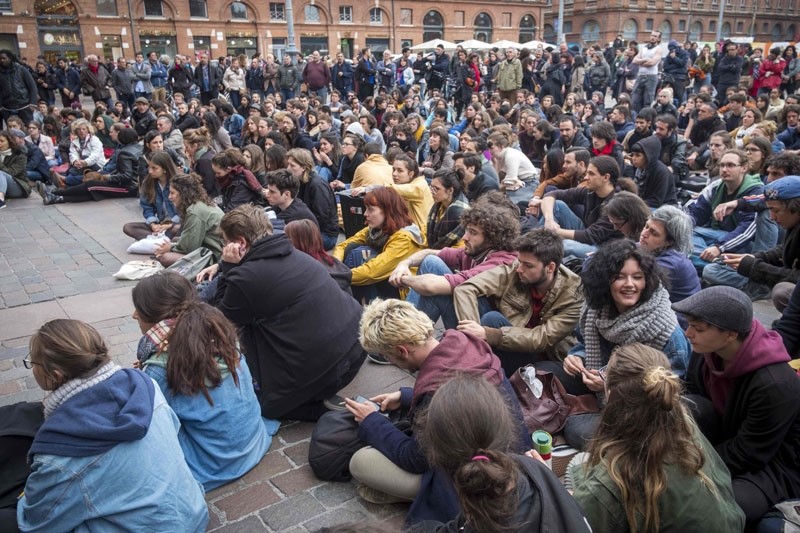 Police have fired tear gas on students blocking an exam site south of Paris, amid ongoing protests over changes to France's public university system. The protest Friday in the Paris suburb of Arcueil is part of weeks of protests and strikes over reforms by President Emmanuel Macron's government. Student unions are angry at a move that they fear will make universities more selective.

Scores of protesters converged on Friday's exam site and formed a human chain to prevent students from entering. Riot police moved in, but university authorities delayed the exams because of the tensions. For the far-left students who dominated the sit-ins for the last couple of days, the protests are about much more than education, they have echoes of the momentous French university sit-ins that spurred a social revolution exactly 50 years ago, in May 1968. Protests blocked 700 students from sitting in an exam in Strasbourg last week, and in Nancy police had to intervene to allow students to get in to an English test.

Meanwhile French trains were disrupted Friday as part of rolling strikes over the end to some worker benefits at national rail authority SNCF. The indebted company offered discounts to users to try to save its reputation.

Macron's presidency has been challenged on multiple fronts, as a joint show of force by anti-Macron groups including students and labor unions sought to broaden resistance to hard-hitting reforms. However, the centrist president has repeatedly said he won't cave in under pressure, arguing that he was elected president last year to reform the country. Pressure has been mounting on Macron nearly a year since the 40-year-old centrist swept to power, with a survey by Ifop-Fiducial released last month, suggesting that 58 percent of voters were unhappy with his presidency.

At present, anyone with a French high school diploma can go on to study any course they like at a public university. With tuition paid almost entirely by the state, the average student paid 189 euros ($225) last year, the system's proponents hold it up as a beacon of egalitarianism. Yet Macron and other reformists say the policy has brought France's higher education system to a breaking point. Almost all students take their high school exams now, and almost 80 percent pass, a figure that has risen steadily, and exponentially, since the 1950s.

As a consequence, universities are badly overstretched. First-year lectures are crammed and students complain of nonexistent support. Opponents argue that France wastes millions of euros in taxpayer money each year by letting students attempt degrees in subjects they're not very good at, contributing to high dropout rates and frequent repeats after failed exams. Some 60 percent fail to finish their degree within four years.

To help ease these problems, Macron wants universities to be allowed to set admissions criteria for oversubscribed courses and, for weaker students, make offers conditional on them taking catch-up classes. But academic selection, even in this limited form, remains hugely politically sensitive in France, half a century after it became one of the driving issues behind the May '68 protests.