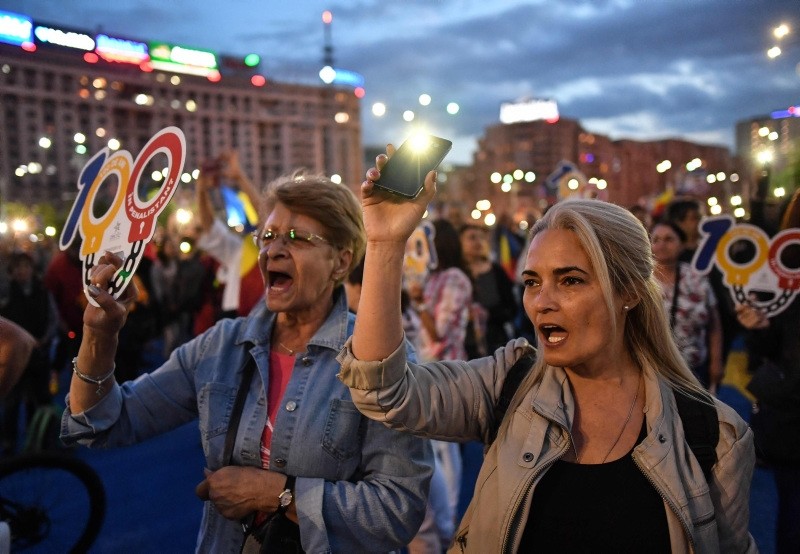 People use the light of their mobile phones and hold placards during a protest asking for the resignation of the Romanian Prime minister on May 12, 2018 in front of the government headquarters in Bucharest. (AFP Photo)
by Associated Press May 12, 2018 12:00 am

Thousands of people gathered Saturday in Romania's capital and other cities to protest a contentious judicial overhaul they say will make it harder to prosecute senior officials for graft.

Romanians of all ages assembled in Bucharest's Victory Square on for the protest held under a motto of "We want Europe, not a dictatorship!"

They blew whistles, waved Romanian flags and yelled "Resign!" Police ringed part of the square and placed traffic restrictions in the area.

There were smaller protests in the cities of Cluj, Timisoara, Iasi, Craiova, Brasov and elsewhere.

Anti-corruption demonstrations have been held regularly in Romania since the current left-wing government came to power in 2016 and starting pursuing legal changes that critics fear will weaken the fight against corruption.

"This government is dragging us away from Europe," Gabriel Vasilache, a 35-year-old manager attending Saturday's demonstration, said. "We are here for our future and our children's future."

President Klaus Iohannis, a political opponent of the ruling Social Democratic Party, accused the government Saturday of undermining the independence "of institutions, the rule of law" that he said "have been jeopardized in the last year by so-called reforms."

One measure proposed by the government would restrict public statements about corruption probes. Another would allow suspects in official misconduct cases to be present when whistleblowers make allegations.

The government says that laws need to be reformed and prosecutors currently have too much power.

Marinel Velicu, 75, a retired IT programmer, said he was demonstrating "so we have an independent justice system and our country is not run by thieves and people with convictions."