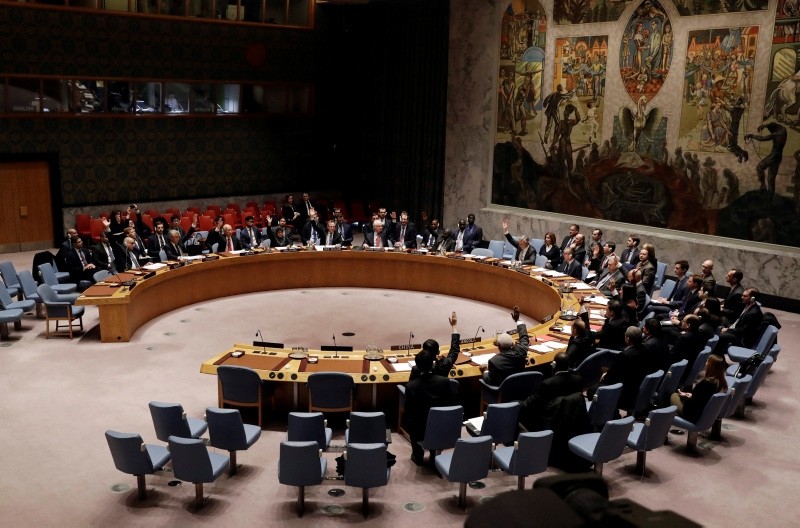 United Nations Security Council Members vote on a ceasefire in Syria at UN headquarters in New York, New York, December 31, 2016. (EPA Photo)
by Compiled from Wire Services May 14, 2018 12:00 am

Kuwait has requested an emergency meeting of the U.N. Security Council on Tuesday, after dozens of Palestinian protesters were killed in violent clashes with Israeli forces on the Gaza border, the country's mission to the UN said Monday.

"We condemned what has happened," the Kuwaiti ambassador to the United Nations, Mansour al-Otaibi, told journalists. Kuwait is a non-permanent council member.

Meanwhile Israel says it has the right to defend its border.

The call came after the death toll in Gaza from Israeli live fire reached 52 on Monday, the highest level in a single day since a series of such protests demanding the right to return to ancestral homes in Israel began on March 30.

The violence erupted over the formal opening of the controversial U.S. embassy in Jerusalem. It was the bloodiest day in the Israeli-Palestinian conflict since a 2014 Gaza war.

Trump sparked international outcry last December when he unilaterally recognized Jerusalem as Israel's capital and vowed to relocate Washington's embassy to the city.

Thousands of Palestinians had gathered on Gaza Strip's eastern border early Monday morning to take part in protests aimed to commemorate the Nakba anniversary and protest relocating the U.S. Embassy from Tel Aviv to Jerusalem.

Amid the mounting casualty toll, the U.N. urged Israeli security forces to "exercise maximum restraint in the use of live fire".

"The Secretary-General is profoundly alarmed by the sharp escalation of violence in the occupied Palestinian territory and the high number of Palestinians killed and injured in the Gaza protests," spokesman Farhan Haq said in a statement, referring to Antonio Guterres.

"With tensions high and more demonstrations expected in the coming days, it is imperative that everyone show the utmost restraint to avoid further loss of life, including ensuring that all civilians and particularly children are not put in harm's way," Haq added.

The U.N.'s international public health agency voiced shock and sadness over the killing of a health worker during Monday's protests.

The World Health Organization (WHO) counted 211 attacks on health workers during the "Great Return" marches. They include nine bullet wounds, 13 injuries by tear gas canisters, and 189 instances of health workers suffering from tear gas inhalation.

A further 25 ambulances were damaged, according to the WHO. Its tally ran through May 13, and did not include any additional casualties during Monday's protests. The WHO did not identify the health worker killed Monday.

"Health workers and health facilities should be protected at all times. There are clear obligations to safeguard health care under international law and these have to be respected," said Gerald Rockenschaub, head of the WHO office in the occupied Palestinian territory.

Since the Great Return rallies began on March 30, at least 49 Palestinian demonstrators have been killed and hundreds injured, according to Palestinian Health Ministry figures.