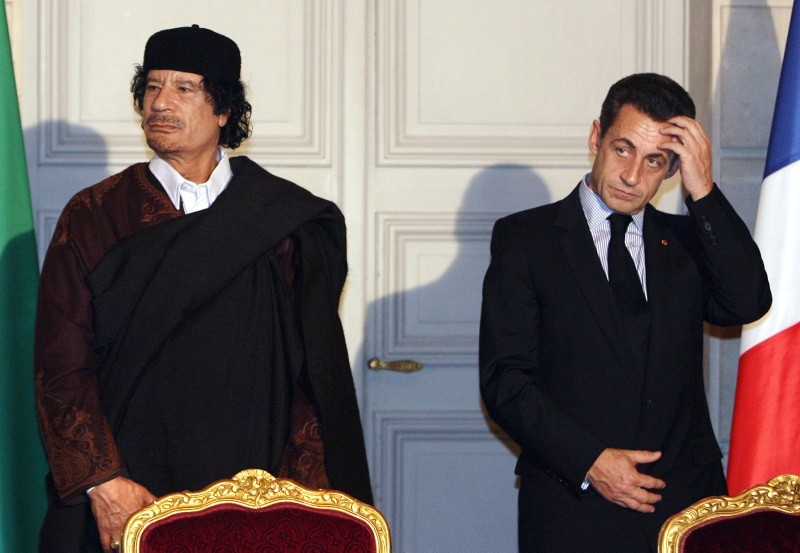 In this file photograph taken on Dec.10, 2007, then French President Nicolas Sarkozy (R) and Libyan leader Moamer Kadhafi pose during the signature of 10 billion euros of trade contracts between the two countries in Paris. (AFP Photo)
by May 16, 2018 12:00 am

The Paris appeals court announced Wednesday it will rule in September on whether former French leader Nicolas Sarkozy should stand trial on charges of illicit financing of his failed 2012 presidential campaign, one of several legal inquiries which have dogged the right-wing politician since he left office.

The court made the announcement after hearing lengthy arguments from Sarkozy's legal team seeking to avoid a potentially embarrassing public ordeal as well as up to a year in prison if convicted.

The appeals court said it will decide on September 20 whether to uphold the decision of a judge last year ordering the trial.

Sarkozy has angrily denounced the charges, saying he was unaware of the fraud by executives at public relations firm Bygmalion, who are also facing trial alongside accountants and former UMP officials.

His defense team is also arguing on procedural grounds, saying Sarkozy has already been sanctioned for campaign overspending by France's Constitutional Council in 2013.

But that ruling involved just 364,000 euros of overspending, and came before the revelations of the "Bygmalion affair" and fake billings.

If the judges do eventually decide this argument is valid, the matter could be sent to the Cour de Cassation, France's court of final appeal, which would delay any decision on whether a trial will be held.

Bygmalion executives as well as Jerome Lavrilleux, the deputy manager of Sarkozy's 2012 campaign, have acknowledged the existence of fraud and false accounting.

Sarkozy, 63, was president from 2007 until his defeat by Socialist rival Francois Hollande in 2012.

The rightwinger has been fighting legal problems on several fronts.

He is charged with corruption and influence peddling for allegedly offering to help a judge obtain a plum retirement job in return from secret information about another case.

That inquiry gave him the dubious distinction in 2014 of being the first former French president to be taken into police custody.

He has also been charged over accusations by former members of Moamer Kadhafi's regime that he accepted millions of the slain Libyan dictator's cash for his first presidential campaign in 2007 -- claims Sarkozy has vehemently denied.

He attempted a comeback last year, taking the helm of the Republicans party and hoping to be its presidential candidate, only to lose out to his former prime minister Francois Fillon.

In March Sarkozy said he was "finished" with politics after being grilled by investigators for two days over the Kadhafi charges, though he vowed to clear his name and "restore my honor."