Crimean Tatars mark 74th anniversary of deportation as 25,000 driven out of Crimea since 2014 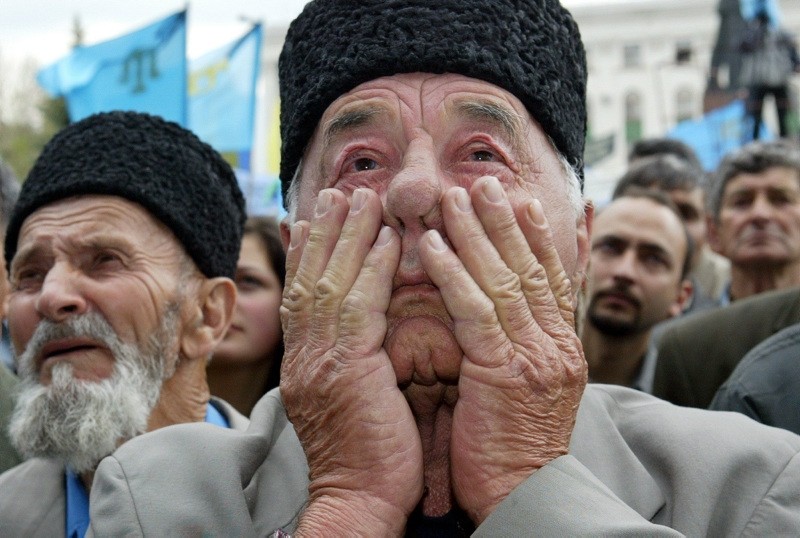 This May 18, 2004 file photo shows a Crimean Tatar man attending a mass rally held on the 60th anniversary of the deportation of the Crimean Tatar people from Crimea. (AFP Photo)
by Adil-Girey Ablyatifov May 18, 2018 12:00 am

May 18 marks a tragic dark day for Crimean Tatars, the indigenous people of Crimea – a peninsula on the Black Sea coast that became known to most of the world after Russia illegally annexed it from Ukraine in 2014.

On the dawn of that day 74 years ago, the Stalin-ruled Soviet Union deported every single Crimean Tatar from the peninsula, accusing the entire nation of collaborating with Nazis. During the act, recognized by Ukraine as genocide, up to 46 percent of the population died during transportation and in places of exile in Central Asia.

Usually presented as a collective punishment, the deportation is also linked to the Turkish Straits crisis between the USSR and Turkey after World War II. Following the war, Moscow planned to pressure Ankara into granting it free pass through the Dardanelles and Bosporus. If a conflict were to arise with Turkey in the Black Sea, Crimean Tatars, who have ethnic ties to Turks and share common history with them from the Ottoman Empire, would pose a threat as an internal enemy.

As the Soviet Union collapsed at the end the 20th century, Crimean Tatars started returning to their homeland. Ever since then, the people have commemorated the victims of the deportation with mass rallies and prayers.

The 70th anniversary of the nation's tragedy, however, was marked under the Russian occupation of Crimea —strongly opposed by the Crimean Tatars who almost entirely remained loyal to Ukraine.

Although not that great in numbers – currently there are some 300,000 Crimean Tatars in Crimea which make up roughly 13 percent of the peninsula's total population of 2 million – the nation's cohesion on most matters makes it a formidable political force.

Since the Russian annexation, the United Nations, numerous international rights watchdogs and activists have documented increasing persecution of Crimean Tatars over their alignment with Ukraine, including frequent searches at their homes and businesses, detentions and interrogations. The Crimean Tatar Mejlis – the nation's single highest executive-representative body – was banned by Russia as an extremist organization and its leaders barred from entering the country.

As a result, 20,000-25,000 Crimean Tatars have had to flee Crimea since 2014, chairman of the Mejlis Refat Chubarov said in a video address to the participants of a rally commemorating the victims of the deportation in Ankara on May 13.

Speaking at the 37th session of the U.N.'s Human Rights Council in February 2018, Turkey's ambassador to the U.N. Naci Koru urged to immediately address the reported human right abuses against Crimean Tatars and voiced support for their peaceful efforts to reclaim their rights.

Even though more than seven decades have passed since the tragic events of 1944, the Crimean Tatars face a similar situation with a significant part of its population driven out of their historic homeland in an era when land conquests seemed a distant past.