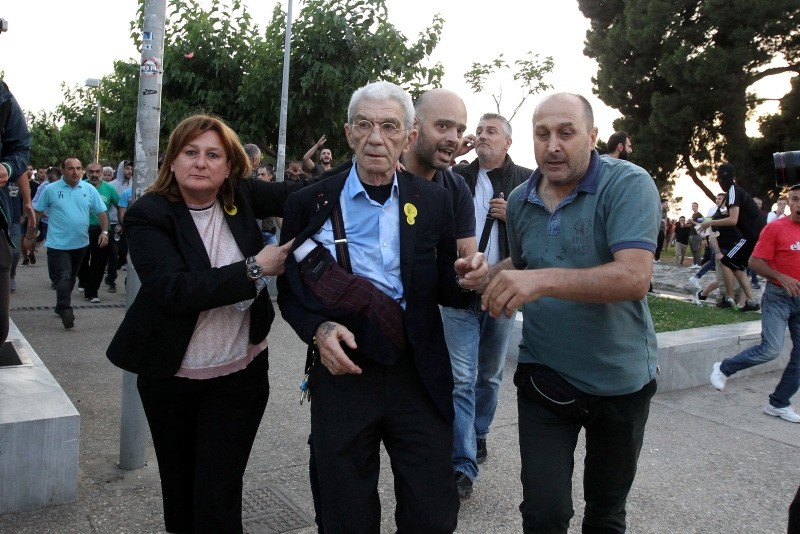 Mayor of Thessaloniki, Yiannis Boutaris (C), 75-years-old, is aided after being attacked by a mob of far-right during Remembrance Day in the city of Thessaloniki, northern Greece, May 19, 2018. (EPA Photo)
by Compiled from Wire Services May 20, 2018 12:00 am

Police in Greece's second-largest city say they have arrested two people as suspects in an attack that left the mayor of Thessaloniki hospitalized.

Mayor Yiannis Boutaris of Greece's second-largest city was hospitalized Saturday with head, back and leg injuries after being set upon by nationalist extremists.

Thessaloniki City Council President Calypso Goula said Boutaris was attending a flag-lowering ceremony Saturday in commemoration of the so-called "Pontic Genocide," the killing of ethnic Greeks by the Turks in the Black Sea region during World War I and the subsequent Greek-Turkish War.

Police say one of the detained suspects is a 36 year old, the other age 20. They are looking for more suspects.

Goula, who also was there, says about a dozen people approached the 75-year-old Boutaris and told him to leave the event, then attacked him with bottles. The mayor is known for his strong anti-nationalist stance.

Goula says Boutaris fell down and was kicked in the head and legs.

"They were hitting me everywhere. Kicks, punches, the lot," Boutaris told state agency ANA Sunday. "It was a despicable attack, but I am well."

Footage from the event shows Boutaris initially being heckled. As he starts to leave, people start throwing objects at him and he falls to the ground.

Some of the attackers tried to break the windows of his car as it sped off.

75-year-old Yannis Boutaris, the mayor Greece's second largest city Thessaloniki, has been attacked, beaten up during a rally in the latest attack by far-right extremistshttps://t.co/h07Q6neVPN pic.twitter.com/kdeiijYMw7

The office of Prime Minister Alexis Tsipras said the attackers were "far-right thugs."

A maverick politician, Boutaris has repeatedly angered hardliners in Greece with controversial statements on Macedonia, Turkey and Israel.

Among them is calling Mustafa Kemal Atatürk, founder of the modern Republic of Turkey and a hate figure in Greece, a "great leader." Atatürk is a native of Thessaloniki, which was one of the largest cities in the Balkans during the 500-year-long Ottoman rule.

He also angered nationalists for calling the Republic of Macedonia, which has a name dispute with Greece, simply as Macedonia, which is also a region in northern Greece with Thessaloniki as its capital.

Since collapse of the economy in the 2008 global crisis, the far-left and the far-right has been on the rise in Greece as a response to centrist and pro-European parties which were mainly held responsible. While the left-wing SYRIZA became the governing party with 36.3 percent of the votes in in the latest elections in September 2015, neo-Nazi, Eurosceptic and Islamophobic Golden Dawn becoming the third largest party with 7 percent of the votes, although trailing far behind runner-up center-right New Democracy at 27.8 percent.

A massive influx of refugees from Syria and other West Asian countries into Greece across the Aegean starting from 2015 also served well for the Greek far-right, even in the Aegean Islands that traditionally vote for the left. Far-right groups began anti-migration protests in mainland Greece, joining in protests by locals in the islands overwhelmed by the influx and staging attacks on refugee centers.

While Greeks claim that the massacres in Aegean and Black Sea regions (Pontus in Greek) between 1914 and 1922 amounted to a genocide, Turks say that it was inter-ethnic conflict that mainly began with the expulsion of Turks and Muslims from the Balkans at late as 1912. Armed Greek militia was formed when the Russian Empire invaded eastern half of the Black Sea region during World War I, only to retreat with the communist revolution in 1917. Starting from 1916, Greece sided with the Allied powers and officially declared war against Central Powers (including Ottoman Empire) in late 1917.

Following their defeat, Greece invaded western Anatolia up to the outskirts of Ankara, receiving significant support from the local Greek population. Whereas in the north, Greek militia was being supplied by the Allied and Greek navies through the Black Sea, posing a grave threat to the Turkish nationalist government in Ankara and to supply routes with their new Bolshevik allies north of the Black Sea. Until the establishment of the regular Turkish army in 1921, which mainly fought the invading Greek armies in the western front, the Ankara government responded the Greek militia groups in the Black Sea by its own militia groups to secure the region. With the defeat of the Greek army in 1922, the two countries signed a population exchange deal, which included some 300,000 Pontic Greeks and end the Greek presence on southern coast of the Black Sea.