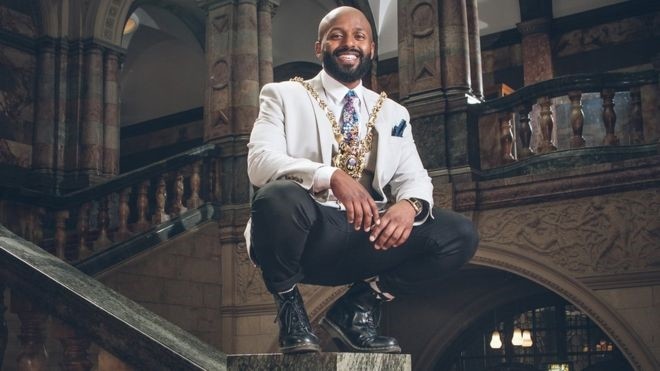 A 28-year-old Muslim former refugee broke the glass ceiling by becoming the first Somali-British Lord Mayor of Sheffield in the United Kingdom, and also its youngest ever.

Magid Magid, who was born in Somalia and moved to Sheffield with his family at five years old after staying in a refugee camp in Ethiopia for six months, is also the first Green Party councilor to ever hold the office.

Magid's success and his inaugural portrait as mayor at the town hall quickly became viral on social media, with the young mayor gaining hundreds of fans around the world for his unique style and promise to bring a modern twist to the office.

Already a huge fan of Sheffield's new Lord Mayor, @MagicMagid. I hope young people, especially #refugees, see Magid's journey and realise they can be anything they aspire to be. pic.twitter.com/Dh0J7Cudka

Loving the style and confidence from the newly attested Mayor of Sheffield, UK pic.twitter.com/a10QjK9xgu


"Me and my family moved to Sheffield from Somalia when I was five years old to look for a better life and it was this great city I call home that welcomed me and many others like me. But I am not arrogant enough to think that I made it here all by myself," Magid said in a statement.

Magid studied marine biology at the University of Hull, where he first entered politics. He was elected as Green councilor for Broomhill and Sharrow Vale ward in Sheffield in 2016.