Immigration minister's views on fasting Muslims are her own, Danish gov't says 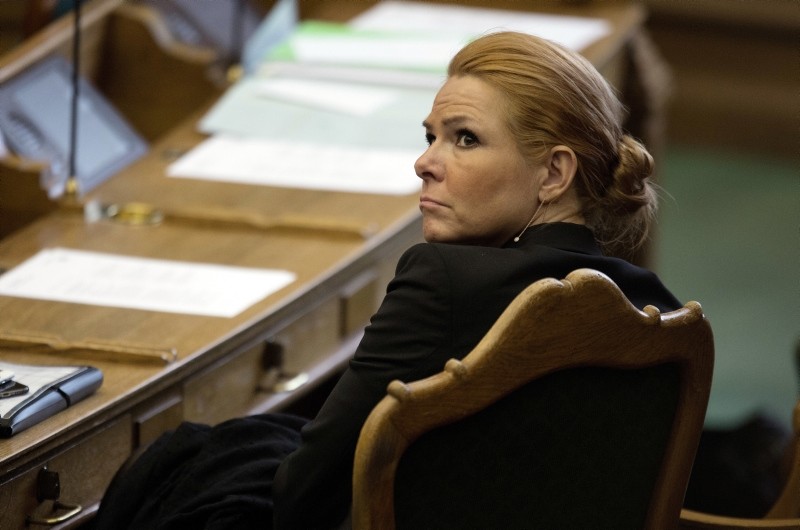 In this Tuesday Jan. 26, 2016 file photo, Denmark's Minister of Integration from the Liberal Party Inger Stoejberg sits in Parliament, in Copenhagen. (AP Photo)
by Associated Press May 22, 2018 12:00 am

Assertions by Denmark's immigration minister that Muslims fasting for Ramadan pose a safety hazard in some jobs do not represent the views of the country's government, a spokeswoman for the ruling coalition said Tuesday.

Karen Ellemann, chief whip of the Liberal Party, said Tuesday after an ordinary party meeting that Stoejberg's remarks were not a formal proposal to change the law. Ellemann added that fellow party member Stoejberg "had the right to start this debate."

Others within the party distanced themselves from the minister's comments. Senior Liberal Party member Jacob Jensen wrote on Facebook that "maybe we politicians should focus on finding solutions to the real problems first."

"I don't agree with Inger Stoejberg," Jensen said, adding that politicians should not interfere with employers' internal affairs.

In her blog for tabloid BT, Stoejberg questioned how "commanding observance to a 1,400-year-old pillar of Islam" was compatible with modern labor markets. She cited bus drivers as an example of workers whose performance could be negatively affected by foregoing food and drink.

Last week, millions of Muslims around the world began observing Ramadan, a holy month of intense prayer, fasting during daylight hours and nightly feasts. Some 250,000 Muslims are estimated to live in Denmark, a country with a population of 5.7 million.

Stoejberg's remarks were met by a barrage of people saying she was wrong and lacked any basis for her claims.

Özlem Çekiç, a former lawmaker with Denmark's left-wing Socialist People's Party, said the airing of her opinions was "a sad way to start the Ramadan" and "contribute at digging deeper and deeper trenches" within the society.

"It shows that there is a huge distance between lawmakers and ordinary Danes" Hussein said Tuesday.

Arriva, Denmark's largest bus operator, has many Muslims employees among its 3,500-person workforce and said Tuesday no problems have arisen during Ramadan. The country's largest trade union, the United Federation of Danish Workers, called Stoejberg's remarks "far out," adding it had "never heard of a single case where the fasting has been a problem."

Abir Al-Kalemji, a physician in Denmark, wrote on Twitter that the government ministers exist "to solve real problems, not to invent them" and Stoejberg's remarks "exposed her intolerance to immigrants."

Stoejberg, a government member since June 2015, has spearheaded the tightening of asylum and immigration rules in recent years. Denmark adopted a law in 2016 requiring newly arrived asylum-seekers to hand over valuables such jewelry and gold to help pay for their stays in the country.

Known for provocative stunts, she caused a stir last year by publishing a screen grab of the background image on her tablet — a cartoon of the Prophet Muhammad that caused outrage among Muslims around the world in 2006.