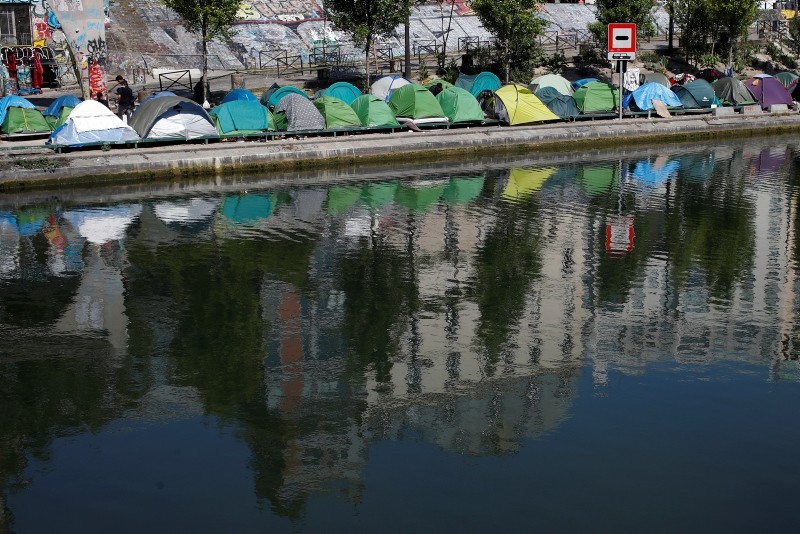 A burgeoning migrant camp in Paris, on a canal used by joggers and cyclists, is at the center of a tug-of-war over how best to respond to the unrelenting arrivals of migrants in the French capital — with humanity or with muscle.

Two migrants drowned this month in canals and others have been injured in fights, increasing the pressure to act.

France's interior minister on Wednesday ordered the evacuation of some 2,300 migrants at the camp and others around Paris. But he and Paris Mayor Anne Hidalgo remain at odds over where to take them, and how to find a lasting solution.

The debate raises a question shared across European nations seeking to manage the migrant flux, which has ebbed since the mass Syrian refugee crisis a few years ago but remains a steady challenge.

Collomb expressed "regret" at Hidalgo's refusal to clear out the migrants, and said he had no choice but to order an evacuation, expected in the coming days.

The mayor and aid groups want the migrants put in shelters, not just evacuated in a police operation and dispersed or summarily deported. Paris police have already cleared out some 28,000 migrants from Paris camps in the past three years in 35 evacuations, but the arrivals haven't slowed.

Collomb is behind the government's tough immigration bill that has rained criticism on President Emmanuel Macron, who is working to stop migration at its source and use a police approach at home. Refusing to shelter the Paris migrants exemplifies the approach.

Side-to-side and back-to-back, hundreds of small tents are packed under bridges on the side of a canal in far northeastern Paris, beside a shopping center, banks and other businesses.

The tents, filled mainly with African migrants, hold stories of horrific stays in Libya, desperate boat trips across the Mediterranean, frozen journeys on foot through the Alps — and visions of the good life that fuels the dreams of all migrants.

Joggers, cyclists and those working in the area pass in the narrow space available, as river shuttles and barges ply the canal's waters.

The surrealistic scene is repeated along the Canal Saint-Martin near Porte de la Villette area, a scenic stretch popular with tourists in the heart of Paris where an estimated 450 migrants, many Afghan, are camped.

Ile-de-France Governor Michel Cadot said earlier in May that the camp will be evacuated.

"It's not the best vision from the office window," said Kevin Sadoun, who works at a major bank with offices around the largest encampment, known as the "Millenaire" after the shopping center overlooking the tents. "We see people pee, defecate ... But they have no choice," he said.

There are few portable toilets and urinals, and just one set of spigots where migrants wash clothes.

Naby Sylla, a 20-year-old Guinean, is among migrants who crossed into France via the Alps, after traveling by raft from Sabratha, Libya, to Italy. He left Italy, he said, after being twice attacked, once with a bottle and needing hospital treatment.

"In Africa, we thought that Europe was a place of welcome. Unfortunately, we don't find that," he told The Associated Press.

Some 1,000 migrants also live in two camps in the Porte de Clignancourt area in northern Paris.