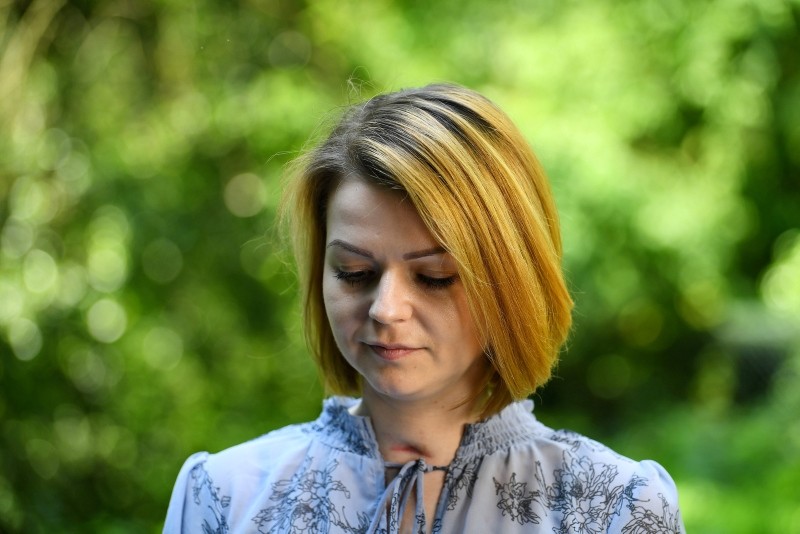 Yulia Skripal, who was poisoned in Salisbury along with her father, Russian spy Sergei Skripal, speaks to Reuters in London, Britain, May 23, 2018. (Reuters Photo)
by French Press Agency - AFP
May 23, 2018 12:00 am

Yulia Skripal, who was poisoned with her ex-spy father in Britain in March, said in a video statement Wednesday she would like to eventually return to Russia but first needed to get better.

"I was discharged from hospital on April 9th but my treatment is continuing," Yulia Skripal said in a video statement to Reuters which was broadcast on national television in Russia.

"In the future I hope to return home back to my country," said the 33-year-old woman who wore a light blue dress and a visible scar on her throat.

Yulia Skripal, who is under the protection of the British government, spoke in Russian from an undisclosed location and smiled as she began to speak.

"It's still hard for me to come to terms with the thought that we came under such an attack," she said, adding she was in a coma for 20 days.

"I woke to the news that we had both been poisoned," she said.

"The fact that a nerve agent was used to do this is shocking," she added. "We are very lucky to have survived this assassination attempt."

She said she was grateful to Russian diplomats for their help but said she "was not ready" to accept assistance from the Russian embassy at this stage.

"I don't want to go into details but I would just like to say that the treatment was invasive and deeply depressing," she said in her first media appearance since the March 4 poisoning in the British cathedral city of Salisbury.

"I try to take one day at a time and want to help my father until he fully recovers," she added.

"My life has been turned upside down and right now I am trying to come to terms with incredible changes in my life, both physical and emotional."

She called on everyone to respect her family's privacy and thanked all those who helped her.

"My recovery and that of my father remain my priority," she said.

After her video statement, the Russian embassy in London said it was happy to see that Skripal was "in good health".

However the diplomatic mission suggested she might be held in Britain against her will and insisted that Russian diplomats needed to see her.

"The United Kingdom has the obligation to give us an opportunity to speak to Yulia directly to make sure that she is not being held against her will and is not making statements under duress," the embassy said.

"So far we have grounds to suspect the opposite."

The embassy suggested that her statement in Russian was translated from English, implying she had been told what to say.

Sergei and Yulia Skripal were found slumped on a bench in the English city of Salisbury in March, sparking a bitter diplomatic crisis between Moscow and London, which says a Soviet-made nerve agent dubbed novichok was used on the pair.

Moscow has furiously denied any involvement.

"If a military-grade poison had been used, the man would have died on the spot. Thank God he recovered and that he left (hospital)."

A number of Russian chemists who worked on the novichok family of nerve agents had said earlier that the poison was so potent the Skripals might not recover and could suffer debilitating consequences for the rest of their lives.

Yulia Skripal was visiting her father when the attack took place.

Sergei Skripal moved to Britain in 2010 as part of a spy exchange after being imprisoned in Russia for selling secrets to British intelligence while he was working for the GRU, Russia's foreign military intelligence agency.