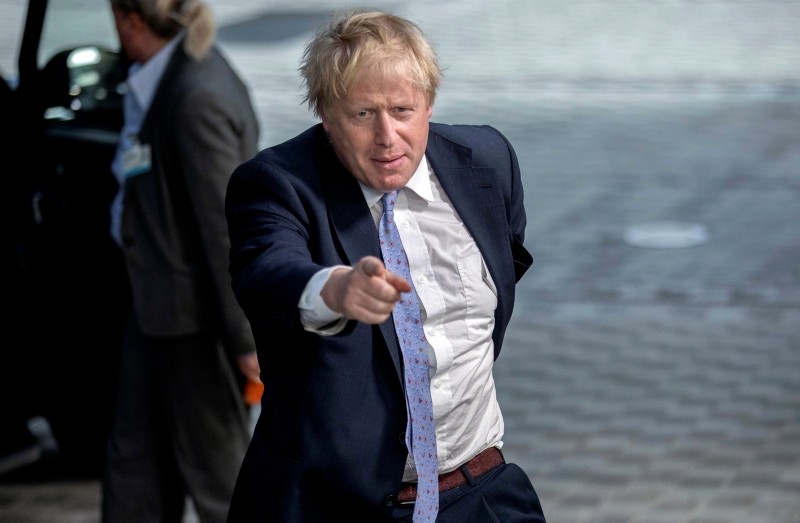 British Foreign Secretary Boris Johnson arrives at the European Council building in Brussels, Tuesday, May 15, 2018. (AP Photo)
by Compiled from Wire Services
May 24, 2018 12:00 am

Britain's Foreign Secretary Boris Johnson talked international relations and rude poetry with a hoax caller who pretended to be the Armenian Prime Minister in an embarrassing new gaffe for one of Britain's most prominent politicians.

In an 18 minute call, Johnson discussed relations with Russia, the Iran nuclear deal and the Syrian war, according to audio of the call uploaded on YouTube and shared on the Twitter pages of Russian pranksters Vovan and Lexus.

Britain's foreign office confirmed that Johnson had been hoaxed and said the perpetrator was "childish".

"I hope he will not poison me with Novichok," the prankster joked, referring to a nerve agent used in the March attack on ex-spy Sergei Skripal and his daughter, for which Britain has blamed Russia. Johnson can be heard chuckling on the other end of the line.

Later in the call, Johnson said he would like to come to Armenia to find out more about "Armenia's Novichok experiences", and they also talk about sanctions against Russia and high-profile individuals.

"You throw a stone in Kensington and you'll hit an oligarch," Johnson said, in reference to the central London district favored by Russian tycoons. "Some of them are close to Putin and some of them aren't."

Johnson is no stranger to controversy. In the run-up to Britain's 2016 referendum on EU membership, he compared the goals of the European Union to those of Adolf Hitler and Napoleon, causing consternation in European capitals.

Also in 2016, Johnson wrote a controversial poem about President Tayyip Erdoğan, involving wild oats and a goat, which the prankster complimented him on.

"You're very kind," Johnson said, before trying to bring the call to a close. Some minutes later, as the prankster is talking, the line goes quiet.

"The Foreign Secretary realized it was a hoax and ended the call. We checked it out and knew immediately it was a prank call," the Foreign Office said in a statement.

"The use of chemical weapons in Salisbury and Syria, and recent events in Armenia are serious matters. These childish actions show the lack of seriousness of the caller and those behind him."

The statement did not say when the call was made but it is thought to have been recorded on May 14, as the real leader of Armenia was to hold a meeting with the Russian president that day.

Alexei Stolyarov and Vladimir Kuznetsov, known as Lexus and Vovan, previously fooled other high-profile victims around the world. The two pranksters have denied links to Russia's security services. In 2015, they phoned Elton John pretending to be Russian President Vladimir Putin after the musician criticized Russia's stance on gay rights.