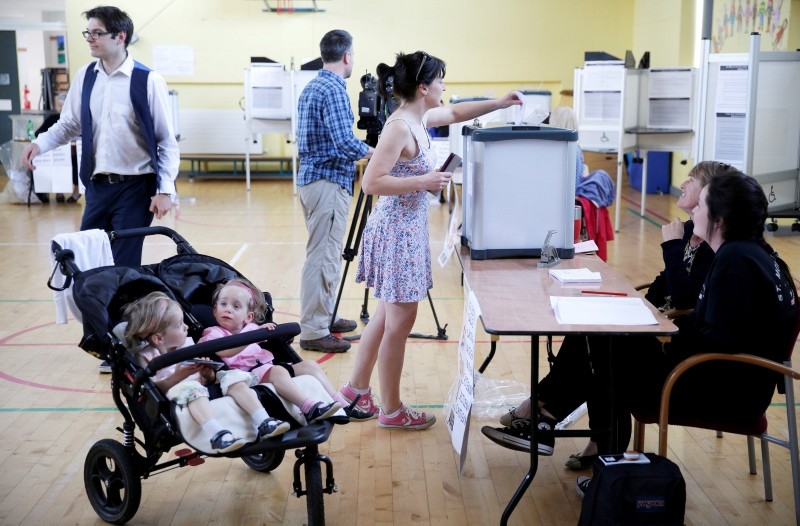 A woman votes while her children wait in their pushchair as Ireland holds a referendum on liberalizing its law on abortion, in Dublin, Ireland, May 25, 2018. (Reuters Photo)
by Compiled from Wire Services
May 25, 2018 12:00 am

Ireland voted overwhelmingly to liberalize some of the strictest abortion laws in Europe on Friday, according to an exit poll from a historic referendum in the traditionally Catholic country.

The vote to repeal the constitutional ban was predicted to win by 68 percent to 32 percent, according to a poll of 4,000 voters conducted by Ipsos/MRBI for the Irish Times.

The referendum was to decide whether the eighth amendment of the constitution is repealed.

The amendment, in place since 1983, requires authorities to equally protect the right to life of a mother and that of a fetus, from the moment of conception.

Prime Minister Leo Varadkar tweeted his support for the bill before a moratorium on campaigning took effect Thursday. He urged people to vote "yes" in favor of repeal.

Official results are not expected until Saturday afternoon or evening. Voting has already taken place on islands so that paper ballots can be taken to the mainland and counted in time.

"Yes" campaigners were handing out stickers at several major pedestrian crossroads Friday morning. Many people voted on their way to work and sported "I voted" buttons.

They didn't sway Vera Rooney, who voted in favor of keeping the ban in place.

"It is a hard decision but I just feel I don't have the right to take life. I think life is sacred and for that reason I had to vote no," said Rooney, who voted early Friday at the North Grand Church polling station in Dublin.

"Trust Women" was scrawled on the pavement outside the polling station in Dublin as voting opened. An opponent of the abortion clause repeal wrote: "Mama, save me, I love you."

"If we vote 'yes', every unborn, wanted and unwanted, will have zero rights," wrote Frances Kelleher, from Killarney. "I do not believe the smart people of Ireland want this unrestricted, abortion-on-demand bill. I will be voting no."

New abortion laws will now be discussed in parliament. The government proposes that terminations be allowed during the first 12 weeks of pregnancy. Later abortions would be allowed in special cases.