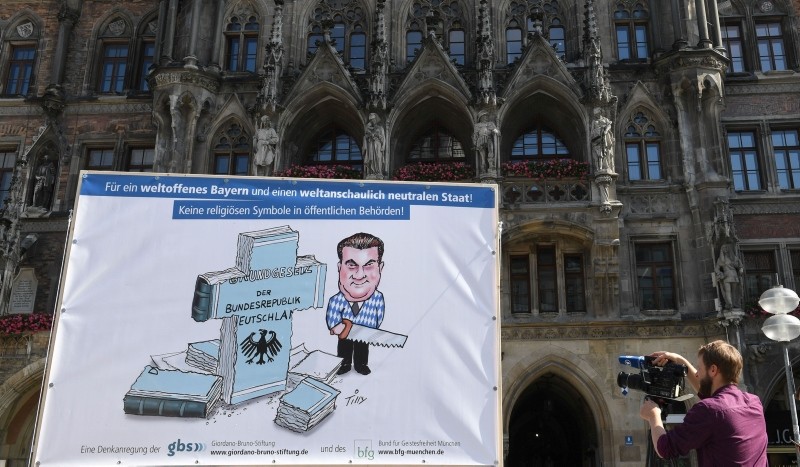 A cameraman films a banner depicting Bavaria's State Premier Markus Soeder who saws an edition of the German constitutional law into a cross during a protest rally against a new decree in Bavaria, Germany, on June 1, 2018. (AFP Photo)
by Compiled from Wire Services Jun 01, 2018 12:00 am

A controversial decree requiring Christian crucifixesto be put up at entrances of most public buildings in Bavaria came into force Friday, sparking accusations of identity politics ahead of elections in the southern German state.

Universities, museums and theaters have been advised to display one, but have not been obliged to, a spokeswoman for the Bavarian Art and Science Ministry said on Wednesday.

"The obligation to mount crosses in the entrance area also applies to all authorities under the Art and Science Ministry, with an exception for colleges, theaters and museums," she said. "For them there is a recommendation."

Markus Soeder, Bavaria's conservative state premier, had initiated the measure in April, saying "the cross is a fundamental symbol of our Bavarian identity and way of life".

But the order sparked an outcry, with critics accusing Soeder of politicizing a religious symbol as his CSU party battles to claw back voters who have turned to the far-right and Islamophobic AfD ahead of state election in October.

Soeder was also widely mocked, including by the state premier of neighboring Baden-Wuerttemburg, Winfried Kretschmann, who said a photo of his Bavarian colleague holding the cross made him "think of a vampire film".

But among the harshest condemnation was that from Cardinal Reinhard Marx, the president of the German Bishops' Conference, who warned Soeder that "if the cross is viewed only as a cultural symbol, then it has not been understood."

"Then the cross is being expropriated by the state," said Marx in an interview with Sueddeutsche daily, adding that it must not be used to exclude others.

Soeder is expected in Rome as the cross-display obligation comes into force, with a meeting with Pope Francis and Pope Emeritus Benedict XVI, himself a Bavarian.

After scoring the worst result since 1949 in September elections, the CSU -- sister party of Chancellor Angela Merkel's CDU -- has been desperately seeking to woo voters back from the far-right.

Campaigning on an anti-Islam platform, the AfD has capitalized on German fears of the arrival of more than a million asylum seekers, many from Muslim countries.

After becoming the biggest opposition force in parliament, the AfD is poised to enter Bavaria's state legislature.

The increasingly fragmented political landscape in Germany means that the CSU may lose its absolute majority in Bavaria, prompting it to take an increasingly hard line on issues related to immigration or religion.