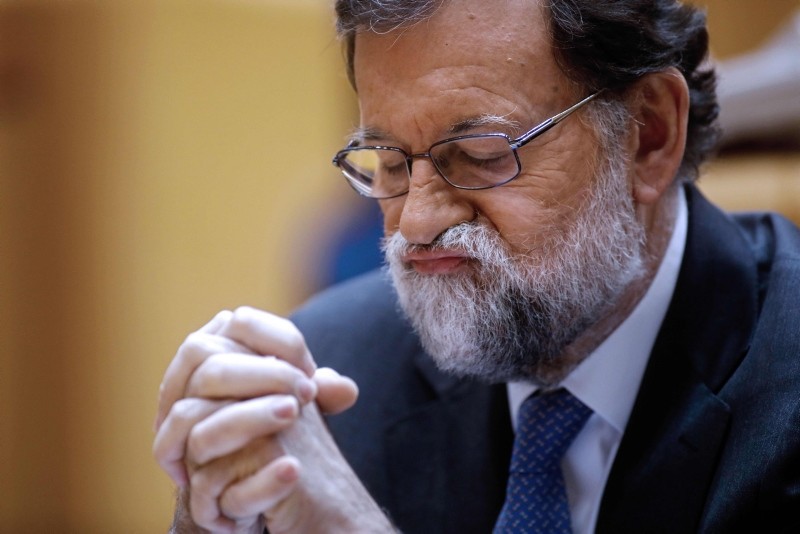 In this file photo taken on October 27, 2017 Spain's Prime Minister Mariano Rajoy, gestures as he attends a session of the Upper House of Parliament in Madrid (AFP Photo)
by Compiled from Wire Services Jun 01, 2018 12:00 am

Pedro Sanchez, the leader of the largest opposition bloc, the socialist party, could be sworn in as early as this Saturday and appoint his Cabinet next week.

To prevent a power vacuum after a no-confidence motion that saw Mariano Rajoy ousted, Spanish law makes the motion's author - in this case, Sanchez - the country's new leader as soon as the king swears him in.

The end of Rajoy's, more than six-year, reign as Spanish prime minister was the first ouster of a serving leader by the country's parliament in four decades of democracy.

Rajoy went to shake hands with Sanchez after the result was announced.

The reputation of Rajoy's Popular Party's was badly damaged by a court verdict last week that identified it as a beneficiary of a large kickbacks-for-contracts scheme.

Sanchez saw that as his opening and managed to muster enough support from smaller parties to send him to La Moncloa palace, the seat of government in Madrid.

Sanchez, 46, takes the helm of the 19-country eurozone's fourth-largest economy at a time when the European Union faces numerous challenges, including the United Kingdom's departure from the bloc and illegal immigrants continue to enter the continent from North Africa.

Sanchez and his party are staunch supporters of the EU and the continent's shared currency.

The Madrid stock exchange was up nearly 1.6 percent after Sanchez won the vote, earning a standing ovation from his party's lawmakers.

Sanchez, who will be Spain's seventh prime minister since the country's return to democracy in the late 1970s, arrives in power after a spectacular turnaround in his political fortunes.

He was ousted by his own party's heavyweights in 2016 over back-to-back losses in general elections and after he tried to block Rajoy's bid to form a government.

The incoming prime minister has outlined that his priorities will be social issues before calling elections, though he hasn't said when there might be a vote.

He faces a tough time, however, catering to demands from small nationalist parties whose votes he captured in the no-confidence motion.

The support of leftist and nationalist parties for ousting Rajoy won't necessarily lead to parliamentary backing for Sanchez's government and could produce a political stalemate.

President of the European Commission Jean-Claude Juncker, has full confidence in the new Spanish government, a spokeswoman said at a daily press briefing on Friday.

"He has sent [Prime Minister Pedro Sanchez] a congratulatory letter stating his confidence in the Spanish government to continue to contribute in a constructive manner to a stronger, more united and fairer European Union," she said.

Meanwhile, Catalan authorities announced their new cabinet on Friday, paving the way for Madrid to end direct rule over the region by excluding four nominees under investigation for their role in its independence drive.

The news coincided with the departure of Mariano Rajoy as Spain's prime minister, voted out of office by parliament on Friday and replaced by Socialist leader Pedro Sanchez.

Sanchez said on Thursday that, if his party's motion of no-confidence against Rajoy succeeded, he would resume dialogue with the government of Catalonia.

Rajoy imposed direct rule on the region in October after sacking its government following an independence referendum that Spanish courts declared illegal.

His failure to resolve the political crisis caused by the standoff contributed to dissatisfaction with him, though the no-confidence vote - backed by Catalan pro-independence parties - was triggered primarily by a long-running corruption trial involving members of his center-right party.

Under the terms of its rule, Madrid is obliged to devolve power back to the Catalan government once it is fully constituted and its cabinet members named.

In his first cabinet list presented on May 19, Catalan leader Quim Torra included candidates either in exile as a consequence of the independence bid or under investigation for their role in it.

Spain's central government then refused to publish their names in the Catalan official gazette, effectively preventing the new regional administration from taking office.

The cabinet announced on Friday includes eight men and six women, with Elsa Artadi as spokeswoman, replacing Jordi Turull who served under exiled former Catalan leader Carles Puigdemont and is in custody awaiting trial for his part in the independence drive.