US, allies launch NATO war games in the Baltics, Poland 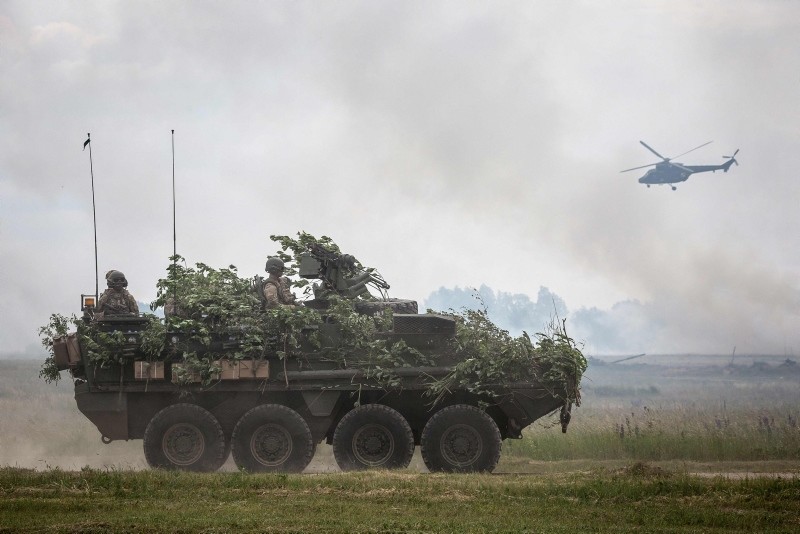 Some 18,000 troops from 19 mostly NATO countries began annual U.S.-led military exercises in Poland and the Baltic states on Sunday to boost combat readiness on the alliance's eastern flank as it faces an increasingly assertive Russia.

The eighth Saber Strike maneuvers, which run until June 15, come after it was revealed Poland is considering a proposal to welcome a permanent deployment of U.S. troops to the country.

A Polish defense ministry "information document" emerged this week showing that Warsaw could spend between $1.5 to $2 billion (1.3 to 1.7 billion euros) to help cover the cost of stationing a U.S. tank unit in Poland.

The proposal triggered immediate criticism from Moscow, with the Kremlin insisting that any such deployment "will not benefit in any way the security and stability on the continent".

The U.S. has ramped up its presence on NATO's eastern flank and notably Poland since Russia's 2014 annexation of Crimea from Ukraine.

The U.S. leads a multi-national NATO battle group in Poland. Germany, Britain and Canada command three others in nearby Baltic states Estonia, Latvia, Lithuania, where Saber Strike maneuvers are planned.

"They (NATO battalions) will be specifically tested during Saber Strike, it demonstrates the alliance commitment to one another," US Brigadier General Richard Coffman told officials at Sunday ceremonies in the Lithuanian capital Vilnius launching the exercises.

The exercises demonstrate "the enhanced flexibility of ground and air forces to rapidly respond to a crisis. This allows for the right presence where we need it," he said, adding that "we are fully capable to conduct combined and joined operations."

Non-NATO member Israel will be taking part in Saber Strike for the first time.

Speaking in Warsaw on Monday, NATO Secretary General Jens Stoltenberg said he expected leaders at a July NATO summit in Brussels to "make decisions on reinforcement, readiness and military mobility" of forces in Europe, particularly with regard to the four battle groups deployed since 2016.

The U.S. army also set up a new European headquarters in Poland in May 2017 to command some 6,000 of its troops deployed in NATO and Pentagon operations in the region.

The move was one of the largest deployments of U.S. forces in Europe since the Cold War and was meant to reassure NATO's easternmost allies spooked by Russia's frequent military exercises near their borders and the Crimea annexation.

Moscow complained about the prospect of the deployment of Patriot systems in Poland and Romania, which it says violates a 1987 arms treaty and could be tailored to shoot missiles at Russia.

This year's Saber Strike maneuvers will be partly held in this sensitive region.