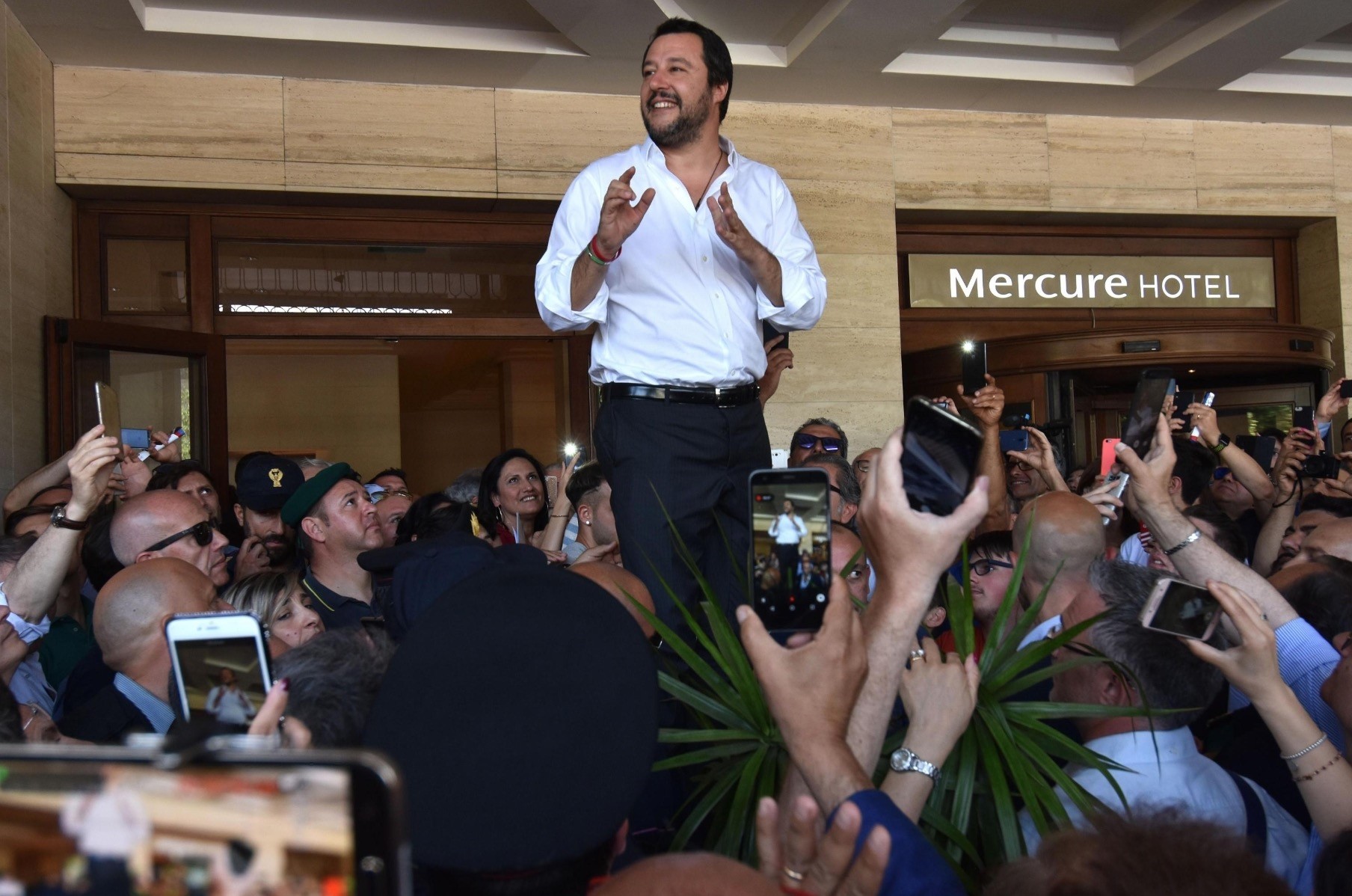 Newly minted deputy Prime Minister Matteo Salvini in Italy's populist coalition government traveled to Sicily, one of the country's main refugee landing points, to push the anti-immigration platform that propelled him to power."Italy and Sicily cannot be Europe's refugee camp," he told a crowd of supporters under the blazing sun in the southern Sicilian town of Pozzallo, an illegal immigration hotspot.

"Nobody will take away my certainty that illegal immigration is a business ... and seeing people make money on children who go on to die makes me furious," he added.

His comments came as more than 50 immigrants drowned in the Mediterranean on Sunday, with 48 bodies found off Tunisia's southern coast and nine Syrians – including seven children – killed when their vessel sank off the coast of Turkey.

The port town of Pozzallo is also on the immigration front line as one of the main landing points.

A crowd of enthusiastic supporters and a smaller group of protesters had earlier gathered in front of the gates of the town's immigrant center where Salvini would give his speech, trading insults and nearly coming to blows.One protester brandished a sign saying "refugees welcome," while a supporter said, "We don't want any more pests," and others simply chanted "Matteo, Matteo."

After delivering his speech, Salvini went inside the center to meet some of the 158 people who had landed in Pozzallo when they were picked up by a boat on Friday.

The rescue operation, which was coordinated by the Italian coast guard, happened just hours after Salvini took his oath of office, and said he would ask his ministry's experts "how to reduce the number of arriving immigrants and increase the number of expulsions."

"The good times for illegals is over – get ready to pack your bags," he said on Saturday.

However, while he retained the fighting tone that helped spur his rise to power, he did temper his words when it came to nongovernmental organizations (NGOs) carrying out rescues at sea, which he has previously called "smugglers" and accused of complicity with people traffickers.

Several NGO boats have been found to be illegally trafficking people from the coasts of North Africa to the European mainland.

"I think it's better to spend money in the countries of origin, and now if there are NGOs that want to work for free, that's fine," Salvini said.The leader of the far-right League party also said the new government would "not take a hard line on immigration but one of common sense."

His fellow deputy prime minister, head of the anti-establishment Five Star Movement Luigi Di Maio, has also called rescue NGOs "taxis on the sea," although his rhetoric on immigration is more measured than that of the League.Salvini is on the road seeking to rally support for his party's candidates in municipal elections later this month, as part of a broader effort to boost the traditionally northern party's profile in the country's poorer south.

European Union interior ministers will meet tomorrow to discuss possible reforms of the EU's controversial Dublin rule whereby would-be refugees must file for asylum in the first bloc member state they enter, a rule that has already been broken since 2015 when German Chancellor Angela Merkel de-facto opened Europe's doors to mass immigration, with countries like Greece and Italy paying the first-landing price.

However Salvini said he would not be attending, as he will be in Italy's Parliament for a confidence vote on the new coalition with Five Star.

Salvini has condemned the Dublin rule as unfairly burdening Mediterranean countries and leading to "an obvious imbalance in management, numbers and costs."

The accord does heavily penalize Italy, which has seen millions of immigrants arrive in the past three years, and while many have illegally managed to get to France and Germany, many haven't.

Previously, the vast majority would continue their journeys to northern Europe, but the introduction of EU-backed processing centers to ensure immigrants are identified at their first European entry point and tighter border controls installed by France, Switzerland and Austria are now creating roadblocks along this well-worn route.

A controversial agreement between Italy's former center-left government and authorities and militias in Libya has triggered a decline in overall arrivals of some 75 percent since the summer of 2017.