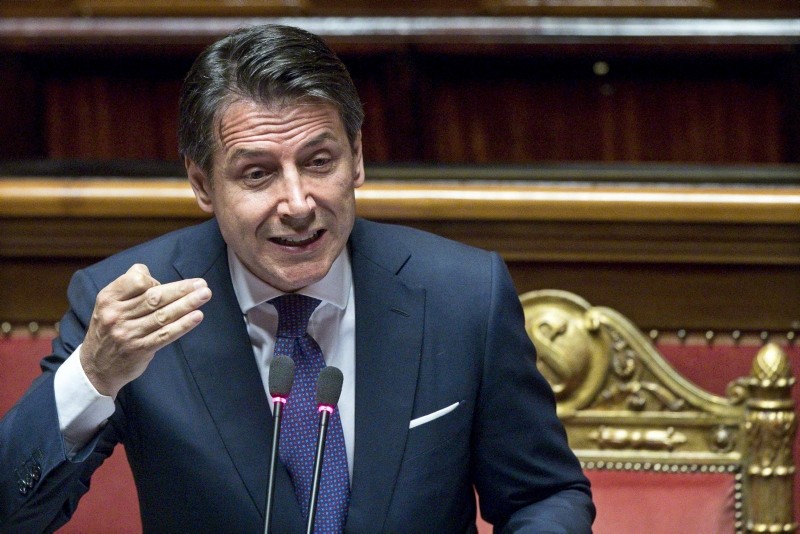 Italian Prime Minister Giuseppe Conte addresses the Senate asking it to put its confidence in his 5-Star Movement/League coalition government in Rome, Italy, June 5, 2018. (EPA Photo)
by Compiled from Wire Services Jun 05, 2018 12:00 am

Italian Premier Giuseppe Conte declared Europe's immigration policy a "failure" and demanded for it to be renegotiated as he outlined a heavy-spending policy agenda of Italy's populist "government of change" Tuesday.

In his first policy address, Conte readily acknowledged that the coalition government made up of the anti-establishment 5-Star Movement and right-wing League marks a radical shift from the Italian status quo.

"If 'populism' is the attitude of leaders to listen to the people, ... and if 'anti-system' means introducing a new system that removes the old privileges of power, then this government deserves both these descriptions," said the premier, who was sworn into his first political office Friday.

Conte responded to concerns about the xenophobic League's rhetoric, insisting that Italy "isn't racist" and accepts its responsibilities to welcome and integrate legitimate refugees. But he said the rest of the European Union must take on a greater burden of accepting refugees, as well as negotiating with migrants' home countries and helping send back those who don't qualify for asylum.

Making his own the League's demand for a crackdown on the human smuggling networks and organized crime that has infiltrated Italy's migrant welcome centers, Conte declared: "We will put an end to the business of immigration that grew disproportionately under the cloak of a pretend solidarity."

Conte was interrupted nearly three-dozen times during his 75-minute speech to the Italian Senate ahead of a confidence vote on the new government later Tuesday. He is to deliver a similar address Wednesday before Parliament's lower Chamber of Deputies.

Between them, the 5-Stars and League have a slight parliamentary majority that is expected to give the government the votes it needs to start governing.

Conte, a law professor at the University of Florence until he was tapped to as premier, noted the historic nature of the first confidence vote, which caps a week that saw the installation of Western Europe's first populist government after three months of political and financial turmoil in Italy.

On Russia, which faces EU sanctions over the Ukraine crisis, Conte said: "We will promote a review of the sanctions system."

The new premier said his government intended to turn with more frequency toward Russia.

"We'll be the advocates of an opening towards Russia," Conte said, adding the new coalition would advocate for an end of sanctions that hurt Russian civil society.

He also sought to assuage fears elsewhere in Europe that the euroskeptic attitude the League and 5-Stars displayed on the campaign trail and in drafts of its government policy paper will transfer into government policy.

"Europe is our home. It is the home of all of us," Conte said. But he added that as a founding member of the EU, Italy has the absolute right to demand a better deal on financial and immigration regulations.

Conte gave his speech standing between his two political masters: 5-Star Leader Luigi Di Maio and League leader Matteo Salvini. The two gave up their own ambitions to be premier and agreed to find a compromise candidate to head a previously unthinkable alliance.

As expected, the new premier's address drew heavily from the 5-Star-League's 57-page policy agenda, the "Contract for the Government of Change," repeating its call for a two-tiered flat tax, a basic income for poor Italians and a "dignified" minimum wage. Conte gave no specifics on how the expensive public programs would be financed, other than by calling for new criminal penalties for flagrant tax scofflaws.

Conte said Italy was committed to reducing its public debt, but said it wouldn't do it through austerity measures. Rather, he said the government plans to grow the economy through environmentally sustainable development, reduction in bureaucracy and a more business-friendly administrative climate for the small and medium-sized companies which are the backbone of the economy.

Leading the opposition in the Senate Tuesday, Democratic Party Sen. Franco Mirabelli said it was fine to call for decent salaries and a speeding up of public works contracts. He said the Democrats could support some of the new government's policy proposals.

"But the point is: How do you do it? With what resources?" Mirabelli said, articulating the concern over how the 5-Star-League government will finance its economic goals.

Mirabelli also criticized Conte for what he said was inadequate attention in the government's plan to fighting the Mafia. He noted that League leader Salvini — the new Italian interior minister — stumped about migration while in Sicily on Sunday "and didn't say a word" about organized crime.