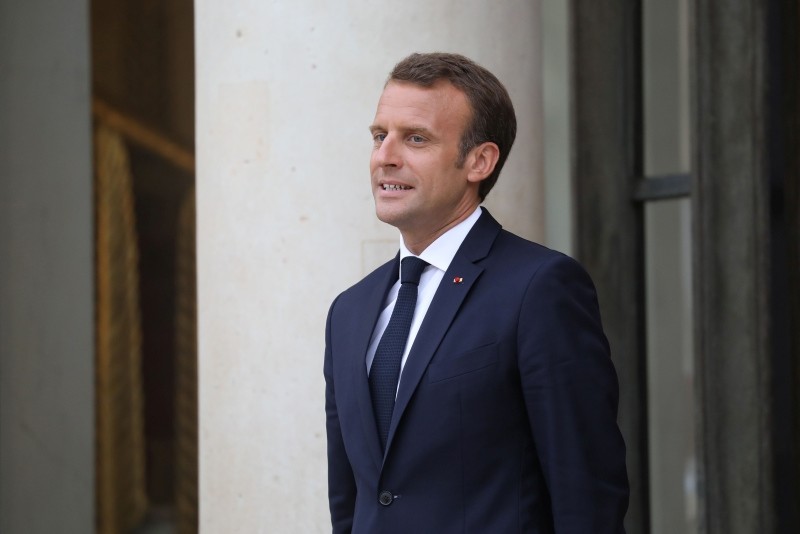 French President Emmanuel Macron stands at the entrance after a meeting with Israeli Prime Minister at the Elysee Palace in Paris, on June 5, 2018. (AFP Photo)
by Jun 05, 2018 12:00 am

French President Emmanuel Macron said on Tuesday his phone calls with U.S. President Donald Trump and other world leaders were just like sausages: better not explain what's inside.

During a news conference with Israeli Prime Minister Benjamin Netanyahu, Macron was asked about a CNN report on Monday saying that a phone call between the French leader and Trump last week had been "terrible".

Borrowing a famous quote from 19th century Prussian statesman Otto von Bismarck, Macron summed up his policy of refraining from making off-the-record comments about his conversations with other world leaders.

"As Bismarck used to say, if we explained to people how sausages were made, it's unlikely they'd keep eating them," Macron told reporters.

"So I like it when people see the finished meal, but I'm not convinced the kitchen commentary helps with delivering the meal or eating it," Macron added.

A readout from the French presidency of Macron's call with Trump last week said the 40-year old president had told Trump that his decision to slap tariffs on the exports of U.S. allies were both "illegal" and a "mistake".

The shorter White House readout of the same call said the conversation had focused on trade and immigration, without elaborating.

"Macron thought he would be able to speak his mind, based on the relationship. But Trump can't handle being criticized like that," CNN quoted an unidentified source as saying. "Just bad. It was terrible."

Macron, appalled by his predecessor Francois Hollande's frequent off-the-record comments to journalists, has kept the press at a distance since his election last year and banned his aides from giving behind-the-scenes accounts of his presidency.

"You can go and ask the people who make comments, but here in Paris we don't make comments on how it went, or how hot, cold, warm or terrible things are. We just go ahead and do things," Macron said.

He added that he would have a "useful" and "frank" exchange with Trump at the next G7 summit in Canada on June 7-8 about both issues on which they agree and those where they disagree.