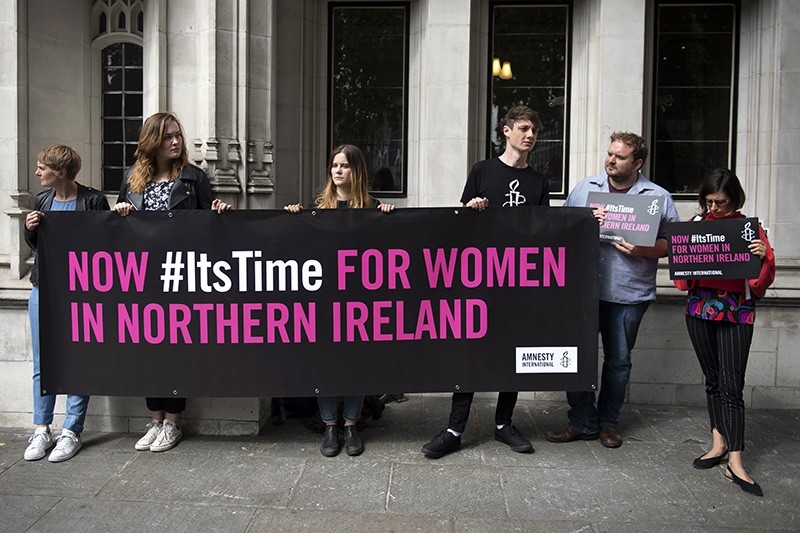 Campaigners supporting a change in Abortion laws in Northern Ireland outside the Supreme Court, Central London, Britain, June 7, 2018. (EPA Photo)
by Jun 07, 2018 12:00 am

Britain's Supreme Court said Thursday it would have declared Northern Ireland's abortion laws incompatible with human rights legislation if not for a procedural technicality, in what abortion rights campaigners hailed as a victory.

A majority of justices said they would have ruled the current law, which outlaws abortion even in cases of rape, incest and fatal fetal anomaly, incompatible with the European Convention on Human rights (ECHR).

But a majority also ruled that the Northern Ireland Human Rights Commission (NIHRC), which brought the appeal, did not have the power to "institute abstract proceedings of this nature."

"It follows that the Supreme Court has no jurisdiction in these proceedings to give relief in respect of the challenge Northern Ireland abortion law," the ruling added.

Despite not issuing an official ruling, the Supreme Court had delivered a victory for reformist campaigners, said the NICHR.

"The highest court in the U.K. has today agreed with the Commission that Northern Ireland's laws on termination of pregnancy are incompatible with human rights," said Chief Commissioner Les Allamby.

"We took this case to bring greater clarity to the law and we welcome the court's decision."

The court's findings are likely to raise political pressure on London and Belfast to alter legislation, potentially setting Prime Minister Theresa May on a collision course with the anti-abortion Democratic Unionist Party (DUP) and further complicating her Brexit plans.

The DUP is the biggest party in Northern Ireland and also props up May's minority government, giving her the votes she needs to get Brexit legislation through the House of Commons.

The devolved government in the British province is responsible for deciding abortion laws, but Westminster can step in if it is a human rights issue.

Adding to the complication, Northern Ireland has been unable to form a power-sharing government for over a year.

Northern Ireland Secretary Karen Bradley, said the government was "carefully considering the judgment and its implications.

"The analysis and comments from the court on the issue of incompatibility will be clearly heard by this House and politicians in Northern Ireland."

Jonathan Mance was one of five of the seven judges who would have ruled that Northern Ireland's current laws contravene European legislation.

"I would have concluded without real hesitation ... that the current state of Northern Ireland is incompatible with Article 8 of the Convention," he wrote, adding that "the present law clearly needs radical reconsideration."

The judges decided, however, that they could not officially issue a ruling as the NICHR could only bring cases through specific victims, not on general principles.

"If an individual victim did return to court in relation to the present law, a formal declaration of incompatibility would in all likelihood be made."

Unlike in mainland Britain, abortion is illegal in Northern Ireland, carrying a potential life sentence, except when a woman's life is at risk or there is a permanent or serious danger to her mental or physical health.

The NIHRC argued that the current law subjects women to "inhuman and degrading" treatment, causing "physical and mental torture" as it bans abortion in cases of rape, incest, serious fetal anomaly and fatal fetal abnormality.

Four of the judges said that outlawing abortions in cases of rape, incest and fatal fetal abnormality would likely contravene ECHR rules.

Another judge reached the same conclusion with regards to fatal fetal abnormalities, but not in the case of rape and incest.

But Sarah Ewart, who traveled from Northern Ireland for a termination in England in 2013, said she was "relieved" by the court's actions.

"I am relieved to hear the highest court in the land has recognized that Northern Ireland is in breach of human rights for people who find themselves with fatal fetal abnormality and have said that the law needs to be changed, so we will keep going until we get that change."