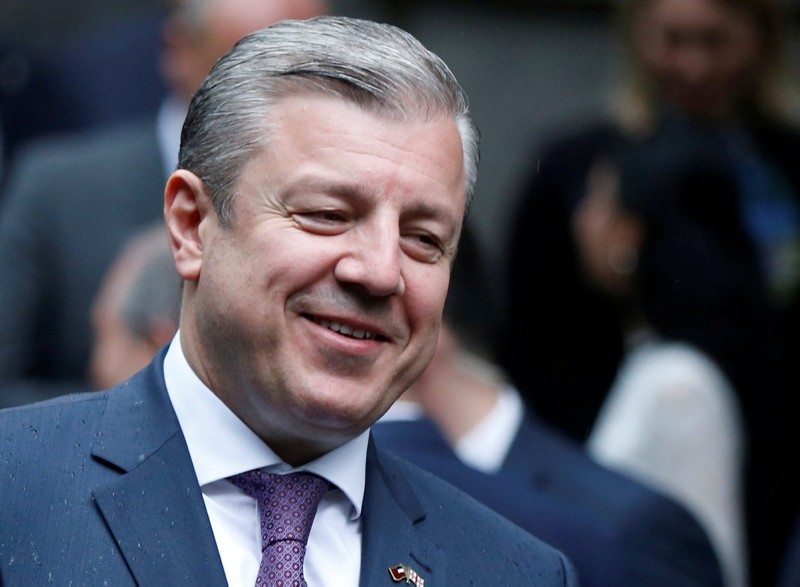 Georgia's Prime Minister Giorgi Kvirikashvili leaves after a family photo in Tbilisi, Georgia, May 26, 2018. (Reuters Photo)
by Compiled from Wire Services Jun 13, 2018 12:00 am

Georgia's Prime Minister Giorgi Kvirikashvili resigned on Wednesday amid a disagreement with the leader of the ruling party, Bidzina Ivanishvili, who is a former prime minister and the ex-Soviet country's richest man.

Kvirikashvili, 50, has been prime minister since 2015.

Since May 31 Georgian capital Tbilisi has seen thousands of people turn out onto the streets over accusations of political influence into a murder trial.

According to RIA Novosti news agency the meeting began after a court allowed a reduction in the charge of a participant in the fight whose father previously served in the general prosecutor's office.

Following Georgian prosecutor general's resignation, several thousand protestors gathered in front of the parliament where they demanded the resignation of the government.

Under the constitution, the whole cabinet has to resign along with the prime minister.

The ruling party, Georgian Dream, must then submit a new cabinet list to Georgia's president within seven days. President Giorgi Margvelashvili then has a further seven days to submit the new cabinet to parliament for approval.

Ivanishvili, 62, a former prime minister, made a political comeback in May, becoming again the chairman of Golden Dream amid tensions among party members over a range of issues.

His Georgian Dream coalition won control of parliament in October 2012, defeating the party of ex-president Mikheil Saakashvili, leader of the 2003 Rose Revolution.

Ivanishvili's coalition later split, but Georgian Dream won a parliamentary election in 2016, cementing its status as the ruling party in the country of 3.7 million people.

Ivanishvili stepped down from the posts of prime minister and party chairman in 2013, though critics say he has continued to run the country from behind the scenes.