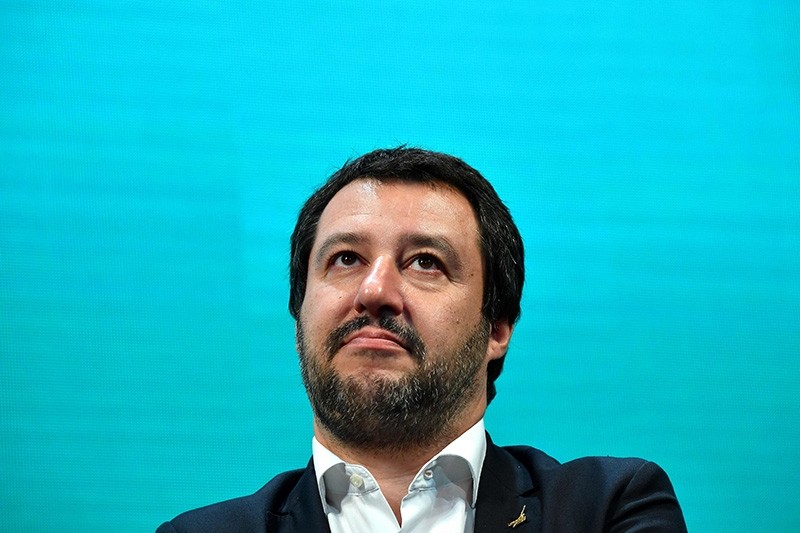 Italy's Interior Minister and deputy PM Matteo Salvini attends a meeting with the Italian Confesercenti ( Association of commercial businesses ) on June 13, 2018 in Rome. (AFP Photo)
by Daily Sabah with Wires Jun 13, 2018 12:00 am

Italy's Interior Minister Matteo Salvini said Wednesday that without an "official apology" from France, a planned meeting between Prime Minister Giuseppe Conte and French President Emmanuel Macron on Friday should be canceled, amid a diplomatic spat between the two countries over the handling of a migrant crisis.

"If an official apology doesn't arrive, prime minister Conte would be right not to go to France," Salvini told reporters after demanding that France take in more migrants.

On Tuesday Macron accused Italy of "irresponsibility" after the Rome government refused to open its ports to the NGO Aquarius ship carrying hundreds of migrants in the Mediterranean.

Italy's new populist government was quick to respond to the accusations denouncing "hypocritical lessons" from countries like France on migrants.

"The statements concerning (the humanitarian ship) Aquarius that come from France are surprising... Italy cannot accept hypocritical lessons from countries that have preferred to look the other way on immigration," the government said in a statement on Tuesday.

"We will not change (our position) on ships belonging to non-governmental organizations," Salvini said earlier Wednesday in an interview with the Corriere della Sera newspaper.

Salvini said in three years, France has accepted only 640 people. "So I ask President Macron to pass from words to action and tomorrow morning welcome the 9,816 France promised to welcome as a sign of concrete generosity and not just words."

However, Italy's Economy Minister Giovanni Tria canceled a meeting with his French counterpart scheduled for Wednesday in Paris over the row.

"The minister #GiovanniTria has cancelled his meeting with the French Minister of the Economy and Finance (Bruno) #LeMaire," the ministry said on Twitter.

France, in turn, expressed "regret" over the cancellation.

The 629 migrants saved by the Aquarius, run by French NGO SOS Mediterranee, were stuck on the overcrowded ship for over 30 hours as Italy and Malta bickered over who should take them before Spain offered to receive them in its port of Valencia.

The migrants, who were transferred onto three ships yesterday, are expected to arrive around Saturday night in Valencia, depending on weather conditions.

The episode, coming a week after the installation of Italy's new populist government, has heightened tensions within the European Union over migration.

While Spain adopted a diplomatic tone with Italy when it announced it would take the migrants, relations between Rome and Paris have deteriorated in an explosion of accusations and counter-accusations.

Macron denounced the decision to block the Aquarius, operated by the Franco-German charity SOS Mediterranne, saying international law obligated Italy to take in the migrants.

"There is a degree of cynicism and irresponsibility in the Italian government's behavior with regard to this dramatic humanitarian situation," government spokesman Benjamin Griveaux quoted Macron as telling his cabinet.

"If the French have the humility to say they are sorry, we can put it behind us and be friends like before," Salvini told reporters on the sidelines of a business conference.

Other countries have joined in on taking sides on the issues, with Austria and Hungary supporting Italy's position.

Austrian Chancellor Sebastian Kurz said an "axis of the willing" between Rome, Vienna and Berlin makes sense because the countries form one of the main travel routes into Europe for migrants who have crossed the Mediterranean.

Kurz told reporters in Berlin that a growing number of European governments agree on the need to curb uncontrolled migration and crack down on people trafficking.

Germany's Interior Minister Horst Seehofer also said he spoke Tuesday to his Italian counterpart, adding that the three countries would press ahead on the issue. Seehofer has taken a tough line on immigration that's put him at odds with German Chancellor Angela Merkel.

Also on Wednesday morning, an Italian coast guard vessel with 937 migrants aboard docked in Catania, Sicily.

Transport Minister Danilo Toninelli said the fact that migrants rescued by Italian ships were landing in Italy showed that the government was not "inhumane or xenophobic."

Italy has taken in more than 640,000 mainly African migrants and refugees over the past five years.

Several EU countries have housed migrants who entered the bloc via other routes, with Germany admitting more than a million people in recent years.

Salvini's League scored its best-ever result in March national elections, partly on pledges to deport hundreds of thousands of migrants and halt the flow of newcomers, and has formed a coalition with the anti-system 5-Star Movement.