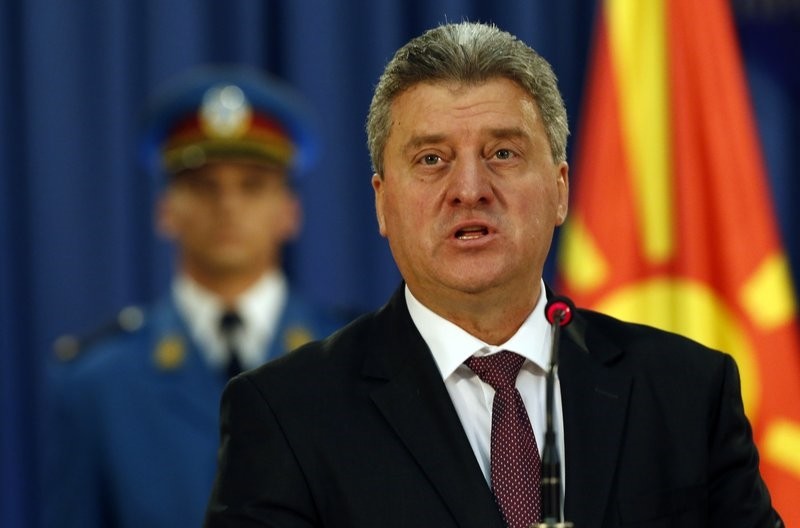 In this Oct. 28, 2016 file photo, Macedonia's President Gjorge Ivanov speaks during a media conference after talks with his Serbian counterpart Nikolic in Belgrade. (AP Photo)
by Associated Press Jun 13, 2018 12:00 am

Macedonia's president said Wednesday he would not sign off on an historic deal that would change the country's name, the most potentially disruptive reaction so far to the agreement with Greece that has received diverging reactions in both countries.

President Gjorge Ivanov said the agreement, which would rename Macedonia as Republic of North Macedonia, gave too many concessions to Greece.

The deal reached by the two countries' prime minister is expected to be signed by their foreign ministers this weekend. After that, Macedonia's parliament would vote on it, and if it is approved, Ivanov's signature would be needed.

If the president refuses to sign, the deal would return to parliament for another vote. Ivanov would have to sign off on the agreement if it passed a second time.

The name dispute, which has prevented Macedonia from joining international institutions such as NATO, has roused strong nationalist sentiments and poisoned the two countries' relations since the Balkan country declared independence from Yugoslavia in 1991.

Greece argues that the term "Macedonia" implies a claim on the territory and ancient heritage of its own northern province of the same name — the birthplace of ancient warrior king Alexander the Great.

The two prime ministers' efforts to forge an agreement face strong dissent, with opponents staging large protests on both sides of the border. The issue threatened to split Greece's governing coalition, and provoked a rift between Macedonia's Prime Minister Zoran Zaev and Ivanov.

New calls were circulating Wednesday on social media for renewed street protests, with opponents on both sides arguing their prime ministers conceded too much to reach the deal. In Macedonia, Zaev has said he will put the deal to a referendum in the fall.

Zaev, accompanied by Foreign Minister Nikola Dimitrov, visited Ivanov Wednesday to brief him on the deal. But Ivanov refused to discuss the issue.

"President Ivanov ... left the meeting, refusing to talk about the achievements of this historical agreement," the government said in a statement.

"I think Prime Minister Zaev's most difficult task will be to actually explain the deal, to build political consensus for the implementation and of course the upcoming referendum," said political analyst Petar Arsovski.

Defense Minister Panos Kammenos, whose right-wing Independent Greeks party is the coalition partner in Tsipras' government, said he would oppose an agreement in a parliamentary vote. This would leave the left-wing prime minister dependent on support from political opponents to ratify the deal in parliament.

The head of Greece's main opposition New Democracy party, Kyriakos Mitsotakis, described the agreement as "deeply problematic" and called on Greece's president to intervene so the deal can be debated in parliament before it is signed, instead of after.

On the streets of both capitals, reactions were mixed.

"We lost the country, this is a disaster," 45-year-old lawyer Mila Ivanovska said in Skopje, the Macedonian capital, and began to cry.

"You, Slavs from Skopje through the centuries, you have never been true Macedonians," said Athenian resident Konstandinos Goutras.

But for others the deal marks a welcome end to a protracted dispute.

"North Macedonia is acceptable for me," said Svetlana Jancevska, a 55-year-old music teacher in Skopje, adding that it will "not damage my identity as Macedonian. The language remains Macedonian and that makes me happy. It was high time for the problem to be solved."

The agreement should pave the way for the former Yugoslav republic to begin the process of acceding to NATO and the European Union, and was welcomed by international officials.

The dispute was deadlocked for years but hope for a resolution was rekindled after Zaev became Macedonia's prime minister last year, replacing conservative Nikola Gruevski who had served as prime minister for a decade.

Opponents in Greece object to any use of the term "Macedonia" in their northern neighbor's name, fearing territorial claims and seeing the use of the name as a usurping of Greece's ancient heritage. Opponents in Macedonia disagree with any modification to their country's name, seeing it as a threat to their national identity.

While both sides have announced certain details of the deal, the full text has not been made public yet.

According to what has been released, the citizens of the newly named country will be called "Macedonian/citizen of the Republic of North Macedonia." The deal includes provisions for labels to be placed on statues erected in Macedonia depicting the likeness of Alexander the Great which make clear they refer to ancient Greek times.

The deal is to be signed by the two foreign ministers and then ratified by Macedonia's parliament.

Greece will then back invitations for Macedonia to join NATO and start negotiations on joining the EU. However, Tsipras said, this will be contingent on Macedonia completing the constitutional changes.

For his part, Zaev has said the deal will be put to a referendum in his country in the autumn.