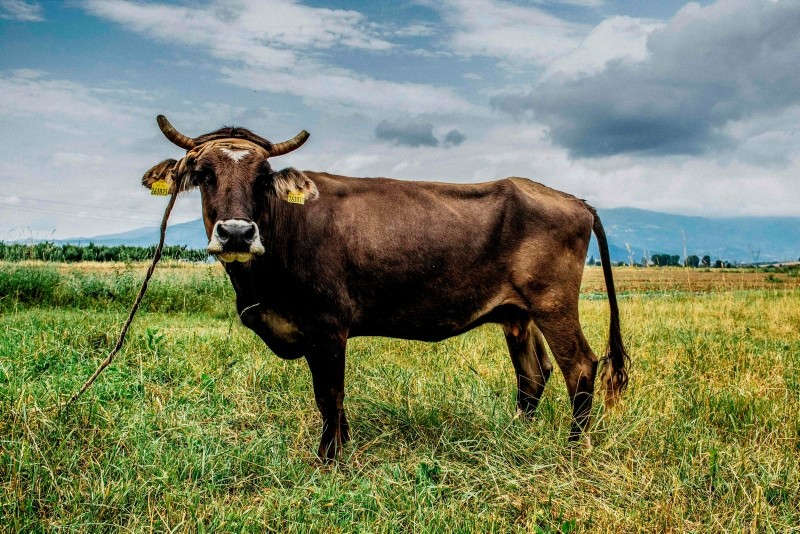 This handout picture taken near the village of Kopilovtsi on June 10, 2018 and released on June 11, 2018, by the Four Paws Foundation shows Penka the cow that risked death by staying over the EU border. (AFP Photo)
by Compiled from Wire Services Jun 13, 2018 12:00 am

Swatting away the flies with her long tail, Penka the cow happily munches on hay, unaware of the international stir she has caused.

The cow from the Bulgarian village of Kopilovtsi has won fame and Europe-wide support since she wandered into neighboring Serbia for two weeks last month and authorities threatened to put her down on her return.

Bulgaria is a European Union member, Serbia isn't. EU rules state that any animal entering the bloc from the outside must have proper veterinary approvals and Penka didn't, so she faced a death sentence.

But after the outcry — pro-Penka campaigners included former Beatle Sir Paul McCartney — authorities ran tests on Penka that proved she was healthy.

"Laboratory analyses of the cow that spent 15 days in Serbia and crossed the border back (into Bulgaria) are negative for all the tested diseases," Bulgaria's Food Safety Agency announced Monday.

"She will not be killed and will return to her herd by the end of the week," agency spokeswoman Ekaterina Stoilova confirmed to AFP.

"So many people saw our story and expressed their support," owner Raina Georgieva said this week. "I believed that there would be mercy for our Penka."

Nonetheless, Penka has been confined to a separate quarantine box in the village waiting for the authorities to allow her to join the rest of the herd.

Georgieva said she and her husband got Penka only several months ago and were worried how the tests would come out.

"It turned out she is absolutely healthy," Georgieva smiled.

Thousands of people have signed a petition to save Penka and her case was discussed during a European Commission daily briefing. McCartney wrote on Twitter: "She's done nothing wrong.

Penka's plight went viral on social media and made headlines around the world after her owner Ivan Haralampiev, from the western village of Kopilovtsi, launched an appeal 10 days ago to save her.

The animal had wandered away from her herd near the western Bulgarian village of Mazarachevo on May 12 and spent more than two weeks in Serbia before local farmers identified her from her earmarks.

Penka then fell afoul of strict EU rules on the import of live animals from third countries, which require extensive paperwork giving the animal a clean bill of health before it can enter the bloc.

Haralampiev lacked the necessary documents to authorize her return and was only allowed to take her back if he agreed to put her down within days.

But instead he launched an appeal on television to save her, sparking a worldwide outpouring of sympathy.

By Monday more than 30,750 people had signed an online petition to save Penka addressed to EU institutions. Penka's received attention particularly in Britain where eurosceptic campaigners and publications held her up as a victim of Brussels bureaucracy.

Penka's fans shared her story with the hashtag #SavePenka and even wrote a poem describing her odyssey.

"I read the moos today oh boy! HUGE HUGE HUGE PENKA NEWS. SHE WILL LIVE!!!!!!!!!," tweeted James Crisp, a journalist with Britain's Daily Telegraph newspaper, mangling one of the Beatles' best known songs as he celebrated the announcement.

Animal rights group Four Paws said there were many more Penkas out there as dozens of stray animals crossed in and out of the European Union on a daily basis.

"It will be really cruel to kill all those animals. I do hope that if there is a gap in European legislation, Penka's case will help to solve this issue," said group spokesman Yavor Gechev.

Haralampiev told Bulgarian media on Monday that he was very grateful "to all the people from across the world who stood up for my poor animal".

"You have no idea how much stress this cost me but it was worth it," Haralampiev said, adding that he was looking forward to an emotional reunion.

Penka would have "luxury fodder" and "lots of caresses" to look forward to and had become "very special" for the family, he said.

Penka was even discussed during the European Commission's daily briefing on Friday with climate spokesperson Anna-Kaisa Itkonen answering extensive questions from journalists regarding the cow's situation.

Bulgarian food safety authorities say it is not an isolated case, with animals from Serbia and Macedonia often entering Bulgarian territory, and they are holding talks with the neighboring countries to resolve the issue.