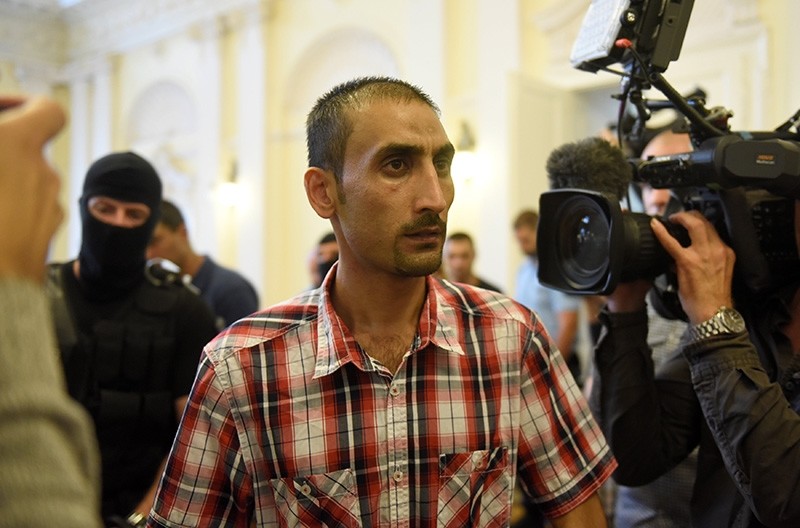 The Afghan leader of a people-smuggling group looks at the media, as he leaves the courtroom, after a guilty verdict in Kecskemet, Hungary, June 14, 2018. (Reuters Photo)
by Associated Press Jun 14, 2018 12:00 am

A Hungarian court on Thursday sentenced four human traffickers to 25 years in prison each for their roles in the 2015 case in which 71 migrants suffocated to death in the back of a refrigerated truck found on a highway in Austria.

The principal defendant, an Afghan man, and three Bulgarian accomplices, were found guilty in the southern city of Kecskemet of being part of a criminal organization and committing multiple crimes, including human smuggling and murder.

Ten other defendants, mostly Bulgarians, were given prison terms ranging between three and 12 years. Three of the men convicted are fugitives.

In France, meanwhile, President Emmanuel Macron's office confirmed that he will host Italian Premier Giuseppe Conte on Friday amid an escalating dispute between the two countries over migration. The Elysee said that Macron and Conte spoke by phone on Wednesday.

Italy had demanded an apology after the French president accused its new populist Italian government of irresponsible behavior for refusing to allow a rescue ship carrying 629 migrants to dock at an Italian port.

Macron said he "had not made any comment intended to offend Italy and the Italian people," the statement said.

Conte said the chat with Macron had been "very cordial" and confirmed Friday's meeting in Paris.

Spain on Monday announced it would allow the 629 migrants to dock at the port of Valencia, where they are expected Sunday morning. Bad weather has forced the convoy of ships now carrying them to take a detour after high waves caused some of the exhausted migrants aboard to be seasick.

The migrants are traveling from the central Mediterranean Sea aboard the Aquarius, a rescue vessel operated by aid group SOS Mediterranee, and two boats of the Italian government.

Spanish deputy Prime Minister Carmen Calvo said authorities would examine case by case if the migrants qualify for asylum according to the country's regulations. Calvo said minors and women were a priority, especially those who may have been trafficked or exploited in their attempts to reach Europe.

In the aftermath of a separate rescue in waters off Libya, the U.S. Navy said it was still awaiting a decision on where it could disembark 40 African migrants it rescued at sea after a smugglers' boat capsized on Tuesday.

Lt. Cmdr. Zachary Harrell, a spokesman for the U.S. 6th Fleet, said the survivors aboard the Trenton, a support ship, included four minors and came from countries including Sudan, South Sudan, Nigeria and the Central African Republic. Navy rescuers also spotted 12 "not responsive" persons in the sea, but they were unable to retrieve any bodies.

The Trenton initially had asked a private rescue ship off Libya, the Sea Watch-3, if it would take aboard the survivors. But Sea Watch, wary of embarking on an odyssey similar to what befell the Aquarius, said it couldn't unless the Rome-based rescue coordination center assigned it a safe port within navigation distance.

That didn't happen, so the 40 survivors stayed aboard the Navy vessel.

In the Hungarian case, 59 men, eight women and four children from Syria, Iraq and Afghanistan suffocated in the back of a refrigerated truck with Hungarian license plates. The truck was found abandoned in the emergency lane of a highway near Parndorf, Austria, near the Hungarian border, on Aug. 27, 2015.

The migrants had boarded that truck near the village of Morahalom, at Hungary's southern border with Serbia, before heading toward Austria. According to prosecutors, who had requested life sentences for the four main defendants, the 71 victims "suffocated in horrendous conditions three hours after the departure," while still in Hungary.

Prosecutor Gabor Schmidt said he would appeal the sentences, saying they are too lenient.

"The only sentence capable of achieving the aims of the penalty for these defendants is the sentence of life in prison," Schmidt said after the court session, referring to the main defendants.

D. Mihaly Irinkov, defense lawyer for one of the main defendants who drove a vehicle escorting the truck carrying the migrants, said he would ask for acquittal in the murder conviction and for a shorter sentence regarding the other counts.

Some 400,000 migrants and refugees passed through Hungary in 2015 on their way to Germany and other destinations in Western Europe. The migrant flow was diverted and slowed by razor-wire fences that Hungary built on its southern borders late that year by Prime Minister Viktor Orban's government. Orban, who was re-elected to his third consecutive term in April, had based his campaign on his fierce anti-migrant policies.

Orban has welcomed the election of the new, populist government in Italy, which has also pledged to oppose migration and has talked about expelling tens of thousands of migrants from the country.

For his part, Pope Francis called Thursday for a multinational response to illegal migration because the problem often "exceeds the capacities and resources" of individual countries.

Francis' message didn't refer to the France-Italy dispute, but he echoed Italy's longstanding complaint that it has largely been left alone to cope with the hundreds of thousands of migrants who have landed on its Mediterranean shores in recent years.