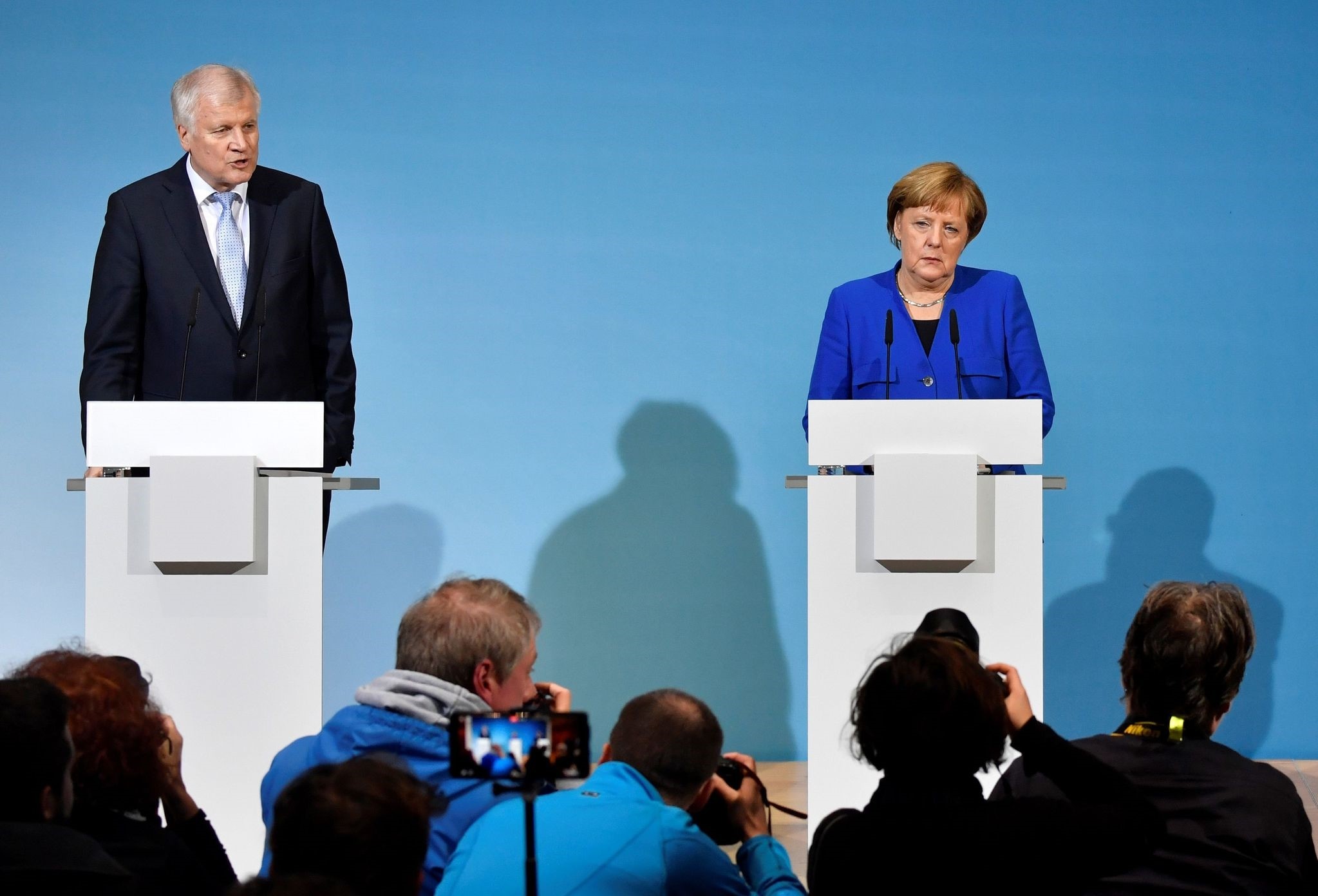 State Premier for the state of Bavaria and leader of the Christian Social Union (CSU) Horst Seehofer and German Chancellor Angela Merkel attend a press conference after talks to form a new government, Berlin, Jan. 12.
by Compiled from Wire Services Jun 15, 2018 12:00 am

Germany's new government has yet to hit the 100-day mark, but a showdown over migration in Chancellor Angela Merkel's coalition threatens to widen divides within the bloc and fuel Euroscepticism abroad. The spat is the latest in a long-standing feud over asylum seekers that splits Merkel's conservative bloc, made up of the Christian Democrats (CDU) and its more conservative Bavarian ally, the Christian Social Union (CSU).

Chancellor Angela Merkel's Bavarian allies are considering breaking up their parliamentary bloc with her Christian Democratic Union (CDU), a senior lawmaker with the Bavarian CSU told the Augsburger Allgemeine newspaper. "We're not far off a break," the paper quoted the unnamed lawmaker as saying, according to Reuters.

Merkel is facing a rebellion from her hardline Interior Minister Horst Seehofer, who demands that German border police be given the right to turn back migrants without identity papers or who are already registered elsewhere in the European Union.

The veteran chancellor fears that such a move would be seen in the EU as Germany going it alone and hurt over-burdened frontline Mediterranean countries such as Italy and Greece, and has urged a negotiated EU response instead.

Merkel, the longest-serving EU leader, called immigration "a litmus test for the future of Europe" on Wednesday, but the issue has now rapidly turned into a test of Merkel's own grip on power at home.

The top-selling Bild daily argued that "if no agreement is reached, Angela Merkel must face a vote of confidence and every lawmaker must decide ... Keep going with Merkel's way or face an adventure called fresh elections."

Seehofer, from Bavaria state's CSU party, has long been harshly critical of Merkel's decision to open German borders in mid-2015 to a mass influx of over 1 million asylum seekers since.

His new "migration master plan," which he wanted to present this week, foresees turning away asylum-seekers at Germany's border if they entered the EU from another member state and first registered there.

Merkel has repeatedly rejected unilateral steps by EU member states to stop illegal migration, and called for an EU-wide common asylum policy to address the refugee crisis. She also urged other EU member states to share the burden of Italy and Greece, which receive the largest number of refugees in the 28-member bloc.

All this comes as several of the larger EU economies – Italy, Spain and France – spar over the fate of a migrant boat stopped from docking by Italy's new Eurosceptic government, and taken in by Spain.

"Whether we solve illegal migration within the European Union could possibly become the fateful question for Europe's solidarity," Merkel said at an annual integration summit on Wednesday.

Perceived by many as the most powerful figure within the EU, Merkel could be labelled a hypocrite if Germany strikes out on its own.

For Seehofer, adopting a strong stance on migration is politically crucial as he and the CSU gear up for state elections in Bavaria set for Oct. 14.

After losing some support to right-wing populists in the 2017 federal election, the CSU is keen to prove that it can deliver on its promise of a more hardline approach.

Recent events in Germany – including revelations that some 1,200 people may have been improperly granted asylum, and the murder of a 14-year-old girl blamed on an Iraqi refugee – have only fueled public demands for swift reform to asylum policy.