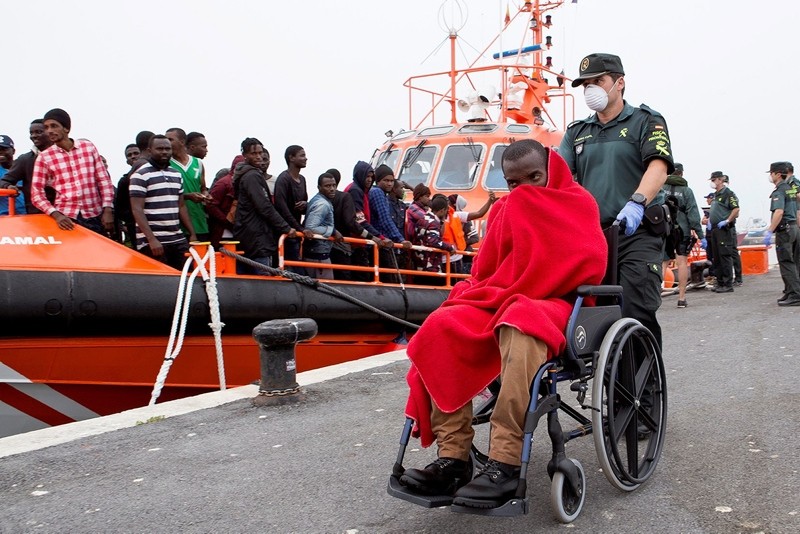 The EU is considering setting up "disembarkation platforms" outside the bloc to process migrants, according to draft summit conclusions seen Tuesday by AFP, as Brussels tries to solve a political crisis over immigration.

European Union leaders meeting in Brussels next week will be asked to approve the creation of centers to assess migrants trying to reach the bloc and decide which are refugees in need of protection and which are economic migrants who should be returned to their home countries.

Immigration looks set to dominate the June 28 and 29 gathering, after Italy's new right-wing government refused to accept a boatload of migrants rescued from the Mediterranean and hardliners in German Chancellor Angela Merkel's coalition gave her an ultimatum to get tough on the issue.

"The European Council supports the development of the concept of regional disembarkation platforms in close cooperation with UNHCR and IOM," the draft conclusions seen by AFP say, referring to the United Nations refugee agency and the International Organisation for Migration.

"Such platforms should provide for rapid processing to distinguish between economic migrants and those in need of international protection, and reduce the incentive to embark on perilous journeys."

The conclusions were drawn up by European Council President Donald Tusk in cooperation with Bulgaria, which holds the rotating EU presidency, and European Commission President Jean-Claude Juncker and would need unanimous approval by all 28 member states.

EU leaders are due to discuss migration at a summit next week, amid stalled efforts to improve the bloc's asylum system.

The disembarkation platforms would be located outside the European Union, according to an EU diplomat, who called the proposal a "potential game-changer," as it would reduce the incentive for migrants to attempt to cross the Mediterranean Sea.

The migration flow across the Mediterranean is less than half as strong as it was one year ago, IOM said in Geneva on Tuesday.

Between January and mid-June, some 40,000 people took this route to Europe, according to the U.N. organization.

The number of migrants who have died in the Mediterranean so far this year has reached 857, compared to around 2,000 in the same period last year.

EU Migration Commissioner Dimitris Avramopoulos poured cold water on the proposal, amid media reports that such a migrant camp could be set up in the southern European country of Albania.

"Do you know any country - and if you do please name it - that has expressed the wish that it's very willing to host such camps?" he asked a journalist who confronted him on the issue.

"No discussion took place about setting up camps in Albania or anywhere else in Europe," Avramopoulos added, following talks on Tuesday with interior ministers from Western Balkan countries.

The draft summit statement further calls for the establishment of an EU fund to help stem illegal migration and pledges to ramp up support for the Libyan coastguard and local communities to prevent people departing from the poorly governed northern African country.

Tusk is engaged in a flurry of diplomacy ahead of the June 28-29 summit, with visits to Sweden, Spain, Italy, Austria, Hungary and Germany planned this week and next.

His draft summit document - which also includes draft conclusions on security and defense, the economy and other issues - is currently being discussed among the EU's 28 member states.