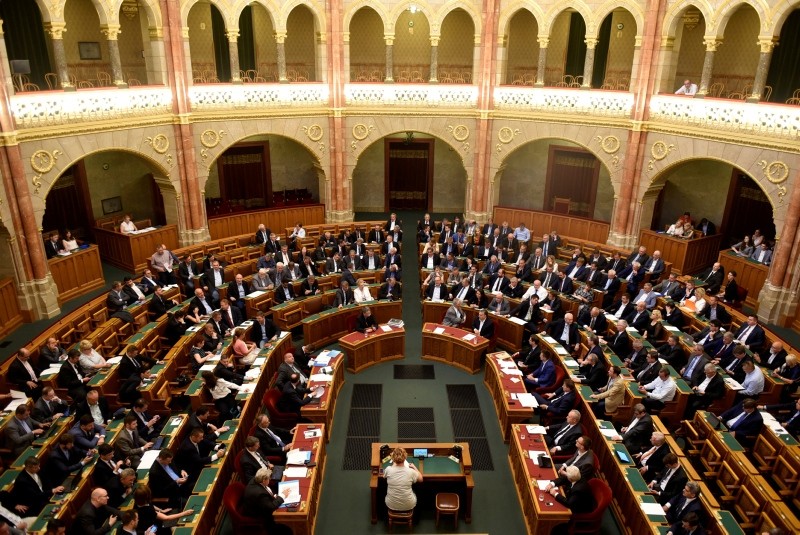 Members of the Hungarian government vote on the 'Stop Soros' package of bills that criminalises some help given to illegal immigrants, at the Parliament in Budapest, Hungary, June 20, 2018. (Reuters Photo)
by Compiled from Wire Services Jun 20, 2018 12:00 am

Hungarian lawmakers voted to tighten the country's asylum eligibility rules and threatened Wednesday to incarcerate people who help asylum-seekers, votes that coincided with a United Nations' observance dedicated to refugees.

The approved changes include a constitutional amendment making it more difficult for refugees to qualify for asylum depending on how they reached Hungary. For example, asylum-seekers' claims will be rejected if they traveled through countries where they were not persecuted or at risk of persecution.

The criteria would make it possible to turn back Syrian refugees who cross into Hungary from Serbia, like most now do after following a route through the Balkan region to western Europe.

The amendment passed on a 159-5 vote, with lawmakers from Prime Minister Viktor Orban's Fidesz party, a small ally party and the nationalist Jobbik party all in support.

The National Assembly also voted 160-18 to pass the so-called "Stop Soros" law, which allows criminal penalties of up to a year in prison for those convicted of aiding asylum-seekers. Orban blames financier George Soros and civic groups he supports for encouraging mass migration to Europe, charges they deny.

The law applies to "the promotion of illegal immigration" and would criminalize acts such as distributing informational leaflets or organizing "border observation."

"The Stop Soros bill and the constitutional amendment vindicate the will of the Hungarian people, entailing a new, strong protection for the country against illegal migration," Orban's office said after the votes.

Orban has become an unrelenting opponent of immigration, especially by the Muslims he repeatedly calls a threat to Christian Europe. He was elected in April to a third consecutive term, his fourth overall, after campaigning almost exclusively on an anti-migration platform.

Migrants, asylum-seekers and refugees, even those Hungary recognizes as deserving protection, already have been affected by Orban's uncompromising policies. His government has greatly restricted benefits and assistance for people escaping persecution or violence who hope to settle in Hungary.

One of the civic groups targeted by the "Stop Soros" bill is the Hungarian Helsinki Committee, which receives some of its funding from Soros.

Hungary passed the Stop Soros law despite calls from the Council of Europe to wait for an opinion on the legislation experts on its Venice Commission plan to issue Friday. A separate proposal by the Hungarian Finance Ministry would impose a 25 percent "special tax on immigration" on the revenues of civic groups assisting asylum seekers and refugees.

Amnesty International, which could find itself targeted under the new laws, called the new laws "draconian" and "a brazen attack on people seeking safe haven from persecution and those who carry out admirable work to help them."

"It is a new low point in an intensifying crackdown on civil society and it is something we will resist every step of the way," Amnesty said in a statement.

The amendment included articles unrelated to migration that also legalize long-desired government initiatives. These include a ban on homelessness, the creation of new courts to handle public administration cases, new rules which critics fear will be used to limits protests and an obligation for the Hungarian state to "defend" the country's Christian culture.

Meanwhile, the leaders of ten EU countries including Germany and France will hold crisis talks on migration in Brussels on Sunday to try to find answers ahead of a major summit next week.

The leaders of frontline states Italy and Greece will also be involved, as well as Austria and Bulgaria, who are the incoming and outgoing holders of the EU's rotating six-month presidency, European sources