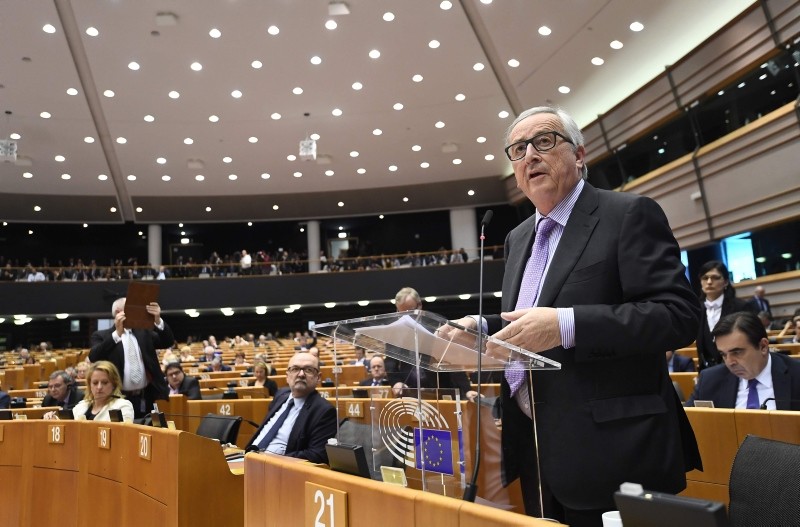 European Commission President Jean-Claude Juncker presents the EU's next long-term budget, at the European Parliament in Brussels, Belgium, May 2, 2018. (REUTERS Photo)
by Jun 20, 2018 12:00 am

Several key EU leaders will hold special talks on migration in Brussels on Sunday to try to find answers ahead of a major summit next week, European Commission President Jean-Claude Juncker said.

The leaders of Germany, France, Italy, Spain, Greece, Austria and Bulgaria will be involved in what Juncker called an "informal working meeting", European sources told AFP, while Malta's prime minister said he had also accepted an invitation from Juncker.

The issue of migration is causing fresh divisions in Europe, with German Chancellor Angela Merkel's domestic coalition under threat and following a row over a boatload of migrants rescued from the Mediterranean who were turned away by Italy's new right-wing government.

"I am convening an informal working meeting on migration and asylum issues in Brussels on Sunday, in order to work with a group of Heads of State or Government of Member States interested in finding European solutions ahead of the upcoming #EUCO (European Council)," Juncker said on Twitter Wednesday.

All 28 European Union leaders are due at their full summit next Thursday to discuss plans to overhaul the bloc's asylum system, which has been under severe pressure since the migration crisis exploded in 2015.

But efforts to reach a consensus have been thrown into turmoil by fresh developments in Europe as countries disagree over who should host new arrivals.

After allowing in more than one million asylum seekers into Germany since 2015, sparking a strong backlash against immigration, Merkel is now fighting for her political future.

Her hardline interior minister Horst Seehofer on Monday gave her a two-week ultimatum to reach EU deals with already heavily burdened EU frontline states such as Italy and Greece to allow Germany to turn back asylum seekers who previously registered in another member country.