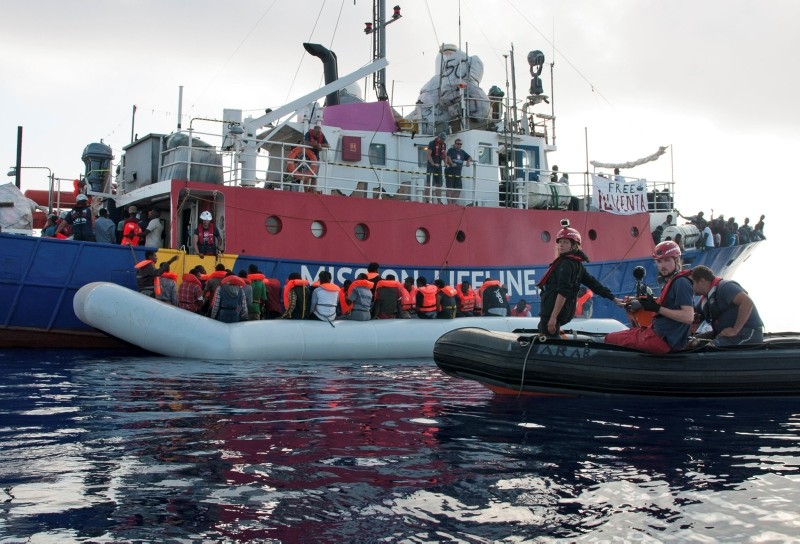 In this photo taken on Thursday, June 21, 2018, the ship operated by the German NGO Mission Lifeline rescues migrants from a rubber boat in the Mediterranean Sea in front of the Libyan coast. (AP Photo)
by Compiled from Wire Services Jun 22, 2018 12:00 am

Italy's populist, anti-migrant interior minister said Friday that Malta should allow a Dutch-flagged rescue ship carrying hundreds of migrants rescued from rubber dinghies off the Libyan coast to make port there because the ship is now in Maltese waters.

"We ask humanly and politically that Malta finally opens one of its ports and lets these desperate people disembark," and then seize the ship, Salvini said.

Malta responded that it would "act according to the laws and applicable conventions," without further explanation. International law states that Malta must respond if they are the nearest safe port at rescue or if requested by the ship's captain.

The dynamic is similar to the standoff over the Aquarius, operated by French aid groups, which eventually sailed an additional 1,500 kilometers (900 miles) last week to deliver 630 migrants to Spain after both Malta and Italy refused to let the rescue ship access their ports. Salvini is making good on an election promise to go after rescue ships run by aid groups, which he has likened to taxi services that help the migrant smugglers.

Salvini on Thursday said he would not allow the ship operated by the German NGO Mission Lifeline to enter Italian ports, saying that it had acted improperly by taking on board the 224 migrants that the Italian coast guard had assigned to the Libyan coast guard to rescue. Salvini said the rescue was in Libyan waters, which Lifeline denies.

Mission Lifeline said Friday that it still has not been assigned a port, despite its requests. It said it picked up additional migrant passengers during another rescue overnight, and currently was heading north with 234 on board. It said it had responded to a request for help by a merchant vessel to help rescue 113 people.

Lifeline referred to reports that as many as 220 people were missing at sea and presumed drowned, according to survivor statements to the U.N. Refugee agency.

"The latest drownings show how important our sea rescue efforts are, and that not a single rescue ship can be missed," said Mission Lifeline founder Axel Steier. "The rescue of human lives must be prioritized before border control."

Malta, a small island nation, has not taken in large numbers of people rescued at sea, while Italy has seen 650,000 arrivals since 2014.

On Friday, Malta had not received a call for help from the ship, Lifeline, or from Italy's coastguard, Maltese government sources said. Lifeline was sailing about half way between Tripoli and Malta early on Friday.

"Malta cannot back out," Transport Minister Danilo Toninelli, who oversees the coastguard, said. The European Union's border control agency Frontex "will make an official request to Malta to open its ports", he said.

On Thursday, Toninelli said the Italian coastguard would pick up the 224 migrants, including 14 women and four small children, from Lifeline because it was too dangerous for the 32-meter vessel to travel to the Netherlands with so many on board.

He said the coastguard would escort Lifeline to an Italian port, where it would be impounded pending an investigation into its flag status after the Dutch government denied responsibility for the vessel.

"There is no need for the Italian government to seize the ship for investigations," Steier said in a statement. "No port of safety was assigned so far," Steier added. "We call out to the European community, might it be on national or local level, to help find a solution."

While the number of sea arrivals to Italy has dropped dramatically this year - more than 77 percent from last year - the new government has thrust immigration to the top of the EU's agenda ahead of a summit of leaders next week.

Italy's government, sworn in earlier this month after promising to raise its voice on immigration in Brussels, has sparred with France, Malta and Germany ahead of the meeting.

An SWG poll this week showed two-thirds of Italians agree humanitarian boats should not be allowed in the country's ports.

But off the Libyan coast, where people smugglers operate with impunity, the U.N. refugee agency said an estimated 220 migrants drowned this week. The death toll in the central Mediterranean this year is nearing 1,000, the UNHCR said.