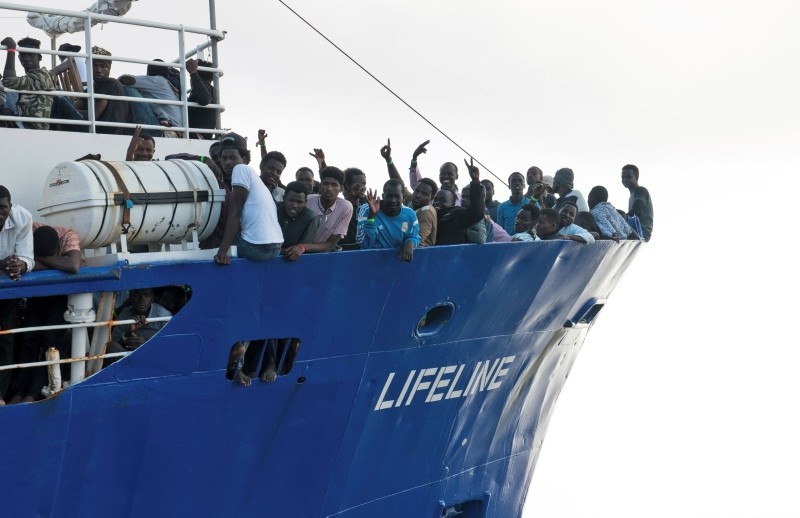 The warning came as German non-governmental organization Mission Lifeline has been waiting since Thursday to be allowed to disembark more than 230 people on board its vessel.

"[I want to] reiterate that these ships can forget reaching Italy: I want to cut off the business of traffickers and mobsters!" Salvini wrote on Facebook.

He said the ban also applied to Proactiva Open Arms, SOS Mediterranee, Sea-Watch and Sea-Eye, whose vessels are either at sea or in Maltese ports.

Salvini, who leads the far-right League party, has long accused NGOs of profiting from migrant rescues and of being in cahoots with human traffickers. The accusation is unproven, and strongly denied by NGOs.

"It is unacceptable that again political statements are made at the expense of people in maritime distress and in direct violation of applicable guidelines," Mission Lifeline said in a statement.

The German NGO said there were also 113 rescued migrants on board a Danish cargo ship, the Alexander Maersk, waiting for a place to disembark.

The migrants are "okay, given the circumstances," a spokesman for shipper Maersk Line, Mikkel Linnet, separately told dpa, adding that the cargo was currently off the coast of Sicily.

The migrants were picked up on Friday on instructions by the Italian coastguard, the spokesman said. Mission Lifeline said on Twitter it helped with the rescue.

The NGO also said the two other German charities, Sea-Eye and Sea-Watch, were helping "to keep the situation stable" on its stranded Lifeline vessel, by sending in another boat with supplies.

Italy closed its ports to the Lifeline on Thursday, after accusing it of dodging Italian coastguard orders to leave it to the Libyan coastguard to save the migrants it spotted at sea.

The Rome government said the Lifeline would be impounded and its crew arrested if it decided to proceed to Italy anyway. The ship has since stayed in Maltese search and rescue waters.

"Italy was right to say the boat disobeyed the instructions to hand over the operation to the Libyan coastguard," Maltese Prime Minister Joseph Muscat said in a domestic radio interview.

"But [Italy] was wrong to tell [the Lifeline] to head to Malta instead. We're a sovereign country and nobody should dictate what we can and cannot do," he added.

On Twitter, Muscat also told the Lifeline to leave Maltese waters "to prevent escalation," and said a single medical evacuation from the boat had been canceled because the NGO told Malta there was no need.

Malta and Italy had a similar spat earlier this month over the Aquarius, the first NGO ship to be told by Rome's new populist government to take its rescued migrants elsewhere.

The affair sparked a Europe-wide crisis and put migration at the top of the agenda of next week's EU summit, to be preceded on Sunday by a meeting of several EU leaders.

The Aquarius' more than 600 migrants were eventually taken to Spain with an escort of Italian navy and coastguard ships. On Friday, Spain said it could offer help also to Mission Lifeline.

"SOS Mediterranee would welcome any EU-wide plan to put together all available capacities for a safe and prompt disembarkation of people rescued in the Central Mediterranean," the charity said.