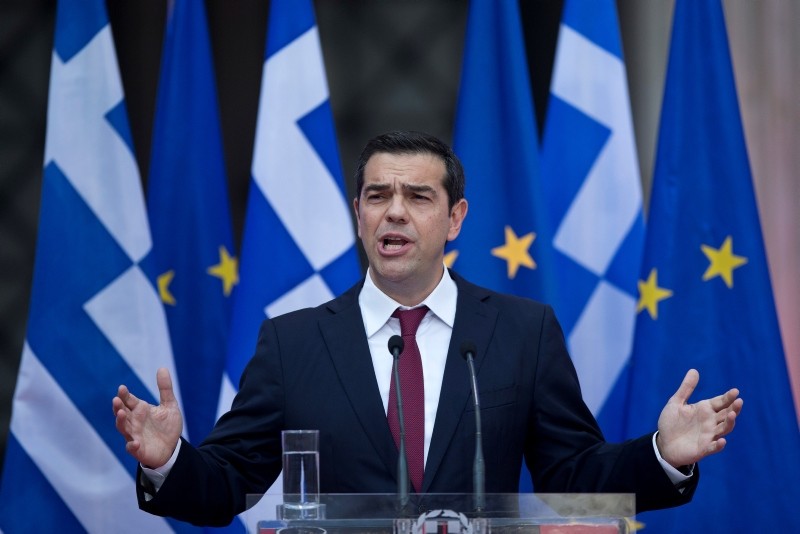 Greek Prime Minister Alexis Tsipras speaks to lawmakers from his left-led governing coalition in Athens, wearing a tie for the first time in more than three years, on Friday, June 22, 2018. (AP Photo)
by Associated Press Jun 23, 2018 12:00 am

For once sporting a necktie, Greek Prime Minister Alexis Tsipras on Friday pledged to tread the path of fiscal prudence after international creditors announced new debt relief measures to wean his country off its eight-year bailout program.

Tsipras said the deal hammered out early Friday in Luxembourg was a historic milestone for his austerity-battered country, whose third — and last — bailout deal runs out two months from now.

"Greece is once again becoming a normal country, regaining its political and financial independence," Tsipras told a gathering of the 153 lawmakers in his left-led governing coalition in Athens.

Greek bond markets rose on the news of the deal, leading to a drop in the government's borrowing rates. The yield on Greece's benchmark 10-year bond eased 0.2 percentage points to 4.1 percent. The main stock index opened more than 2 percent up, but closed the day marginally down.

"Our great challenge is not to return to fiscal derailment but to prove that we can manage things on our own," Tsipras told the lawmakers.

For the only time since he first assumed office in January 2015, Tsipras donned a tie — a burgundy affair worn with a white shirt and blue suit. It sat slightly askew, and he ostentatiously removed it at the end of his speech.

The left-wing politician eschews neckties, while otherwise conforming to the dress code of international leaders. He said soon after being elected that he would only wear one when Greece had settled its debt problems.

Over the following three years, he received several ties from the more playful of his foreign colleagues.

The agreement concluded by finance ministers from fellow members of the 19-member eurozone grants Greece a ten-year extension in repaying a large chunk of its crippling debt load.

And it provides the country with enough ready cash to coast it over nearly two more years, without having to resort to expensive international bond markets after bailout loans run out in August.

But it also means Tsipras' government will have to stick to austerity measures and reforms, including high budget surpluses, for more than 40 years. Greece will be monitored on a quarterly basis, echoing the supervision of the bailout years.

Earlier Friday, Tsipras said the measures render Greece's debt sustainable, exceed market expectations and repay a "moral debt" to the Greek people for its long suffering during the financial crisis.

"But this does not mean that we must abandon the prudent path of fiscal balance and structural reforms that the country needs," he added. "It means, however, that we are leaving the thorny path of austerity."

"From now on we have targets and we commit to observe them, but it is at the discretion of each Greek government to select the means for achieving these targets," Tsipras said.

"I think it is the end of the Greek crisis," Tsakalotos said in Luxembourg early Friday. "We believe the debt is now sustainable and we will be able to tap markets."

Greece's ability to finance itself after the end of its third bailout was a key concern. The country has issued bonds three times since the beginning of the bailout, twice within the last year. But investors charged high rates to lend Greece the money.

Under Friday's decision, Greece will receive a final 15 billion-euro ($17 billion) bailout loan installment, 9.5 billion of which will shore up an existing cash kitty to keep the country afloat post-bailout.

This, Greek officials said, might even be used to pay off the country's debts to the IMF earlier than planned.

Including previous loans and financing Greece is drawing on, eurozone officials said the country will have a buffer of 24.1 billion euros that cover its financial needs for about 22 months after the end of the program.

On the other hand, Greece must achieve ambitious primary budget surpluses — that is, surpluses that exclude the cost of debt servicing — of 3.5 percent until 2022, and an average 2.2 percent from then to 2060.

"Obviously we would have been much happier with a lower fiscal surplus," Tsakalotos said. "We think it's a tough requirement but you have to take the whole package as one."