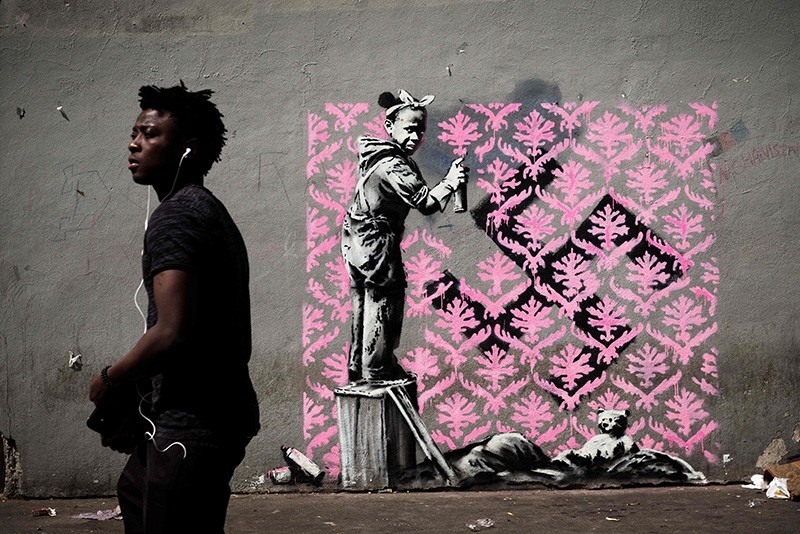 The mysterious British street artist Banksy appears to have taken aim at the French government's crackdown on migrants in a series of new murals in Paris.

The world's best-known graffiti painter apparently "blitzed" the French capital over the last few days, leaving as many as six works on walls across the city.

None of the works were signed -- as has been Banksy's wont in recent years -- but experts told AFP that they look genuine.

The most political takes issue with France's tough anti-migrant policy, with nearly 40 makeshift camps razed in Paris in the last three years and President Emmanuel Macron determined that the city does not become a magnet for refugees.

In the mural a young black girl sprays a pink wallpaper pattern over a swastika on a wall next to her sleeping bag and teddy bear in an attempt to make her patch of pavement more cozy.

The image is on a wall in northern Paris next to an official refugee shelter which was controversially closed in March despite protests from the city's Socialist mayor Anne Hidalgo.

Since then around 2,000 migrants, including children and teenagers, have been sleeping rough along canals and under motorway bridges.

Migrants were still sleeping next to the mural on Sunday.

Banksy, a long-time supporter of the refugee cause, has not yet confirmed the works are his.

However, he has often traveled to make powerful political points with his art about everything from Brexit to the fate of the Palestinians.

In 2015, he painted a mural on the edge of the Calais "jungle" camp built by migrants trying to get to Britain, which has since been razed by the authorities.

"The Son of a Migrant from Syria" depicted Apple co-founder Steve Jobs -- who was of Syrian descent -- carrying a knapsack and an Apple computer.

He sprayed another, his take on Gericault's "The Raft of the Medusa", on the wall of a house in the northern French port -- a reference to the shipwrecked hopes of migrants trying to cross the English Channel.

Art historian and street art expert Paul Ardenne told AFP that the Paris murals were very much in Banksy's style.

"The color, the line, the subject and the way he has adapted the images from photos ... all point to them being Banksy's style. There is a very particular signature. If (the mural of the girl) is not by Banksy, it is a very good copy," he said. 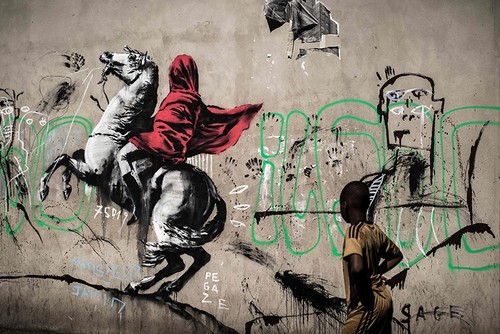 Another of the new works appears to touch on the equally sensitive subject of the ban on the niqab in France. It shows Napoleon rearing his horse as he crosses the Alps to invade Italy in 1800, his face and body wrapped in his red cloak.

The pastiche of David's canvass, one of the most iconic in French 19th-century art, appeared on a wall in an ethnically-mixed district of northern Paris.

Others, however, have seen it as a metaphor for a lack of political leadership, the general blinded by his own hubris. 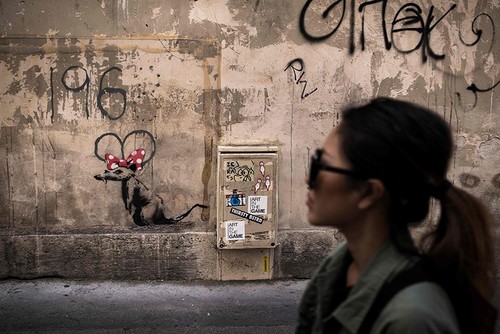 And a third image near the Sorbonne university on the Left Bank -- which was rocked by a student uprising 50 years ago -- appeared to be a dig at the death of French revolutionary spirit.

One of Banksy's trademark rats -- his avatar for wronged ordinary people -- sits under the legend "May 1968" wearing a Minnie Mouse bow. The Disneyland Paris theme park just outside the French capital is now one of its biggest employers. 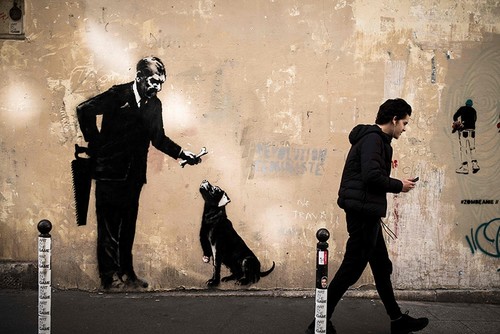 A fourth mural nearby took a swipe at politicians and business leaders. A man in a suit offers a dog a bone having first sawn the animal's leg off.

Two more Banksy rats appear in further images discovered this weekend, one dynamiting a road sign and another riding a popped cork from a champagne bottle.

Ardenne said it does not matter if the murals are by Banksy, but they do "show that the Banksy effect, and its ability to manipulate the media, works," he argued.

"We will look at them far more now thinking they are by Banksy rather than if it had been by any old artist," he added.

Banksy's apparent visit to Paris comes as another street art star who has also become an art world darling unveiled his latest creation in the French capital.

KAWS, aka American Brian Donnelly, made a 10-meter (33-feet) high statue of the French fashion legend Christian Dior with 70,000 flowers as the centerpiece of his erstwhile label's Paris men's fashion week show on Saturday.