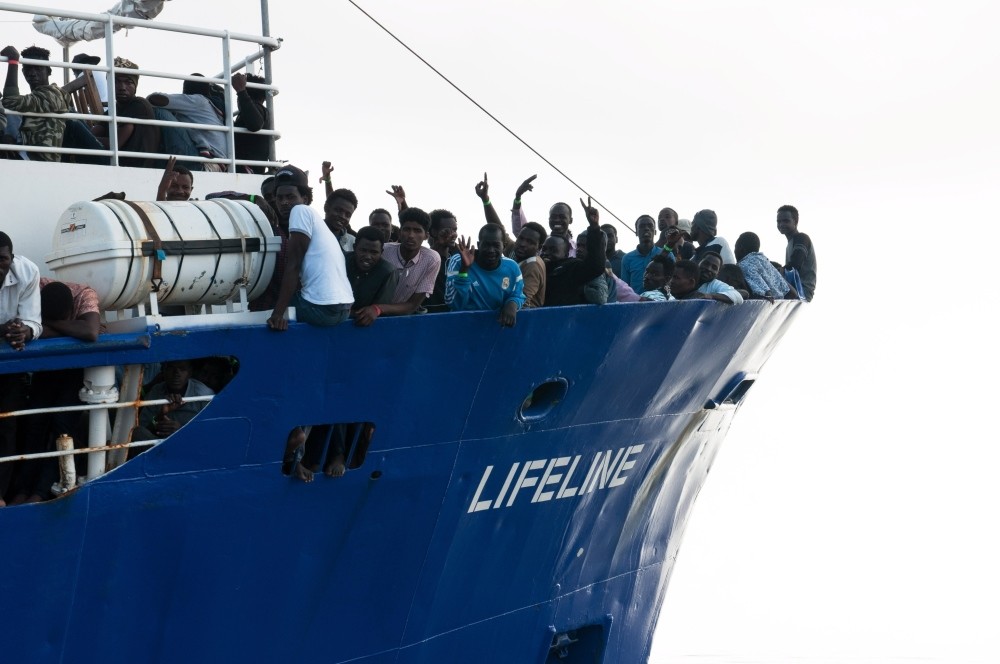 Malta and Italy have both refused to take in the Dutch-flagged vessel Lifeline which rescued over 230 migrants at sea, June 21.
by Compiled from Wire Services Jun 25, 2018 12:00 am

With another migrant rescue ship stranded in the Mediterranean and both Italy and Malta once again refusing to let it dock, migration row festers ahead the EU mini-summit

Italy criticized Malta yesterday over its refusal to take in the Dutch-flagged MV Lifeline ahead of a meeting of European Union leaders in Brussels over the dispute on migration.

Italian Transport Minister Danilo Toninelli criticized Malta on his Facebook page, where he also posted a copy of an official note from Malta saying it would not intervene except to offer emergency services in a few cases.

Italy's new populist government has thrust migration back onto the European Union agenda and Interior Minister Matteo Salvini has pledged to no longer let ships offload rescued migrants in the country.

Toninelli said the Lifeline, with over 230 migrants on board, was stationary in the SAR (Search and Rescue) waters off Malta, adding no other country was coordinating operations meaning Malta's responsibilities were greater still.

Malta has previously said the country is not the competent authority because initial SAR operations were done by Libya and the ship breached obligations to oblige by Libyan instructions.

"The inhumanity of Malta is the mirror of Europe's attitude," Toninelli said, Reuters reported.

At the heart of the problem lie deep divisions over who should take responsibility for arriving migrants — often Mediterranean countries like Italy, Greece and increasingly Spain — how long they should be required to accommodate them, and what should be done to help those EU countries hardest hit.

The problem was crystalized last week in a row between Italy's new populist government, Malta and France over who should take responsibility for 630 people rescued from the Mediterranean Sea off the coast of Libya, the main departure point for people trying to reach Europe.

Amid the mud-slinging, Spain's new Socialist government agreed to take charge of the migrants and the ship eventually made a weeklong voyage to Valencia.

The rhetoric ahead of the Sunday summit extended north, with Austrian Chancellor Sebastian Kurz saying his country would reintroduce controls on its border with Italy if neighboring Germany were to turn back migrants at its border to Austria.

Like everything to do with migrants in Europe lately, even this meeting is proving controversial. What started as talks between half a dozen leaders now involves at least 16, as others demanded to take part. Four countries in Eastern Europe — the Czech Republic, Hungary, Poland and Slovakia — have refused to attend and reject taking in migrants in general.

Referring to hasty arrangements and a domestic crisis over migration policies within Germany's coalition government, the fervently anti-migrant Hungarian Prime Minister, Viktor Orban, said: "We understand that countries have domestic political difficulties, but this can't result in pan-European confusion."

"This is an open invitation. Nobody is excluded, everybody is invited. Nobody is forced to attend either," said Alexander Winterstein, spokesman for the European Commission, where the talks will take place.

With plans to reform Europe's asylum laws bogged down, EU leaders hope to stop migrants leaving North Africa by paying countries like Algeria, Egypt, Libya, Morocco and Tunisia to hold people until their eligibility for asylum can be established.

French President Emmanuel Macron said, after meeting Saturday with new Spanish Prime Minister Pedro Sanchez in Paris, that both France and Spain want migrants arriving in Europe to be placed in "closed centers" so authorities can decide whether they're eligible to apply for asylum.

Italy has proposed these "hotspots" be located in the migrants' countries of origin or transit.

Ironically, the tough talk comes as the number of migrants entering Europe is dropping significantly. The U.N.'s refugee agency says around 80,000 people are expected to arrive by sea this year, about half the number from 2017. "We do not have a crisis of numbers. We continue to have a crisis of political will," said UNHCR Europe chief Sophie Magennis.