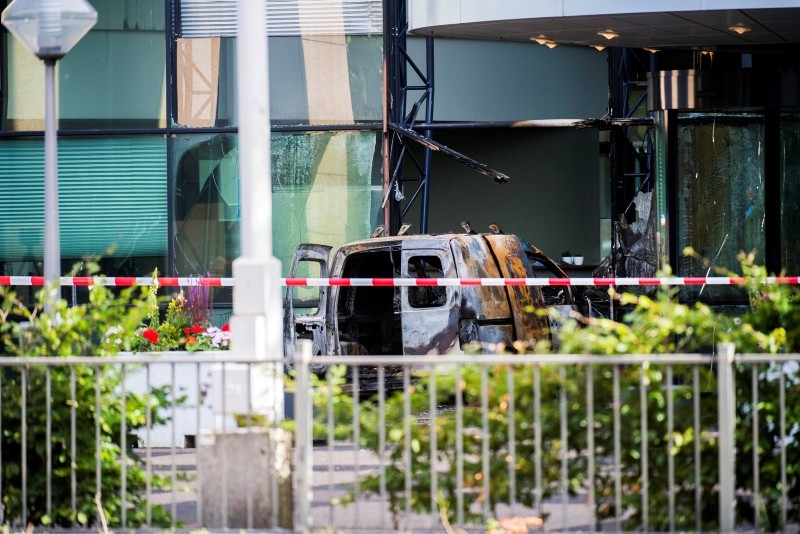 A van is seen burned out after crashing into the glass facade of the head office of Dutch newspaper De Telegraaf in what police said was a deliberate action in Amsterdam, Netherlands June 26, 2018. (Reuters Photo)
by Jun 26, 2018 12:00 am

The head office of the Dutch newspaper De Telegraaf was hit by a delivery van in the small hours of Tuesday in what police said was a deliberate act, but no one was injured.

The building was almost empty at the time.

Editor-in-chief Paul Jansen said the motive was unclear. "Unfortunately, journalism has been a target for attacks more than once", he said. "This is a cause of great concern, but we will not be intimidated."

Prime Minister Mark Rutte described the attack on Twitter as "a slap in the face for the free press and Dutch democracy".

De Telegraaf is the largest daily in the Netherlands, specializing in sports and crime.

Last week, a rocket was launched at an office in the same part of Amsterdam housing several magazines, although no one was hurt. A 41-year-old man was arrested.

The white van crashed into the glass facade of the Telegraaf building on the outskirts of Amsterdam around 4 a.m. (0200 GMT), where it caught fire.

Police said no one was injured, as the building had been empty except for a security guard.

The driver of the van escaped in a getaway car, probably driven by an accomplice, police said. Both suspects remained at large on Tuesday morning.