Russian envoy not welcome in Srebrenica over genocide denial 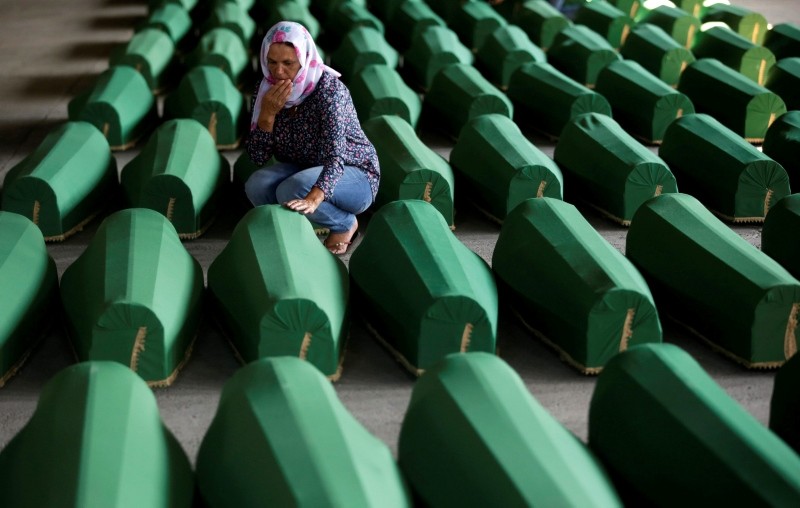 Muslim women cry near coffins of their relatives, who are newly identified victims of the 1995 Srebrenica massacre, which are lined up for a joint burial in Potocari near Srebrenica, Bosnia and Herzegovina July 9, 2016. (Reuters Photo)
by Jun 26, 2018 12:00 am

Relatives of about 8,000 Bosnian Muslims, massacred by Serb forces in Srebrenica, have barred the Russian ambassador in Bosnia from honoring the victims at their joint cemetery because of his denial that the atrocity was genocide.

"Nobody who denies genocide will enter the Potocari Memorial centre," Munira Subasic, the president of an association of Srebrenica mothers, told Reuters by telephone on Tuesday.

In July 1995, toward the end of Bosnia's 1992-95 war, Serb forces swept into the eastern Srebrenica enclave, a U.N.-designated "safe haven."

They killed 8,000 Muslim men and boys in the days that followed, dumping their bodies into pits in what is widely seen as the worst mass killing on European soil since World War Two.

Two international courts, including the U.N. war crimes tribunal for the former Yugoslavia, have ruled the massacre was genocide.

Ambassador Petr Ivancov was supposed to visit Srebrenica and talk to local authorities on Wednesday but cancelled the visit after Muslim Bosniak Deputy Mayor Nermin Alivukovic turned down his request to visit the cemetery.

"Knowing and respecting the attitude of the victims' associations not to allow anyone denying the Srebrenica genocide to enter the Memorial centre, I could not accept the Ambassador's invitation to host him there," Alivukovic told Reuters.

The Russian embassy in Sarajevo confirmed the visit had been cancelled, without providing details.

In 2015, Russia, a long-time ally of Serbia and Bosnian Serbs, vetoed a U.N. Security Council resolution that would have condemned the Srebrenica massacre as a genocide.

That same year, a stone-throwing crowd chased the then Serbian Prime Minister, Aleksandar Vucic, from a ceremony marking the 20th anniversary of the Srebrenica massacre, underscoring the depth of anger over Belgrade's denial of the crime as genocide.

More than 6,500 victims have been buried so far at the Potocari cemetery. This year, the remains of at least 36 victims will be buried on July 11.